Blast: CUFF ME by Lauren Layne

Enter to Win a Custom Mug, $25.00 Amazon Gift Card and a Print Set of FRISK ME and STEAL ME

Vincent knows he's not the most charming of the Moretti brothers. He prefers brooding to flirting, reading to talking, and he sure as hell isn't about to give into his mother's insistence that he 'settle down with a nice girl.' Luckily, Vincent's gig as one of the NYPD's top homicide detectives keeps him busy. As does his long-time partner, Jill Henley–a tough-as-nails cop with the face of an angel and smart mouth that makes Vincent crazy in all the worst ways.


After six years of working the homicide beat with the tight-lipped Vincent Moretti, Jill figure she knows him better than anyone. Which is not at all. But when their most recent case points to a potential serial-killer situation, the higher-ups send them on a rare undercover mission to a place no NYPD officer dares go: the Upper Eastside.


Now the bureau's most antagonistic set of partners is posing as Mr. and Mrs. Brooks of Park Avenue. Spending 24/7 in the suspect's territory brings them closer and closer to their killer . . . and closer to each other. Soon Vincent and Jill are playing good cop/bad cop in and out of bed, and Jill's falling hard. But can she convince Vincent to give her a shot as partner in life, as well as at the bureau? 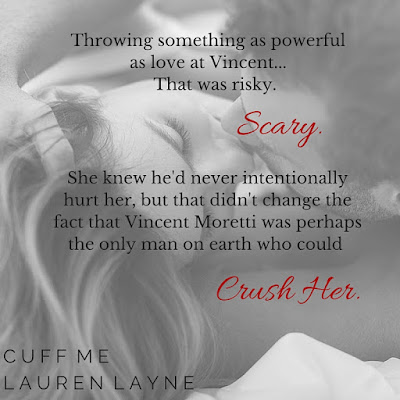 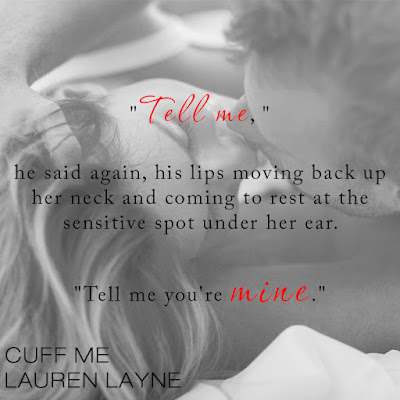 Excerpt #4
Jill gave a happy sigh. “God, I miss doughnuts. Florida doesn’t know how to do them right, and Mom decided that going without sugar was going to be her ‘thing’ during her sixties.”
Elena looked horrified. “No wine? That has sugar.”
“Yeah, I think she conveniently ignores that.”
“How is she?”
“Better now,” Jill said. “Getting her mobility back and all that.”
A broken collarbone and hip were a nasty combination for anyone, but it had been especially hard on Kerry Henley, who prided herself in being an active “young” sixtyyear-old. One day she’d been running a 5K, and then next she’d missed a step carrying her laundry basket down the stairs and been almost completely laid up for months.
It had taken up all of Jill’s personal time plus a couple months of unpaid leave to care for her, but Jill hadn’t hesitated to make the temporary move to Florida.
Her boss had assured her that her job would be waiting for her when she got back, and three months of your life is the least you could do for a parent who’d given eighteen years to caring for you.
Jill’s in particular deserved her devotion; Jill’s dad had dropped dead of a heart attack at forty-one, leaving Kerry to raise a headstrong (read: bratty) daughter all by herself.
“I’m glad she’s better. I love your mom. I wish she’d come up to New York more often.”
“You wouldn’t say that if you had to listen to her complain about the pigeons and the subway and the weather.”
“Could be worse. Last Sunday, my mother actually started a sentence with, “You’re not getting any younger, Elena.”
“I can beat that. Mine suggested freezing my eggs.”
“You’re right. You win. And speaking of your nether regions, I’m so overdue for an update on this Tom guy you’ve been seeing. Did you guys decide to do long distance? Or are you going to wait until you find out if he’s any good at sexting before you cut him loose?”
Jill bit her lip, gathering courage for what she was about to say. For some reason, she’d always pictured this moment as feeling . .. different. She expected feeling giddy and breathless as she made The Big Announcement.
Instead she felt hesitant.
So Jill did what Jill Henley did whenever she felt anything less than sparkles and rainbows.
She faked it.
Jill pasted a smile on her face, took a deep breath, and shot her left hand out in front of Elena’s face.
“What, are you—” Elena broke off, her cool fingers wrapping around Jill’s wrist as her mouth dropped open. “No. Freaking. Way.”
“Way.”
Elena let out an uncharacteristic squeal. “You’re getting married?!”
The words hit Jill with a little slap.
She was getting married.
It felt. .. funny.
Probably because she wasn’t used to it yet.
Elena threw herself across the backseat, arms wrapped around Jill’s neck as she kissed the side of Jill’s head repeatedly.
“Congratulations, darling! When? Do I get to be maid of honor? I won’t wear green, but you know that. How did it happen? How did it happen? Oh yeah, and why did you not tell me?”
Jill managed to extricate herself from Elena’s grip, only to have her left hand held hostage as Elena studied the square-cut diamond with a scary level of scrutiny.
“He asked last night,” Jill said, gazing fondly at the ring. “I thought it was our farewell dinner, and, well, he had other ideas.”
“Hell yeah, he did,” Elena said, ceasing studying the diamond so that she could instead study Jill.
“I wanted to call you last night,” Jill said apologetically. “I so did. But I thought if I could hold off just a few hours, and tell you in person...”
“Forgiven. Of course. I mean, the news is so much better with the ring, you know?”
Let’s hope everyone feels that way. Jill sat in thought as Elena lifted her hand, studying the ring.
Because if she’d been nervous to tell Elena, it was nothing compared to her nerves over telling Vincent. Which made no sense. She and Vin weren’t romantically involved. Had never even come close.
And he might be the most surly grouch on the planet, but he cared about her. Cared about her happiness.
He would be happy for her.
Wouldn’t he?
“I’m thrilled, you know that, right?” Elena asked.
Jill smiled because she knew that tone. “But...”
Her friend bit her lip for a moment, looking uncharacteristically unsure of herself before taking a deep breath. “Okay, I’m just going to come right out and say it. This happened fast. You’ve known the guy three months. You’re all the way sure?”
Jill twisted the ring. “I’m sure. I’m totally sure. You’ll understand when you meet him, El. He’s just. . . he’s just. . . he’s perfect.”
“Perfect, huh? You just got engaged, so I’m going to allow for the hyperbole. But tell me why I should let this guy marry my best friend.”
Jill blew out a breath, wondering how to explain. “You know you meet another person and just get them? It was like that.”
“Explain.”
Explain.


How did one explain Tom Edward Porter and how when you met someone as perfectly right for you as Tom was for her, you couldn’t afford to waste thought on things like soul mates or passion. You just had to go for it.

Lauren Layne is the USA Today Bestselling author of more than a dozen contemporary romance novels.

Prior to becoming an author, Lauren worked in e-commerce and web-marketing. A year after moving from Seattle to NYC to pursue a writing career, she had a fabulous agent and multiple New York publishing deals.