Review: Carrier of the Mark by Leigh Fallon 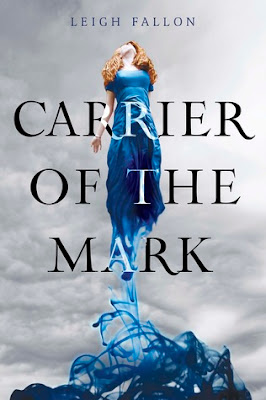 Blurb:
Their love was meant to be.

When Megan Rosenberg moves to Ireland, everything in her life seems to fall into place. After growing up in America, she's surprised to find herself feeling at home in her new school. She connects with a group of friends, and she is instantly drawn to darkly handsome Adam DeRÍs.

But Megan is about to discover that her feelings for Adam are tied to a fate that was sealed long ago—and that the passion and power that brought them together could be their ultimate destruction.


Reese's Review:
I’ve had this beauty on my bookshelf for a long time and when I finally got an actual copy I was ecstatic! Now I have officially read it and dang this book was so not for me it’s sad.

Megan and her father have officially moved to Ireland to start a new life again. After her mother died a couple years ago Megan has been constantly moving. Megan immediately likes Ireland and makes friends fairly easily despite being the new girl from America. When she spots the elusive Adam the hottest guy in school she’s already head over heels in love with him. So basically Twilight if you missed that. Anyway Adam and his family has a secret, they have magical powers and all four of them form a group that could help bring the world into alignment or bring it to it’s knees. Megan not knowing anything about this begins to train with the family after she realizes she can control the air. Megan is “Marked” and if she excepts will carry her mark and her powers forever if the people hunting them for their powers don’t kill them first.

So, let me start with Megan and Adam because what the absolute crap? I did not believe a moment of their romance. I get their “insta-attraction” but it was written so unbelievable I wanted to cry. Megan crush stalks Adam he crush stalks her with his bird and then BAM now they’re in love and planning a future together. No getting to know you or anything. Ms. Fallon you had 342 pages to convince me to care about them and all you did was make me think they have a very unhealthy relationship. Adam when he heard they may not be able to be together almost wiped out an entire town. Yeah peeps. Now maybe I could understand that reaction if every time you two were together the world rained pie but it doesn’t so knock that crap off.

Then there’s Megan who is possibly one of the most selfish characters to date that I have ever read. She can’t make a decision because it could possibly hurt her relationship with Adam so he does everything he can to help and then she starts hurting his feelings about why he’s working so hard. She does this with everybody and never once considers anyone else’s feelings until someone tells her she’s being a butt cake. Now it may be that she’s a teenager and she has some growing to do but she didn’t grow throughout the whole book so yeah not buying what this book is selling.

Lastly the whole “Carrier of the Mark” aspect of this book made no sense to me. A lot of this book is spent explaining the genetics of the mark and how you need to mate with the right person for this set of genes. Okay Hitler because that’s not freaky at all.

If you couldn’t tell by the review I didn’t like this book at all. I did get wrapped up in the story a bit which is why this story doesn’t have a lower review, but that is the only reason. Sadly while I do have the second book I honestly do not care at all about what happens to these characters so yeah goodbye.

I was born in South Africa, raised in Dublin, Ireland and moved to Cork in my 20’s. While living in beautiful Kinsale, Co Cork I discovered a love of writing. I write mainly for the young adult market. My current book, The Carrier of the Mark, prompted me to abandon my ‘riveting’ career in corporate treasury and have been writing ever since. I have another three books in the Carrier series and a few other projects I'm working on. My family and I now share our time between Ireland and the US.