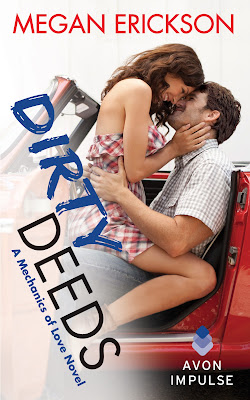 About DIRTY DEEDS
Alex Dawn is saying no to men. No to bad relationships, disappointments, and smooth-talkers. Focusing on her family and her job at Payton and Sons Automotive keeps her mind occupied and her heart content. She doesn’t really miss a man’s touch, until one night, one shows up with the body of a god and a voice from her dirtiest dreams.

L.M. Spencer is only in Tory, Maryland, to scope out the town as a possible site for one of his company's hotels. The British businessman didn’t expect his car to break down or to find the hottest little American he’s ever seen holding a tire iron, piercing him with bright blue eyes.

They agree to one hot night, one dirty deed to burn out the chemistry between them. But from their first kiss, Alex can’t stop saying yes to this man. And when Spencer’s company threatens everything she cares about, they must make the choice to stand together or apart.


Reese's Review:
I received an ARC of Dirty Deeds for an honest review.

I was super excited for the chance to read Dirty Deeds after reading Dirty Thoughts and Dirty Talk the first two books in this series. When I found out Ivy’s sister Alex was going to be getting a book I couldn’t have been happier. Alex more than anything deserved a happy ending.

Alex Dawn is working late one night since she didn’t want to go home to an empty house now that he sister is gone when a British man named Spencer comes rolling in with car troubles. At first he’s kind of a jerk, but offers to take Alex to dinner and then they get frisky. They both thought it was for one night but now Spencer is sent back to work in Tory to build a hotel. The two meet up again, sparks fly and they put a two-week expiration date on it. They both start to get feelings, work and New York get in the way and they think it’s over when Spencer’s best friends husband ruins everything between them (he’s a douche).

I seriously enjoyed Dirty Deeds. Alex and Spencer grew so much throughout this book and they were so perfect together.

Alex was previously in an abusive relationship. She got out but doesn’t know how to trust herself around men anymore. While Spencer shows her that she is good enough to be loved, she makes the realization on her own and grows a lot from their relationship and time apart.

Spencer wants to get away from his past but everything about Alex and her family scream out that he bellows with her and to not shed his past completely. He grows from kind of an awkward snob to a strong independent dude who takes what he wants and doesn’t just follow what he thinks he wants.

Overall fantastic story with lots of romance and character growth.


Being alone was lonely, but at least it was safe.

Megan Erickson grew up in a family that averages 5’5” on a good day and started writing to create characters who could reach the top kitchen shelf.