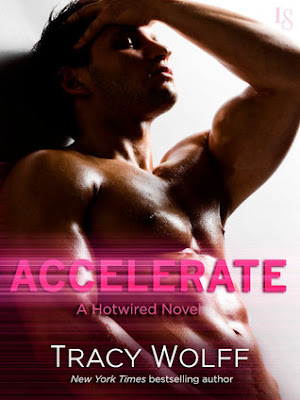 
Blurb:
A sexy carjacker takes a would-be starlet for the ride of her life as a pulse-pounding new series from New York Times bestselling author Tracy Wolff begins.

Once the brains behind a car-boosting ring, Nic Medina has spent the last three years playing it straight. Now drag racers flock to his L.A. auto shop, Hotwired, for a shot at going head-to-head with the man himself. But when a crooked cop gives Nic a treacherous ultimatum—steal ten high-end cars or watch his nephew disappear into the system—he makes the only choice he can, one that puts the life he’s worked so hard for at risk. No sooner does Nic agree than he spots some nasty competition—and a gorgeous bystander in harm’s way.

A small-town girl with Hollywood dreams, Jordan Bass never expected to be swept up in a real-life drama. But that’s exactly what happens when she witnesses a violent crime. And when a smoldering stranger takes the wheel and practically kidnaps her in a desperate bid to keep her safe, she’s not sure whether to scream . . . or kiss him. Nic’s bad news—but the real bad guys aren’t above silencing a witness. On a collision course with danger, Jordan finds herself falling for the man whose street smarts are keeping her alive . . . and whose touch puts her in high gear.


Reese's Review:
Accelerate has to be one of the best books I have read this year, and considering I’m close to having read 300 books this year, that is saying something.

Jordan bought a car at a police auction and needs to get the inside remodeled. Heading to a drag race with one of her friends she meets a guy who does remodels, and that’s also where she meets Nic Medina. Jordan has lived a solitary life ever since her sophomore year of college when everything went wrong. Now trying to put her life back together all she has is her car, her apartment, and her job. It’s nothing special until Nic Medina comes to steal her car, steals her with it and brings her into his world of car repair and car-jacking for a dirty cop. Nic didn’t want to bring anyone into the bad situation he has going on, but after kidnapping Jordan from work she doesn’t leave him any choice.

I seriously loved this book. Everything about it was just fantastic. The writing was off the charts and the whole story was so original and fast-paced and breathtaking I honestly didn’t put this book down to even eat. There’s kidnapping, and dirty cops, and drugs, and fights, and off the charts sexiness and romance, and fast cars. I seriously couldn’t have asked for more in a story than what I got in Accelerate.

Jordan’s past is dark and she deals with a lot of issues because of her past. I didn’t really know for sure what happened until later in the book, but a lot is implied and seriously messed up beyond belief. Despite all that Jordan who I thought would be a kind of weaker character because of the trauma she endured was a super strong and feisty female lead, which as totally me favorite kind. Jordan goes through a lot in this book and becomes and even stronger character in the end, which I loved.

Nic Medina is a yumsicle for real. He was in prison after a dirty cop busted him, so I thought I was going to get a cold hard alpha male character. Nic Medina while totally an alpha male is honestly one of the most caring, sweet male leads I’ve ever read about. When he cares about someone he loves them hard and would give his life to protect them. He carries a lot of guilt over anything bad that happens to anyone he loves, but Jordan and his family help out a lot with that. Seriously Nic had to be one of my favorite lead characters yet.

I can’t wait to read the next installment since Accelerate left on a cliffhanger. I loved this story so so much. If you are into awesome fast paced romance with a REAL story in it this is the book for you. I was so happy to not be reading just another story where the two characters just have sex all the time. Accelerate has an actual story with romance on the side.

Tracy Wolff collects books, English degrees and lipsticks and has been known to forget where—and sometimes who—she is when immersed in a great novel. At six she wrote her first short story—something with a rainbow and a prince—and at seven she forayed into the wonderful world of girls lit with her first Judy Blume novel. By ten she’d read everything in the young adult and classics sections of her local bookstore, so in desperation her mom started her on romance novels. And from the first page of the first book, Tracy knew she’d found her life-long love. Now an English professor at her local community college, she writes romances that run the gamut from contemporary to paranormal to erotic suspense.< And for all of those who want the unedited version: Tracy Wolff lives with four men, teaches writing to local college students and spends as much time as she can manage immersed in worlds of her own creation. Married to the alpha hero of her dreams for twelve years, she is the mother of three young sons who spend most of their time trying to make her as crazy as possible.