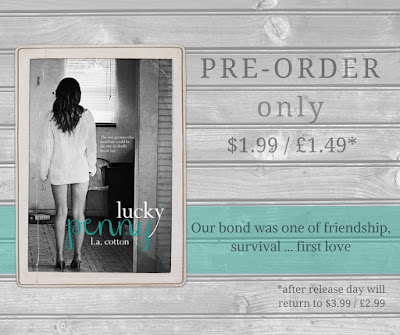 Synopsis
I was his lucky Penny. He was my light in the dark, hope in despair. Our bond was one of survival, friendship...first love.

But then we were ripped apart and Blake Weston became the memory I turned to when everything else in my life fell apart.

Seven years later, a summer working at Camp Chance is supposed to be my fresh start. Beautiful scenery and the chance to better the lives of foster children - kids like me. But when my eyes land on him across the fire, time stands still and feelings come rushing back to the surface. I thought I'd moved on, tucked him away in my heart. One look into his soulful blue eyes and I know I'm wrong. Blake Weston can heal the broken parts of me. Restore my hope. Love me.

It's our second chance. A sign we are supposed to be together.

But in my twenty-three years, Blake Weston might just be the first thing I won't survive. 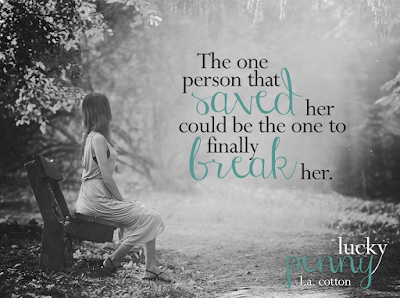 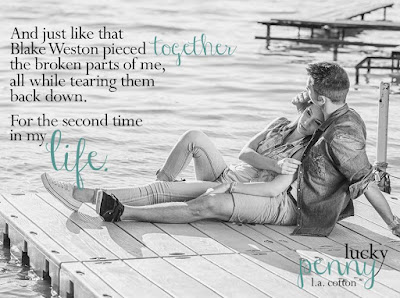 Excerpt
Blake    The next words lodged in my throat. What was I supposed to say here? I didn t do this I didn t bare myself to people. Let alone to the one person who had known me so well once upon a time.

Don t, Penny. Not tonight, just enjoy this. Just this.  His thumb rubbed circles along my hand.

Finding comfort in his words no matter how cryptic I allowed myself to let go. At that moment, I wasn t broken Penny trying to find the right words to say to the guy who had once been my world. I was just a girl lying next to a boy watching the stars.

Blake sighed quietly as if he was about to say something more, but when his body relaxed again, I knew the moment had passed. Maybe some things were just too hard to say better left unsaid. Life had taught me never to take for granted the good moments because they always ended. And no sooner than we had lay down in the grass, Blake let go of my hand and rose to his feet.

We should probably get back.

Okay,  I said unable to meet his eyes.

The buzz I had felt earlier following Blake into the night ebbed away and was replaced with something much more unsettling. Was this his way of saying goodbye? We still had a little over a week left; there was still time, and we were both returning to Columbus. It was goodbye but not forever. I hoped.

The short walk back to cabin row was awkward, and I fell into old habits, hugging myself tight. Blake seemed just as tense, his hands jammed in his cargo pockets and his hood still pulled up over his head. The path started to widen like the pit gnawing in my stomach. The lost me wanted to flee back to the cabin, close the door, and hide away from the emotional turmoil warring in me, but the stronger me the me I had become thanks to Camp Chance didn t want to leave things like this.

Blake closed the distance between us and stood almost toe to toe with me. His eyes locked on mine and he stared down at me; full of unspoken promise, his gaze sent my heart into overdrive.  I shouldn t have waited so long to do this.  His hand brushed along my jaw and into my hair drawing me close to him. He leaned down and covered my mouth with his own.

And I let him.

My body didn t just fall against him; it melted. His touch. The feel of his lips moving against mine. How did I ever let myself forget this? Force myself to forget? His smell. The way he tasted as his tongue licked the seams of my lips before parting my mouth.

Since my first kiss, at the age of fourteen, I had kissed only three other guys: Bryan, Michael, and Cal. Bryan made me cry because he didn t understand my anxieties, Michael was patient and kind as we explored my boundaries, and Cal made me feel nice. But none of them came close to making me feel the rainbow of emotions I was experiencing wrapped in Blake s arms.

I didn t ever want it to end.

Join L.A.'s fan group for the latest giveaways and ARC's