Synopsis
When Sawyer Reed wants something, he gets it.

And I WANT her.
She doesn’t know it yet, but she’s already mine.

Her resistance is futile because once I start a play, I always follow through.

And I ALWAYS win. Nothing, not even the deep-seated hate I have for my rival, Jacob Byrd, is going to keep me from my endgame. And my endgame is Gretchen Cole.

But I have to keep my head in the game. Everyone knows what happens to a quarterback when he loses focus. He gets SACKED.

Reese's Review:
Sacked was an interesting story. I honestly at the beginning hated Sawyer. He was absolutely disgusting with the way he thought about people and girls and was just an all around douche bag. He gets better throughout the book, which is one of the only things that made this book bearable because he’s a really douche canoe.

Sawyer is a football player. He was a big time player in high school and now he’s big in college as well. He gets all the girls he could ever want, but there’s no challenge until Gretchen. She pushes him and denies him at every turn and now Sawyer will do everything he can to have her.

Gretchen has ulterior motives for wanting to hang out with Sawyer. Her cousin and Sawyers worst enemy Jacob is dying and it’s his final wish to say goodbye and clear up what happened all those years ago. Gretchen thought it would be easy, but then she starts falling for the non-douche Sawyer and things become complicated.

I enjoyed Sacked. I thought some of the stuff Sawyer did and thought in the book were honestly so disgusting I kept thinking they were thrown in for effect more than anything. I loved Gretchen right away, her character was one of the only reasons I kept reading until Sawyer got better.

Sacked was a good enjoyable hot read. Tabatha Vargo did a great job. 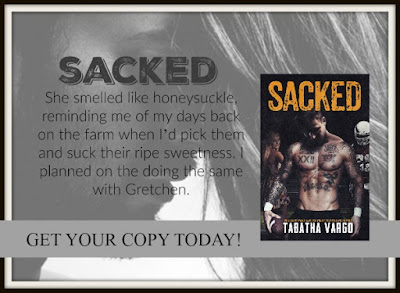 Excerpt
Pulling away, he looked down at me, a sexy grin on his face. “You’re so fucking sweet, baby,” he whispered. “I bet you taste sweet, too.”

I moaned loudly as he slipped his finger inside the lace covering me and swiped it softly across my throbbing center. Before I could really begin to enjoy it, he pulled his glistening finger out and sucked it between his lips. Seeing him taste my juices turned me on in a way I never imagined and the throbbing intensified.

“Mmmm. Honeysuckle.” He closed his eyes and sucked once more at his finger.

I moved to lean into him, but before I could, he dropped to his knees in front of me. His hands moved up my outer thighs, taking my dress with it, and then he was peeling my boy shorts off. Cold air rushed over my soaked folds as he shuffled them down my thighs to my knees and over my boots. And when I lifted my foot to help him take them off, he smiled to himself.

This was really happening, and I wasn’t sure I could stop it even if I wanted to. I was too far gone. I don’t know if it was the last few weeks of mental foreplay or the alcohol I’d consumed, but the second he slipped his hot tongue between my folds and sucked me, I didn’t care what happened. I only knew he was soothing the throbbing ache.

“Sawyer,” I whispered as my head fell back against the door with a thump. “Ah, God.”

I’d never let anyone in my personal space this way, but damn if I could stop him. The sensations that spread through me as he feasted on my sensitive flesh were beyond amazing. I found myself whining like a little bitch and begging with my moans for him to keep going.

My fingers moved into his hair, holding him to my body. Lifting my leg onto his shoulder, he opened me to him as he continuously licked and sucked, sending my body into a frenzied state.

Instead, he pushed a single finger into me and slowly began to work it in and out. My knees began to shake, the door the only thing holding me up, and I panted as the sensation of release slowly began to move over me.

Sliding a second finger into me, he worked back and forth and in and out. His tongue twirling my hardened nub before softly sucking, and I was done. 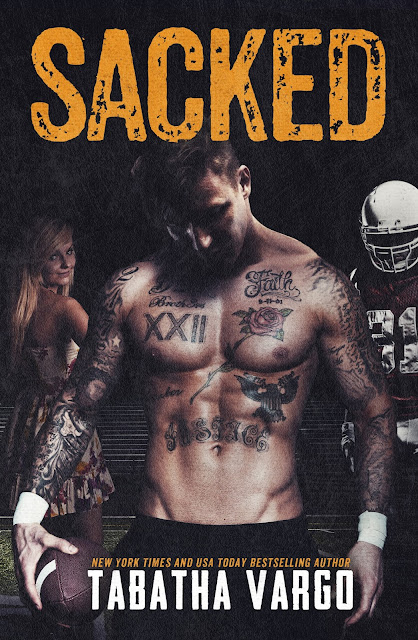 Author Bio
Tabatha Vargo is a NEW YORK TIMES and USA TODAY bestselling author, but mostly she's a boring control freak with a severe case of OCD and ADD. Oh look, something shiny. She's a South Carolina girl who loves old historical anything, wind chimes, and all things romantic and smutty. She's the mother of an 10 y/o tomboy and the wife of her very own Prince Charming.

When she isn't writing, she's texting book ideas to herself, hanging out with her family and friends, or reading. 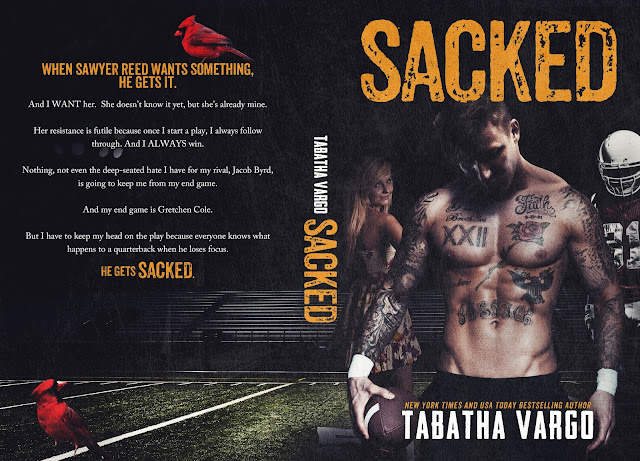