Review: If You Dare by Kresley Cole 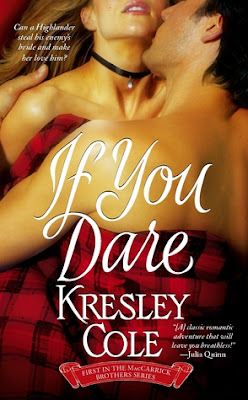 Can he exact revenge?

High in the Pyrenees, a band of mercenaries led by Courtland MacCarrick wages war for General Reynaldo Pascal. When Court turns on the evil general, Pascal orders him killed but Court narrowly escapes and exacts revenge by kidnapping Pascal's exquisite Castilian fiancée.
Can she deny her passions?


Lady Annalía Tristán Llorente despises her towering, barbaric captor almost as much as she does Pascal. Her inexplicable attraction to the Highlander only fuels her fury. But nothing will stop her from returning to Pascal -- for if she doesn't wed him, she signs her brother's death warrant, as well as her own.
Can there be love between them?

From the moment Court discovers that Anna's prim façade masks a fiery, brave lass, his heart's ensnared, and he dares to defy the curse that has shadowed his life -- to walk with death or walk alone. But Pascal vows that he'll hunt the two, never stopping until he's destroyed them both.

Reese's Review:
Lady Annalia's brother has left to fight the Pascal so that he and Anna will be safe. They're part of a high-ranking family but have been outcast due to family shame. Pascal knows about Anna and when he kidnaps her brother and threatens to kill him if she doesn’t marry him. Anna thinks she safe when she saves Court a Scottish mercenary and asks him to help her. When he eloquently declines she knows she has to take matters into her own hands. That’s when Court decides to claim what’s his. Court finds Anna attractive from the minute his eyes open to her helping him. The more time he spends with her the more he likes and the more she gets under his skin. When Court finds out about Anna’s predicament he gets his men and sets out to keep her safe and to kill Pascal and his assassins down before he can kill them.

I have loved Kresley Coles books for a long time now and If You Dare is no exception to that rule. Kresley Cole seems to always have those sexy alpha males with even stronger women. Some of my favorite kinds of stories.

Anna is definitely a strong female lead. She would do anything for her family and even though Court is a total jerk sometimes she puts him in his place and doesn’t allow him to walk over her. She outsmarts him a lot and when she becomes injured she stays strong no matter what. Seriously she kicks butt. I loved her interactions with Court, especially at the beginning of the book where they are constantly at odds with one another. It’s hilarious and full of sexual tension, which is fan worthy.

Court is a Scottish mercenary who was hired by Pascal do kill some people. When he’s betrayed and almost killed Anna saves him and fixes him up. He is one of the worst house guests ever. He’s a total douche for most of his stay. He snoops around Anna’s house. He threatens Anna and her house friend, uses up all her food, invites his friends over and treats Anna like crap for a lot of his stay. He and his family have been cursed and he isn’t allowed to love anyone or they or he dies. He doesn’t get close to women and he’s unable to get women pregnant due to the curse. The curse has hurt his entire family and killed his brother so he tries to stay far away from Anna and her awesomeness.

I loved the action, the characters and the romance in this amazing story. Kresley Cole did another amazing job with this series. I can’t wait to read the sequel. 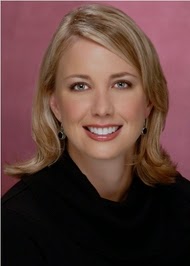 A master’s grad and former athlete, she has traveled over much of the world and draws from those experiences to create her memorable characters and settings.
Her IAD books have been translated into twenty foreign languages, garnered three RITA awards, and consistently appear on the bestseller lists, in the U.S. and abroad.