BEFORE THE STORM by Leslie Tentler

No Matter How Far You Run, The Past Will Find You


Leslie Tentler is back with another story of romance and suspense…this time in a small Southern beach town called Rarity Cove. What happens when a woman on the run has her dangerous secrets finally catch up with her? Find out in Before the Storm by Leslie Tentler… 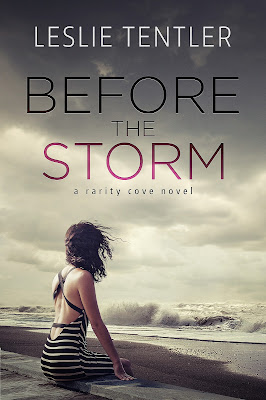 About BEFORE THE STORM
Six years earlier, Trina Grissom disappeared, on the run for her life. Now living under an assumed identity—as Samantha Marsh—she still struggles with the dark secret she harbors and the fear she might one day be found. When she moves to the coastal town of Rarity Cove, South Carolina, to open a café, a handsome widower begins to chip away at the walls she’s built to protect herself.


Mark St. Clair lost his wife two years ago in a tragic accident. Head of the grand St. Clair resort, he distracts himself from his lingering grief by running the family business and caring for his troubled young daughter...until a beautiful restaurateur sets up shop in town. Before meeting Samantha, Mark was convinced he could never be drawn to another woman. But as his attraction to Samantha grows, the mystery surrounding her deepens.


As the two begin a hesitant courtship, double perils emerge. Someone from Samantha’s lurid past comes calling, threatening to expose her. And a powerful hurricane is forming in the Atlantic with the small beach town in its path. Trapped in the storm by the brutal man who wants vengeance on Samantha, she and Mark must fight for their lives.
On Sale in Digital and Print: October 20, 2015
Amazon       B&N
Kobo       iBooks
Add BEFORE THE STORM to your TBR pile on Goodreads!
Check out other books from Leslie Tentler!

EXCERPT – BEFORE THE STORM
“Emily?” Mark St. Clair looked around crowded Main Street. She had been right here, watching as a clown with a painted face and red wig twisted balloons into barnyard animals.
He scanned the street vendors hawking pecan pralines and tourist souvenirs. But there was no sign of a blond, pigtailed almost-five-year-old. He had turned his back for what? Ten seconds? On the street in front of him, the parade continued. An open convertible rolled past, a smiling Miss Peach Blossom waving regally from its backseat. He tamped down a surge of panic.
“Mark St. Clair, as I live and breathe!” A heavyset woman wearing too much perfume stepped into his path. He recognized her as head of the Junior League. “Happy Founder’s Day! I do believe your great-great-great-grandfather would be so proud of our little town.”
“Thanks. Nice to see you, Mrs. Botwin.”
“I was just at the hotel last weekend. Tell your chef the pork tenderloin was out of this world—”
“I’m glad to hear it.” Mark smiled thinly, and with a polite excuse, he shouldered past, peering down the sidewalk for his daughter. As he searched, he tried not to think about the child-abduction stories that scared the bejeesus out of him, but he still couldn’t keep his heart from racing. It was early August, the humidity high, and his Ralph Lauren sports shirt stuck to his back. In the balmy afternoon breeze, the cloying aroma of cotton candy mingled with the briny sea air.
Don’t panic, he told himself. But if Emily...if anything happened to her...
He wouldn’t survive another loss.
A break in the parade allowed him to catch a glimpse of the town square with its ancient live oaks and garlands of Spanish moss. A number of vendors had booths set up there, a banner overhead proclaiming The Perfect Summer in Rarity Cove.
Relief washed through him. Amid the throngs of people, he spotted a small red skirt and sandals, then flaxen pigtails reflecting sunlight. Emily stood at one of the cloth-covered tables. What had he told her about crossing the street? He waited until a squadron of Shriners from the Masonic Lodge marched past in their red fezzes, swords drawn, then went after her.
“Emily,” he called, catching her attention. She turned, beaming as he approached, and Mark felt his anger evaporate. He knelt in front of her. “You scared me to death, sweetheart. You were supposed to be watching the clown make balloon animals. Didn’t you want one?”
Instead, Emily pointed at the table, bouncing with excitement. An impressive assortment of pastries was enticingly arranged, and not of the Ladies Garden Club bake sale variety. Sophisticated tartlets held jewel-like curds, and an arrangement of buttery linzer cookies and shell-shaped madeleines filled a silver platter. Decadent lemon bars and rich cream puffs looked nearly too perfect to eat. But most notable were the cupcakes. Each was a work of art, with thick caps of buttercream frosting and edible flower decorations.
“I told her she could have one, but she needed to get her parents’ permission first.”
Mark looked up at the comment. A slender, dark-haired young woman in a sleeveless white blouse stood behind the table. Doe-like brown eyes complemented delicate features. She was attractive—beautiful, actually. As he stood, he caught a glimpse of her long, tanned legs in faded jean shorts.
“She doesn’t say much, does she?” She smiled at Emily. “I asked her name, but she wouldn’t tell me.”
“She doesn’t really...talk,” Mark explained, his chest tightening. “Her name’s Emily.”
The woman nodded as a faint frown creased her forehead. “I see. Can she have a cupcake?”
“Sure. Which one do you want, baby?”
Emily pointed to a rich-looking confection, causing the young woman to laugh. “A girl after my own heart. That’s the devil’s food. It’s chocolate-filled. The little purple flowers are lavender.”
Mark noticed one with a deep red base and pristine white icing. A miniature rosebud sat on its top. Seeing that it had caught his attention, she said, “That’s red velvet, of course. A Southern favorite.”
“We’ll take that one, too.” Their eyes met briefly, until the woman lowered her thick lashes and busied herself with placing the two large cupcakes in a white cardboard box. She tied the package with a blue satin bow and presented it to Emily, who practically danced in delight.
Mark reached for his wallet. “How much?”
“No charge. I promised one to Emily.”
“How about mine, then?”
“All right. That’ll be three ninety-five.”
He shook his head good-naturedly. “Four bucks? That must be one heck of a cupcake.”
She grinned as he handed her the bills, his fingers briefly brushing hers in the process. Mark experienced a small thrill of attraction, followed nearly as quickly by a sharp stab of guilt that made it hard to breathe. His eyes fell to the printed sign in front of the table. Café Bella.


The place must be new; he’d never heard of it, and Mark could count the better restaurants in the small coastal town on one hand. He’d never seen the woman before, either. He realized that he should introduce himself, ask her name or at least the location of the eatery. But instead, he murmured a hoarse thank-you and took Emily’s hand. They made their way across the street after several more parade floats sailed past.


CELEBRATE THE RELEASE WITH A GIVEAWAY!
Grand Prize: $25 Amazon or B&N gift card
Two runners-up will receive their choice of an ebook from Leslie’s backlist
a Rafflecopter giveaway

Author Bio:
Leslie Tentler is also the author of FALLEN as well as the Chasing Evil Trilogy (MIDNIGHT CALLER, MIDNIGHT FEAR and EDGE OF MIDNIGHT). She was a finalist for Best First Novel at ThrillerFest 2012, and is a two-time finalist for the Daphne du Maurier Award for Excellence in Mystery and Suspense. She is also the recipient of the prestigious Maggie Award of Excellence.
Leslie is a member of Romance Writers of America, International Thriller Writers, and Novelists, Inc. A native of East Tennessee, she currently resides in Atlanta.