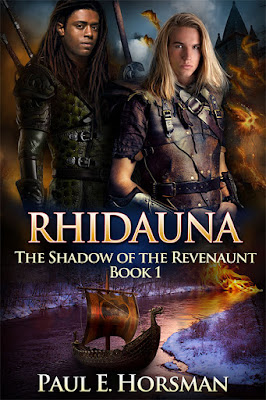 SYNOPSIS
The night before his Coming-of-Age, Ghyll and his two friends escape their castle on a clandestine boar hunt that will forever change their lives. The hunt proves a disaster, and with one of them badly wounded, they return just in time to see their island castle destroyed by macabre warriors from a dragon boat, and by flocks of fire-breathing birds. Ghyll's eighteenth birthday turns into a nightmare as they flee into the night.

Now begins an epic journey to find out who is trying to kill them – and most importantly, why?
Fortunately, they can count on the help of new friends, including a sometimes overly enthusiastic fire mage, an inexperienced paladin and a young beastmistress who is also a ferocious mountain lioness. It soon becomes clear that not one but several sorcerers want to kill them. Are those blackrobes really followers of a terrible, long-forgotten organization? 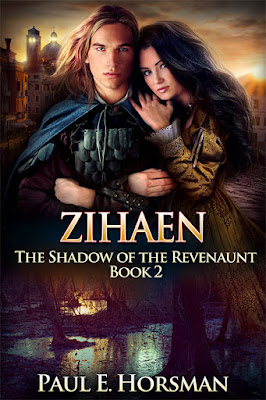 SYNOPSIS
And whose cold hand reaches across the boundaries of space and time to crush weakened Rhidauna?
How did his parents and brothers die? Where their deaths really accidents, or were they killed? These questions young Ghyll Hardingraud must answer before he can ascend Rhidauna's throne.
Ghyll’s search for the truth leads him and his Companions on a journey back to the past as he slowly unravels a dark conspiracy.
Once crowned, the young King Ghyll still has to finish the mission his dead uncle imposed on him. The journey takes him and his trusted friends through inhospitable lands and dangerous swamps to the endless steppes of Zihaen, looking for the Voice from the West. He discovers he isn't the only one. His vindictive enemy pursues him, aided by undead forces.

days.’ Straight-faced, the sergeant nodded at the steaming mugs.
The strong fumes made Ghyll reel as he took a sip. By the gods, mully! he thought.  The hot spiced cider returned some feeling to his body as he drank it all, gasping and with tears in his eyes.
With a nervous glance at the door, the soldier snatched the empty mugs away and left.
Moments later, a young officer in the blue and silver of the Guard in Gromarthen entered the room. He paused in the door and raised his eyebrows. ‘Well, who have we here?’
Ghyll lifted his chin. ‘Lieutenant...?’
The guards officer came to attention and bowed. ‘Davall. And who are you, sir?’
‘I’m Squire Ghyll Denhalf from Tinnurad with an urgent message for the lord burgrave.’
Davall looked the young men over. Like the sergeant, their weary faces and soaking wet hunting clothes must have conveyed their urgency, for he nodded. ‘You’ve never been in Gromarthen before, Squire?’
Ghyll shook his head. ‘No.’
‘I’ll ride with you.’ Davall turned to the sergeant. ‘Have the Squire’s horses brought, please.’
The sergeant saluted. ‘You heard the lieutenant,’ he shouted to his men. ‘What’s keeping those horses?’
Once they were mounted, Davall seemed to hesitate. ‘I don’t want to pry, but to brave the Tinnurad trail in this weather is a desperate move. You bring bad news?’
Ghyll’s face worked. ‘Yes,’ he answered in a hoarse voice.
The lieutenant accepted his reticence and without another word led them into the town. 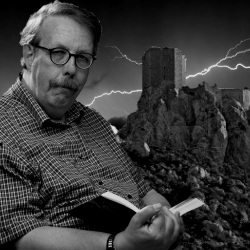 
Paul E. Horsman (1952) is a Dutch and International Fantasy Author. Born in the sleepy garden village of Bussum, The Netherlands, he now lives in Roosendaal, a town on the Dutch-Belgian border.


He has been a soldier, a salesman, a scoutmaster and from 1995 till his school closed in 2012 a teacher of Dutch as a Second Language and Integration to refugees from all over the globe.


Being unemployed and economically overage, yet still some years away from retirement, he is a full-time writer of epic light fantasy adventures. His books are both published in the Netherlands, and internationally.