Review: Desire of the Dead by Kimberly Derting 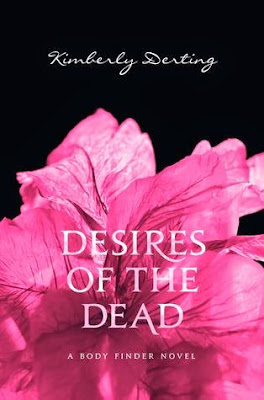 Blurb:
The missing dead call to Violet. They want to be found. Violet can sense the echoes of those who've been murdered and the matching imprint that clings to their killers. Only those closest to her know what she is capable of, but when she discovers the body of a young boy she also draws the attention of the FBI, threatening her entire way of life.

As Violet works to keep her morbid ability a secret, she unwittingly becomes the object of a dangerous obsession. Normally, she'd turn to her best friend, Jay, except now that they are officially a couple, the rules of their relationship seem to have changed. And with Jay spending more and more time with his new friend Mike, Violet is left with too much time on her hands as she wonders where things went wrong. But when she fills the void by digging into Mike's tragic family history, she stumbles upon a dark truth that could put everyone in danger.

Desires of the Dead takes place almost immediately after The Body Finder. Violet isn’t quite over what happened when a serial killer attacked her and almost murdered her. Now she’s trying to piece her life back together with her adorable best-friend boyfriend Jay and be a normal girl. Only she’s not normal and her gift to find the dead is landing her in trouble after she finds another body. Now the government wants to know what she can do. To top it all off she’s keeping secrets from her parents and Jay because she’s afraid they’ll get hurt like they did last year.

I really enjoyed this sequel a lot especially because while paranormal it’s very realistic YA issues make me love this series all the more. Violet’s boyfriend Jay has gotten a new friend and Violet has to deal with her jealousy. I absolutely loved that aspect of the book. It really made this book for me since I remember being like that (I’m still totally like this) when I started dating my fiancée. What can I say I’m greedy with my time with him? Lol Anyway I also loved how the dynamic between Jay and Violet changed because they aren’t just friends anymore, which left a lot of new issues for their relationship.

Violet almost died and so did Jay and so in Desire of the Dead we see her struggle more with her gift than we had in the first book. She doesn’t want to be different and she isn’t sure how to handle her gift anymore now that she has faced down her own death. Violet doesn’t ignore her gift in this book so she ends up going on solo missions which get her in danger and then she keeps it from her family and from Jay. While she used to tell him everything she doesn’t want him to get hurt so she tries to protect him and ends up getting their relationship some troubles. I really like Violet’s character I think she’s strong and independent which is something I love in any protagonist I read so she really is awesome to me.

Jay wasn’t in this story as much as before but he is such a sweetie and I like him a lot.

Rafe if you’ve read the anthology for this story makes an appearance in this book and I can’t wait to see how his appearance changes things for both Violet and the story as a whole.

The one issue I had with this whole story, which shouldn’t really be an issue but it was was how Violet couldn’t ever make up her mind about anything. She was constantly going back and forth between talking to the FBI, talking to Rafe, talking to Jay, talking to her parents or her friends and it became tiresome when she never made a decision. I just wanted to her decide and I know being a teenage with powers has to be difficult but ugh please decide! I already know what you should be doing!!!

Seriously enjoyed this story and can not wait for more awesome! 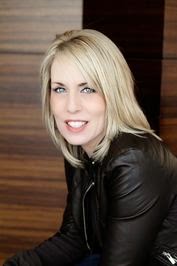 Kimberly Derting is the author of the award-winning THE BODY FINDER series, THE PLEDGE trilogy, and THE TAKING and THE REPLACED (the first two books in THE TAKING trilogy).

Her books have been translated into 15 languages, and both THE BODY FINDER and THE PLEDGE were YALSA Best Fiction for Young Adults selections.

She lives in the Pacific Northwest, where the gloomy weather is ideal for writing anything dark and creepy. Her three beautiful (and often mouthy) children serve as an endless source of inspiration and frequently find the things they say buried in the pages of their mother's books, or on Twitter for the world to see.