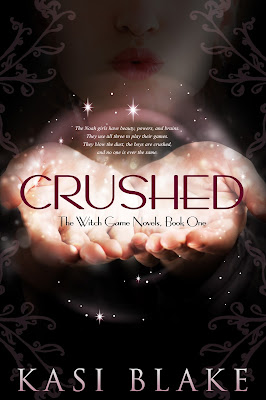 CRUSHED by Kasi Blake is the first book in a young adult paranormal romance series  called— The Witch Games.

I had just finished writing my vampire series, and my agent couldn’t find a publisher for it even though she worked for one of the top agencies in New York City. We kept hearing the same thing over and over: the market is saturated with vampires.

So, my agent suggested I move onto a new series and put the vampires behind me. We talked about paranormal creatures. In essence, what haven’t we seen again and again?

Witches was just one thing on a long list, but when I got to it and really started to think about it, the possibilities seemed infinite. Since I knew my characters would be in high school, I asked myself a question. What would I have done back then if I had magical powers?

I made another list. There were a lot of things to choose from. I might use the power to make myself popular, get better grades, or make my parents disappear. Just kidding. The idea I found most intriguing was that I would put a love spell on the boy of my dreams.

This made me think about the movie The Craft, and I didn’t want to go in that direction. I also didn’t want it to be like Sabrina, The Teenage Witch with lots of laughs and silly stuff. I wanted something in the middle, so I decided to have three sisters playing a game at school that they call Crushed. The name comes from the fact that you can’t (even in movies) make someone love you. It always goes horribly wrong. But, maybe, you can give the person a little crush.

There are so many ways this spell could go wrong, and I enjoyed exploring them. But, I didn’t want to be too obvious, so I threw in a mystery. What happens if someone else, an enemy, somehow uses the Crushed spell against them? Hmm.

The Noah girls have beauty, powers, and brains.

They use all three to play their games.

They blow the dust, the boys are crushed, and no one is ever the same.

Each year the Noah girls play a secret game― Crushed. The rules are simple.

1. Use wisdom to pick your target. The boy can't be too weak or too strong-willed.

2. Blow the enchanted dust into your target's face to enchant (Crush) him.

3. Give verbal commands and assign them tasks to perform throughout the year. The more tasks completed, the stronger the witch's power grows.

4. At the end of the year, the witch with the most power wins cold, hard cash.

As if being a witch in high school isn't complicated enough, Kristen picks the wrong boy to Crush. Zach is tall, handsome, and a little scary. Her Crush spell isn't working on him like it has with the others. In fact, he is behaving the opposite of every other boy she's Crushed, hating her instead of adoring her. Something is definitely wrong. After someone attempts to kill her, Kristen realizes there is more at risk than a few hundred dollars. She may be betting with her life.


Reese's Review:
Crushed is about three sisters who are witches. They play a secret game every year where they find a boy to Crush on. Kristen the third sister, sick of being reliable decides to pick her hardest crush yet, Zach. Zach doesn't want anything to do with the Noah sisters or Kristen's Crush game. However, the more Kristen pushes to find out why Zach isn't falling for her, the more she starts falling for him. Too bad someone is trying to kill her and the killer is more than willing to sacrificing everything to get what they want.

Crushed was a fun book. I was a little bored at times with the constant description and I didn't really connect with any of the characters. Despite that I really enjoyed all the surprises Crushed held. 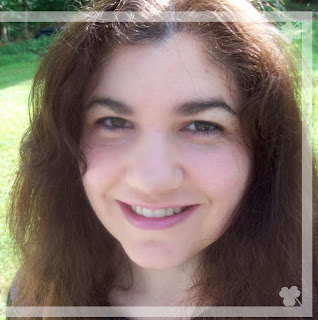 When Kasi Blake was in the third grade, she found out that a good story could get her out of trouble. Okay, some people call it a lie, but she didn't see anything wrong with using every skill available to her to avoid being grounded. Over the years, that didn't change. Her stories just grew more elaborate. When she was 12, she began to write them down, starting with a six-page tale about a boy from the wrong side of the tracks and the good girl that secretly wanted him. Kasi went on to write for Harlequin for a few years. Then, she published a vampire series on her own, and now she is publishing with Clean Teen.

Get ready for an exciting series on witches using their powers to play dangerous games at school. The first is Crushed. You can find her on Twitter @kasiblake, on FB, and she has a website under her name.

Kasi lives on a farm in the Midwest with tons of animals including cows, ducks, chickens, a dog, and cats. 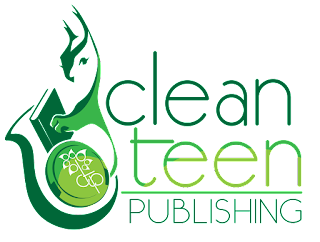