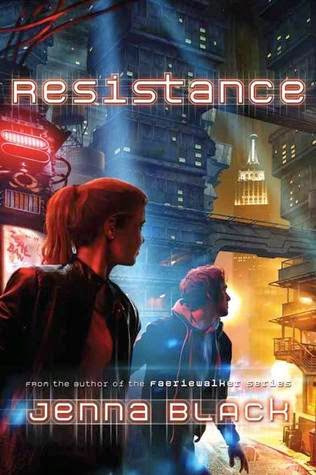 Nate Hayes is a Replica.

The real Nate was viciously murdered, but thanks to Paxco’s groundbreaking human replication technology, a duplicate was created that holds all of the personality and the memories of the original. Or...almost all. Nate’s backup didn't extend to the days preceding his murder, leaving him searching for answers about who would kill him, and why. Now, after weeks spent attempting to solve his own murder with the help of his best friend and betrothed, Nadia Lake, Nate has found the answers he was seeking...and he doesn’t like what he’s discovered.

The original Nate was killed because he knew a secret that could change everything. Thanks to Nadia’s quick thinking, the two of them hold the cards now—or think they do.

Unfortunately, neither of them fully understands just how deep the conspiracy runs.

Reese's Reviews:
Resistance picks up almost immediately where Replica left off. Nate and Nadia think they’ve stopped Nate’s father and the artificial intelligence he created from harming any more people. Sadly nothing is ever that simple. Now Nadia is sending her to a retreat out of embarrassment with no connection to the outside world. When Nate finds out Nadia has been put away and his father tells him he’ll be marrying someone else or else he’ll have his sexuality reprogramed. Now it’s up to him and Dante to help her.

Nate is a complete jerk in this book somewhat. I get why he was upset and it’s not completely out of character since he’s more or less a spoiled brat, but I also felt he grew a lot throughout this story. He gets engaged to a girl named Agnes who I guess is unattractive in a lot of ways. She’s shy and definitely an easy mark for him throughout the book. Nate ends up working with Dante a lot throughout the book and we get to see his boyfriend Kurt again. I definitely love the quips between the three boys in this story since they’re all so jaded and sarcastic.

Nadia is a surprisingly strong character, which is one of the main reasons I ended up liking Replica so much. I wouldn’t usually associate privileged and powerful with strong YA female leads, but Nadia has definitely had a hard go at it. Now she’s stuck in an institution and her life is becoming a downward spiral. Getting news of her broken engagement, her family, and about Nate’s dark secrets aren’t easy for her, but she comes out of this book stronger than ever.

I seriously enjoyed this book a whole lot. I’m nervous about ending this series since I hate endings, but I have a feeling it’ll be epic.

Restistance definitely upped the romance level up a notch. I enjoyed the growing affection between Nadia and Dante. Seriously in my mind Dante is ubber sexy and I’m excited that Nadia will have someone who cares about her.

Oh Agnes. So we’re supposed to not like her because she’s taking Nadia’s place, but I like her a lot. Agnes and Nadia really get along when they meet and I liked how we get to fully understand her character through Nadia’s eyes and from the perspective of a girl who is just doing what needs to be done for her family.

Overall great book, I love the characters, the story, and all the mystery and secrets surrounding this book! Can’t wait for Revolution!

Jenna Black is your typical writer. Which means she's an "experience junkie." She got her BA in physical anthropology and French from Duke University.

Once upon a time, she dreamed she would be the next Jane Goodall, camping in the bush making fabulous discoveries about primate behavior. Then, during her senior year at Duke, she did some actual research in the field and made this shocking discovery: primates spend something like 80% of their time doing such exciting things as sleeping and eating.

Concluding that this discovery was her life's work in the field of primatology, she then moved on to such varied pastimes as grooming dogs and writing technical documentation. She writes paranormal romance for Tor and urban fantasy for Bantam Dell.