Why Hate the Billionaire Cover Reveal 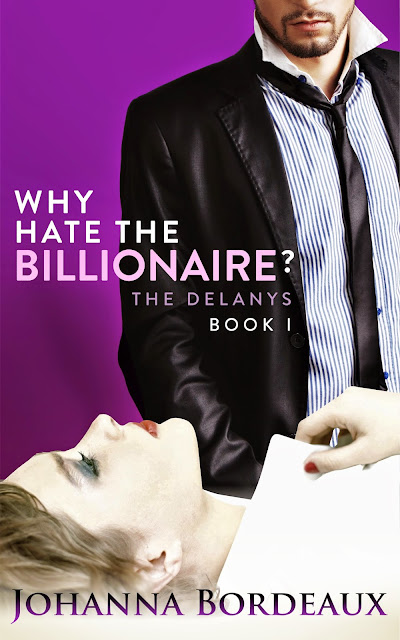 The Latest in New Adult Romance by Johanna Bordeaux


Why Hate the Billionaire? is the first of The Delanys, red-hotromances filled with sensuality, passion, and all the forms of deepest love.  Five closely-bonded siblings -- Cassidy, Brianna, Kellee, Norah, and Niall –– from a lower, middle class family whose parents were killed 11 years ago each must find a way to survive –– and thrive –– from their
encounters with the sexy billionaires who desire them.

Synopsis
Why Hate the Billionaire? (The Delanys Book I)


Cassidy Delany is resigned to a life of responsibility, hard work, and sacrifice as she struggles to support her orphaned family. She never indulges her passions so that her younger siblings can have
the freedom to follow all of theirs. That is, until she encounters Daniel, a sublimely gorgeous –– and arrogant –– billionaire. Overwhelming mutual lust leads her to agree to a one-night stand that morphs into a fantasy weekend full of mind-blowing sex. When he acts like Cassidy is just another woman who exists for his pleasure, she runs away, hoping to never see him again. But when Daniel reappears and turns everything upside down, Cassidy knows that their unquenchable passion and the disturbing emotions it evokes, could destroy everything she’s fought so hard to achieve.


Daniel Sheffield, MD, is a typical spoiled, Beacon Hill Adonis from a Boston Brahmin family with trillions of dollars, and always gets whatever –– and whoever –– he wants. But the delectable and brilliant Cassidy Delany is something he’s never encountered before: a woman who sees something
worth wanting beyond his money, power, and sex appeal. One taste and what he thought was just an insatiable desire for her body becomes a need for much more. But he’s shocked to discover that getting the girl can destroy what he values most –– control.

Excerpt –– Why Hate the Billionaire? (The Delanys Book I)
Cassidy

He didn’t run. I’ve been talking nonsense and it doesn’t seem to bother him. No funny looks either. It doesn’t even seem like he’s being nice just so we can have sex again. After what we shared, though… When he made me feel he beautiful and loved and safe Unfortunately, I know that this sort of thing doesn’t exist in reality.
But the fact is that in reality, we’re too different. Daniel’s from the land of the rich and powerful and, while he says he’ll not have anything to do with the bitch he was with, he’s still going to marry his equal in wealth and status. A woman from the upper crust trained to be the right kind of wife. One who stays home and throws $100,000 parties for every occasion and dedicates her life to making him and their family look good. Not a girl from Southy who’s worked all her life to be able to take care of her younger siblings. Daniel’s not about to be emotionally attached to someone so beneath him in status and wealth once this little moment is over. And I’d never submerge my life to someone else’s; medicine and my siblings mean too much to me.
And it’s too bad, because, besides the sex, I like him. We have science in common and a similar sense of humor. He’s probably being groomed to inherit some sort of medically related multi-international. I watch him eat. It’s fascinating just to seen a piece of egg white slide down his perfectly crafted lips, especially when I know what they feel like all over me. But as I get aroused, the room suddenly grows cold.
“Hey, babe,” Daniel is staring at me. He seems concerned.
“Just a little cold. An effect of the hot food.” I’m lying.
Daniel holds my hand and rubs it. His touch makes me slip back into the fantasy world again. He runs one of his long fingers lightly over my jaw. I make a resolution. So what if this is a blip in time. If I’m making memories, I plan on making a few more so I’ll always remember that once, someone made me feel special. I look into his blue-gray eyes and we’re connected again.
“Your eyes aren’t just hazel, they’re a golden hazel. Little bits of liquid gold in there.” He seems rapt.
Were my eyes that attractive or were wealthy men just naturally attracted to gold? I smile ruefully.
“What?” Daniel asks.
“Nobody’s ever described my eyes as a precious metal. It’s sort of embarrassing.” I’d look away, but I can’t.
“I didn’t mean it to be.” He looks at my plate. “You didn’t finish everything,” he says, astonished.
“I ate a lot,” I protest lightly. “My eggs, sausages, and most of the hash browns. I’m full. You can finish it all.”
“Thanks!” Daniel greedily grabs my plate. Good, it’ll give him lots of energy to burn off if I have my way. I watch him suck down some potatoes and remember the sensation of him sucking on me. I snap my knees closed as I stifle a moan.
The waitress brings the check. No dessert for us; that’s waiting at the hotel. I grab for the check and Daniel tries to snatch it away.
“No,” I say definitely. “It’s mine. You’ve been paying for everything so far. It’s my turn.”
“But Cassie, it’s not a big deal and it’s easier for me…” Daniel protests.
“No,” I say, maybe a little too loudly. He doesn’t understand. If he pays for everything and I just give him sex, it basically means I’m acting like a whore. “I like things equal. Last night was…last night. We either pay for ourselves or switch each time.” I give what I hope is a sultry look. “You know, we change positions regularly…”
“Hmm,” Daniel seems to consider that with a little smile. “Well, I definitely know whose turn it is on top.”
The images pore into my head and I can feel my inner walls clench and my hips wanting to rotate. Of course, now that’s all I can think about and my hunger for Daniel grows. I stand up, throwing enough cash on the table for the meal and a large tip. “Are you ready? Let’s go.”
Daniel’s right behind me as we rush out into the alley. He grabs me to him and pushes me against the wall for a heated kiss. He pushes a leg between mine and I can’t help myself. I wrap a leg on his hip and start grinding. I can feel him thickening under his jeans. Instead of relieving the need, this is making it worse.
“Cassie, baby. If you keep doing that, I’ll be too hard to make it to the hotel. When I count to 3, we’ll break and make a run for the hotel.” Daniel shoves his tongue deeper, exploring my mouth then abruptly stops. “1, 2, 3 – RUN!”
We make it to the lobby, both of us struggling to catch our breath. Daniel keeps poking the “up” button for an elevator, but it’s taking too long and I can’t stand it. Even rubbing my legs together doesn’t give me any relief. “The stairs!” I yell and Daniel chases me to our room

Coming Next Month... and stay tuned for the tour - brought to you by
Worldwind Virtual Book Tours
Posted by Reese's Reviews at 1:00 AM