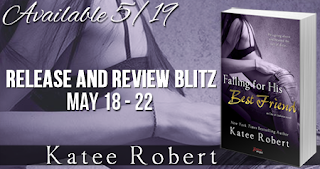 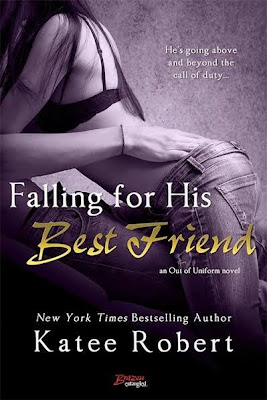 Falling for His Best Friend
by Katee Robert
When Avery Yeung decides to stop waiting around for life to align to get pregnant, her best friend Drew convinces her that he’s the only man for the job. Fans of Nicolette Day’s No Strings Attached or Maisey Yates’s Unexpected, will devour the sexy addition to the Out of Uniform series by NYT and USA Today Bestselling Author Katee Robert.

Title: Falling for His Best Friend
Author: Katee Robert
Series: Out of Uniform #2
Genre: Contemporary Romance
Release Date: May 19, 2015
Publisher: Entangled Brazen
Synopsis:
Avery Yeung’s biological clock just went off early. Thanks to her family’s medical history, she’s running out of time to get knocked up. And the only guy within donating distance? Her overprotective—and irritatingly hot—best friend. So clearly she needs an anonymous donor…
Anonymous donor? Over Sheriff Drew Flannery’s dead body. While daddyhood will never be in the cards for a man with his past, Drew won’t let Avery shop for a “popsicle pop.” He’ll do what’s right for his best friend by doing his best friend. But only if they do it properly.
But there’s nothing “proper” about it. Between the bed, the kitchen counter, and against his squad car, Avery and Drew are having the hottest sex ever. They can’t get enough of it—or each other. And without knowing it, they’ve crossed the one line that could ruin their friendship forever…
See where it all began with book 1 of the Out of Uniform series, In Bed with Mr. Wrong.

Get More information at: Goodreads  | Amazon | Barnes & Noble | Kobo | iTunes
Reese's Review:
I received an ARC of Falling For His Best-Friend for an honest review.

Avery has found out that she has the markings for cancer and when she turns twenty-eight she won’t be able to have children. Now she’s decided that if she wants to have her own baby she needs to take destiny into her own hands. She’s found a donor and plans on having a baby very soon. When her best friend Drew finds out Avery is planning on having a baby with a stranger, Drew decides to be Avery’s baby daddy. When sex becomes so much more Drew and Avery both come clean so they can have their happily ever after.

I liked this book. Avery and Drew were adorable and realistic characters. Drew is afraid he’ll turn into his alcoholic dad if he loses Avery, and Avery is afraid that Drew’s past with women will make their relationship impossible.

I really enjoyed the character growth and the sexy scenes that Katee Roberts always accepts at.

I cannot wait until the next book in this series.

She glanced up when he got out of his car. “We’re going to be late.”
“Late?” He hadn’t been aware he was on a timetable. Some things weren’t meant to be rushed. Drew wiped his palms on his slacks, trying not to fidget when she pinned him with a look.
“Yeah, late. Come on. I’ll drive.” She practically herded him into the passenger seat of the Beast and then climbed into the driver’s side. What the hell was going on? He didn’t get his explanation until ten minutes later when she pulled into the parking lot of a fertility clinic. Drew stared at the tasteful sign above the door. Why the fuck were they here? “My swimmers are fine.”
“What?” She shut off her Jeep.
“My swimmers.” He gestured at his lap, wanting to growl when her eyes went wide. “They’re fine. More than able to get the job done.”
“Uh... I have no doubt of that.” She looked like she wanted to be doing anything else but having this conversation. “This is just one of the necessary steps. It’s not because I think your, ah, swimmers aren’t up to snuff.”
Necessary steps. So she must want him to get some tests done or some shit. Drew took a deep breath. He’d said he was down for this, and that meant doing whatever so- called necessary steps Avery needed. Even though it was not necessary as far as he was concerned. He was thirty, not even past his prime.
Whatever. He’d go through whatever tests she needed. Then they’d go back to her place and get this baby-making business started.

Rafflecopter: Spread the love and enter to win the tour-wide giveaway! 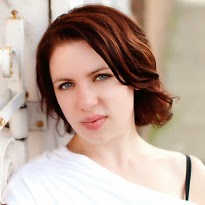 New York Times and USA TODAY bestselling author Katee Robert learned to tell her stories at her grandpa’s knee. She found romance novels at age twelve and it changed her life. When not writing sexy contemporary and speculative fiction romance novels, she spends her time playing imaginary games with her wee ones, driving her husband batty with what-if questions, and planning for the inevitable zombie apocalypse.  Connect with Katee at: Website | Facebook | Twitter | Google + | GoodReads | Instagram | Tumblr | Youtube