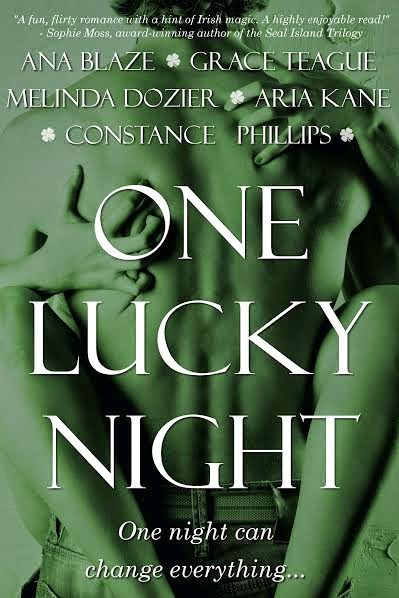 One night can change everything…


The crew at Boston’s Brazen Head Pub hasn’t been very lucky in love. Can a mysterious visitor inspire them to look past old hurts and misconceptions and give romance a chance? One Lucky Night is a collection of five sexy interwoven novelettes by Aria Kane, Grace Teague, Ana Blaze, Constance Phillips, and Melinda Dozier.


Lucky Break by Aria Kane
Four years ago, chef Derek Chase walked out of Andrea Rivera’s life after a tragedy neither of them were prepared to deal with. When she’s called to the Brazen Head to repair a dishwasher, old sparks ignite buried feelings.


Lucky Star by Grace Teague
When her life is threatened by a mugger, Charlotte Price realizes she's in love with her best friend, Tommy Leung. The Brazen Head seems like the perfect neutral place to confess her feelings, but nothing goes according to plan.


A New Tune by Ana Blaze
When it comes to dating, Holly Hall has one unbreakable rule: no musicians. Not even gorgeous ones. Especially not gorgeous ones. Dating them only leads to heartbreak. So why did she let singer-songwriter Cian O’Neill kiss her? And why is she thinking about doing it again?


Lexi’s Chance by Constance Phillips
As a bartender, Sean Whelan meets all kinds of women every night, but none turn his head the way that Lexi has. She’s been playing cat and mouse with him for weeks. Tonight, Sean’s determined to get Lexi to quit teasing and take a real chance on him.


Drink or Dare by Melinda Dozier
A bachelorette party Drink or Dare game pairs paramedic students, Rachel Robertson and Killian Whelan, in a flirting match. Soon, the dares threaten to turn their academic rivalry into something much more.


Check out the book trailer! 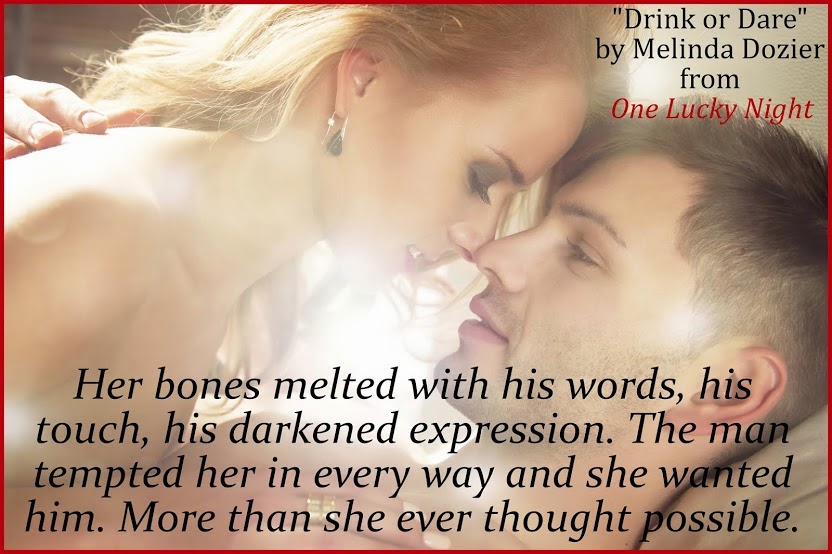 Derek startled when someone knocked hard on the back door of the kitchen, the one that led into the alley. The Brazen Head had been busy, but not unmanageable – a steady stream of orders came through the kitchen. The dishes were starting to pile up in the sink. He glanced up at the clock on the wall. Seven o'clock on the dot. Just what he needed. Some cranky butt-crack-bearing plumber getting in his way and dirtying up his kitchen.

"Andy the handyman," he muttered to himself before pulling the heavy door open.

A biting wind blasted him in the face, but it was the face greeting him that knocked him back a step. It was a face he knew very well, but had never planned on seeing again. Andrea Rivera stood in the glow of the security lights, looking all grown up. She wore jeans, work boots, and a black leather jacket. Her long black hair swept back into a tight ponytail. But damn if she still didn’t look as pretty as she'd ever looked in her sundresses and strappy sandals. Her lips parted in surprise and he found his eyes drawn to their full shape. No, he thought, pretty wasn't the right word anymore. She was pretty when she was a teenager. Now, she was gorgeous and sexy as hell.

"Derek?" she asked, shaking him from his thoughts. Her voice cracked on his name. Must have been the cold February air. She met his eyes for the briefest moment before glancing away. Her eyes were the same honey brown he remembered from that day four years ago.

"What are you doing here?" he asked, his voice harsher than he'd intended. You can't be here, he thought.

Andrea's pink lips turned down and her brow creased. She stared at him like that for a few long seconds, somehow avoiding his eyes the entire time.

"I should ask you the same," she murmured, then sighed. "I'm here to fix a dishwasher."

It was only then he noticed the large red toolbox hanging from her mitten-covered hand. Across the top in permanent marker, she had written "Andy" in scrolling cursive permanent marker.

"Andy’s coming to fix the dishwasher. You're Andrea," he said, as if establishing her true identity would make her disappear. He stared dumbly at the toolbox. This had to be some weird mistake. He found himself wishing for the burly handyman he'd been dreading only seconds before.


She raised an eyebrow at him and waved at the dark alley with her free hand. White flurries whipped in and out of the dim streams of light. "Are you really going to let me freeze out here because I now go by a nickname?"


Aria Kane is a recovering mechanical engineer and romance writer. As a military brat, she grew up all over the country, but now lives in sunny Florida with a 60 lb mutt who thinks he's a chihuahua.


Grace Teague lives in Pittsburgh with her spouse, children and a cat named Mr. Sushi.


Ana Blaze lives near Washington DC with her charming husband and three cats who firmly believe they are royalty. Ana is a member of Romance Writers of America.


Constance Phillips lives in Ohio with her husband, two ready-to-leave-the-nest children, and four canine kids. Her perfect fantasy vacation would involve hunting Dracula across Europe with her daughter, who also digs that kind of stuff.


Melinda Dozier teaches English to middle schoolers by day and writes at night. She lives in Guatemala, Central America with her college sweetheart and three sons.


The authors are giving away two Amazon Giftcards!