Three Chances to WIN during the Release Day Celebration of Solider Mine!
In SOLIDER MINE, book 2 in the Sons of War series by Lizzy Ford, a wounded soldier struggling to put his life back together meets a beautiful woman with a dark past of her own. 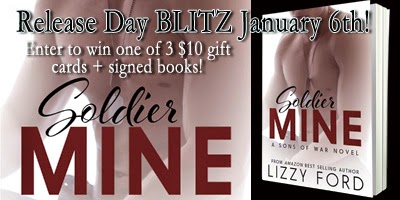 To celebrate SOLDIER MINE, Lizzy is offering THREE giveaways on release day! One day only! On January 6th, winners will be picked at random for a $10 gift card to either Amazon or Barnes & Noble & a signed copy of SOLIDER MINE or SEMPER MINE. Drawings will be held at 1:00pm EST, 4:00pm EST and 8:00pm EST and announced on Lizzy's Facebook page and on Twitter. Winners will need to contact Lizzy with their preferred store for gift card, email address and shipping address, at lizzyford2010 AT gmail DOT com.


Stop by all these great blogs to find out how to enter: 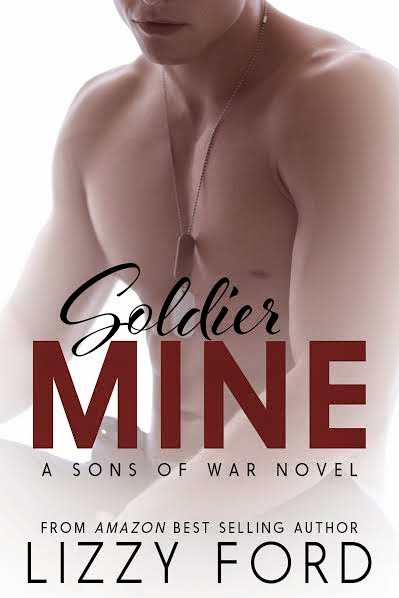 Synopsis:
A standalone novel in the Sons of War contemporary military romance series …

Petr’s life changed overnight when an ambush not only killed his twin, but left him wounded beyond repair as well. Tormented by that night, he struggles to put his life back together and to find purpose in the support role his injury forces him to take. Yet his heart and soul ache to be with his buddies at war, and nothing seems soothe the hole inside him.

Until he meets Claudia, the sister of a troubled boy Petr meets during a recruitment trip to a local school. Claudia’s got her own demon in the form of an abusive ex-boyfriend who won’t stop stalking her. She’s weary of starting over in a new place every month and working to make ends meet to support her younger brother, who she fears has fallen in with the wrong crowd despite her best efforts to help him.

Unable to reconcile his own feelings about what happened to him, Petr’s protective instinct nonetheless makes him want to reach out to her.

Can a man who views himself as broken and a woman unable to trust help each other heal?

About Lizzy Ford:
Lizzy Ford is the author of over thirty books written for young adult and  adult romance readers, to include the internationally bestselling “Rhyn Trilogy,” “Witchling Series” and the “War of Gods” series. Lizzy has focused on keeping her readers happy by producing brilliant, gritty romances that remind people why true love is a trial worth enduring. Lizzy’s books can be found on every major ereader library, to include: Amazon, Barnes and Noble, iBooks, Kobo, Sony and Smashwords. She lives in southern Arizona with her husband, three dogs and a cat.