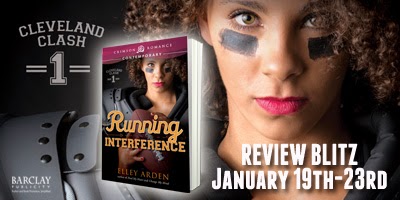 Daily #giveaways and 1 Grand Prize up for grabs during the blitz for RUNNING INTERFERENCE, a Cleveland Clash novel by Elley Arden!
Female professional football player Tanya Martin enlists the help of childhood friend and Super Bowl MVP Cam Simmons to help save her father’s financially strapped boxing gym and in the process loses her carefully guarded heart.

To celebrate the release of her new series, Cleveland Clash, with the first novel, RUNNING INTERFERENCE, Elley is doing daily #giveaways on each day of the review blitz! On Monday, Wednesday and Friday, winners will receive a digital copy of one of Elley’s backlist titles. On Tuesday and Thursday, winners will #win a $10 gift card to Amazon or Barnes & Noble (winner’s choice). Daily drawings will be held at 4:00pm EST and winners will be announced on Elley’s Facebook page and on Twitter.


Winners will need to contact Elley with their preferred store for gift card, email address and shipping address, at elley AT elleyarden DOT com. 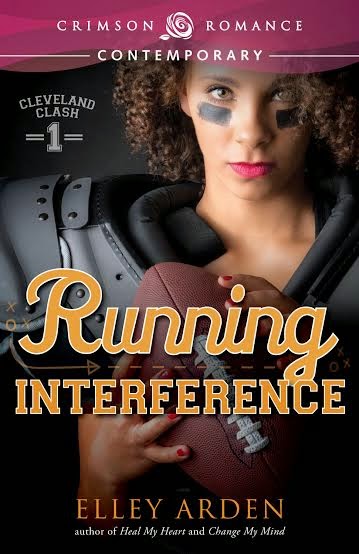 Synopsis:
In an exciting new series from Elley Arden, it’s sports romance with a twist, when an independent, tough-talking female football player joins forces with her high-profile, hotter-than-hell friend to save her father’s boxing gym.


Even when she’s playing offense, defense is the name of the game for Cleveland Clash offensive linewoman Tanya Martin. After watching her family and friends struggle with relationships and the strings they leave behind, she has one unflappable goal: “Protect this house. Protect this heart.” The motto takes on new meaning when her father’s beloved gym is threatened with foreclosure and help appears in the form of her high school friend Cam Simmons, who rolls into town after a Super Bowl win and a five-year absence, looking like the one man who could test her resolve.


More comfortable in the spotlight than in the gritty surroundings of his hometown, Cam Simmons dreads the off-season visit that comes with the ulterior motive of convincing his mother to move. But things change when he reconnects with Tanya. The more time he spends with the sexy, sarcastic woman, who is as determined as ever to stay single, the more he can’t resist the challenge. Until, becoming friends with benefits has her running away, and a bachelor auction to save the gym has him in the sites of a woman who could ruin everything.

Elley Arden is a born and bred Pennsylvanian who has lived as far west as Utah and as far north as Wisconsin. She drinks wine like it’s water (a slight exaggeration), prefers a night at the ballpark to a night on the town, and believes almond English toffee is the key to happiness.Charming characters. Emotional stories. Sexy romance.