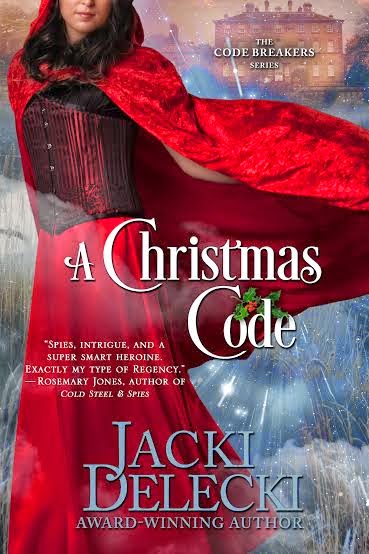 Book Blurb:
Lady Gwyneth Beaumont has long awaited the opportunity to show Viscount James Ashworth that she is no longer the impetuous child who dogged his footsteps. Now a much sought-after debutante, she is determined to prove to the hard-headed rake that she is a grown woman and a worthy participant in both the spy game and the game of love.

Ash, recently returned from three years undercover in France in His Majesty’s service, wants nothing more than to complete his final mission and retire to his bucolic country estate. However, what seemed a simple assignment to protect the Prince Regent at a Christmas party turns into a maze of intrigue, desire, and treachery.

Adding to the perilous secret operation is one problem Ash never anticipated: The appearance of the reckless, enticing Gwyneth, who has blossomed into a gorgeous woman and self-appointed spy. When a snooping Gwyneth uncovers a shocking secret, she puts herself in mortal danger.

Can Ash protect Gwyneth and the Prince from French assailants and, at the same time, win the passionate lady's heart?

Can Ash and Gwyneth both triumph as winners in the game of spies and love?

Reese's Reviews:
A Christmas Code is the story of Lady Gwyneth Beaumont and Viscount James Ashworth. Gwyneth has been in love with he brothers’ best friend Ash since she was a little girl. Ash wants to settle down and marry Gwyneth but only after his final mission to keep the Prince safe at the upcoming Christmas party. Ash will do anything to keep Gwyneth safe but all Gwyneth wants is to help Ash. When the Christmas party arrives the threat to the Prince may not be the only threat to the young couple.

A Christmas Code was a cute holiday novella filled with love and mystery. Ash doesn’t believe Gwyneth can help him but when she saves his life and puts herself in danger for him he begins to see her as an equal. Gwyneth is an amazing strong character who is very perceptive and wasn’t just one of those girls who “thought” she could help but ended up getting in the way.

Jacki’s love affair with the arts began at a young age and inspired her to train as a jazz singer and dancer. She has performed many acting roles with Seattle Opera Company and Pacific Northwest Ballet.

Her travels to London and Paris ignited a deep-seated passion to write the romantic, regency The Code Breaker Series. Jacki is certain she spent at least one lifetime dancing in the Moulin Rouge.

Jacki has set her Grayce Walters Mystery Series in Seattle, her long-time home. The city’s unique and colorful locations are a backdrop for her romantic mystery.

Although writing now fills much of her day, she continues to volunteer for Seattle’s Ballet and Opera Companies and leads children’s tours of Pike Street Market. Her volunteer work with Seattle’s homeless shelters influenced one of her main characters in An Inner Fire and Women Under Fire.

Jacki’s two Golden Labs, Gus and Talley, were her constant companions. Their years of devotion and intuition inspired her to write both dogs as heroes in each series.

A geek at heart, Jacki loves superhero movies--a hero’s battle against insurmountable odds. But her heroines don’t have to wear a unitard to fight injustice and battle for the underdog.

Look for more heart-pounding adventure, intrigue, and romance in A Code of the Heart—A Regency Novella, next in the Code Breaker Series, to be released on Valentine’s Day, 2015.

To learn more about Jacki and her books and to be the first to hear about giveaways join her newsletter found on her website: http:// www.jackidelecki.com. Follow her on FB—Jacki Delecki; Twitter @jackidelecki.

Direct Link:
http://www.rafflecopter.com/rafl/share-code/MjA4ZWI4ZWQ3NTUyM2VlYWJhMzFjOTYxNDNhZTI1Ojk5OQ==/
Posted by Reese's Reviews at 1:00 AM