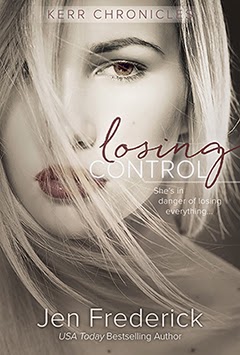 Summary
I’d do anything to keep my mother alive.

Anything, including ask Ian Kerr for help. I don’t know much about him, except that he has more money than some small countries. And he’s willing to spend it on me. Just one catch: there’s a string attached, and not just the one I feel pulling me into his arms and his bed. There’s also the plan for revenge he wants my help with.


Every time he says my name, it makes my body shiver and my heart stutter. I know he’s going to wreck me, know there won’t be anything left of me but lust and sensation by the time he’s done with me, but even though I can see the heartbreak coming towards me like a train, ready to crash into me, I can’t get out of the way. I want what he makes me feel. Want what he’s offering.

This may have started out as something to save my mother, but now…now it’s about what he makes me feel. I’m in danger of losing everything that’s important. Worse? Ian's whispered words and hot caresses are making me believe that's okay.

The question comes from a rich deep voice to my right. Some stupid actor, probably. The notes of his voice are perfectly modulated as if he spent years perfecting the tone and depth to reach the biggest audience.

“Yeah, what’s it to you?” I challenge because I’m not in the mood to be chatted up by some wannabe in an off, off Broadway production who wants to try out some new lines on a messenger girl.

My sneering gaze melts right off my face when it lands on the owner of the voice. Dark haired and dark eyed, the stranger gives me a slow smile as I take him in. He’s tall, much taller than my five foot four inch frame. I have to trek upward to see the entire package.

And there’s so much to appreciate from his trim waist to the wide shoulders encased in a gray wool suit coat that fits him so well I wonder if he was sewn into it. Tiny stitches on the lapel mark it’s expensive provenance. A dark tanned neck gives way to a firm chin and lush lips.
Bee stung is the description that I’ve heard used to describe the same look on super models. Those lips are about the only soft thing on his face. Those lips and a hollow on the side of his face that appears when those plush lips curve upward. The divot is too shallow and wide to be termed a dimple, but it’s just as devastating.

One hand is stuck in a pocket and his jacket is pushed behind the hand to reveal a flat stomach. No desk paunch on this guy. There’s an intense sexual aura about him. The nonchalant stance, the dark gaze, the lush lips are all an invitation to rip the buttons of his snowy white shirt apart and see exactly what lies underneath all of those fabrics.

I stick a thumb under my jaw under the guise of giving my chin a scratch just to make sure my mouth is closed. This guy? He can practice lines with me all he wants.


Reese's Review:
I received an ARC copy of Losing It for an honest review.

Victoria a.k.a. Tiny needs help. Her mothers’ cancer has come back and they need money fast. The problem is Tiny can’t get too many jobs since she has dyslexia. When one of her biking jobs lands her in front of Ian Kerr, a man she never thought she would see again her life has forever changed. Working as a drug mule on the side for her brother in exchange for money has helped a bit but when her bother offers her a job she can’t turn down she runs smack dab in the middle of a billionaire feud with Ian Kerr as the front runner.

Losing It was a cute story with a lot of drama. Ian has a old rival he wants to ruin, but he needs help, which is where Tiny comes in. She gets caught up in helping Ian on the count of her reading disability.

Tiny goes back and forth with not wanting to be involved with Ian due to her disability, she believes she isn’t good enough or that he’ll get sick of her needing constant help.

Ian begins to include himself in Tiny’s life in every way. He takes care of the medical bills for Tiny’s mother. He makes sure they have a car so they don’t need to take the bus to the hospital. He makes sure she has food everyday and new clothes. He pampers her even though she doesn’t like the constant handouts, which is why she agrees to help him.

I enjoyed how realistic the relationship problems were in this book. Tiny has dyslexia, which she doesn’t let bother her or slow her down, but she also feels like she’s inadequate to be with Ian because he can read. It’s definitely an insecurity problem, but I enjoyed how it was realistic on not a body type problem we often see in other novels.

Overall, I thought this was a cute story. I’m excited to read the second one. Tiny and Ian definitely have a great upcoming story and I can’t wait to see how they take his enemy down.

Author Biography Bestselling author Jen Frederick lives with her husband, child, and one rambunctious dog. She's been reading stories all her life but never imagined writing one of her own. Jen loves to hear from readers so drop her a line at jensfrederick@gmail.com.