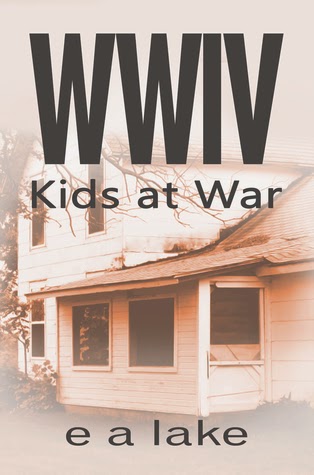 Synopsis
Almost six years since an unknown event plunged the world into darkness, humanity continues to crumble. Times have worsened as the remaining fuel and valuable resources – fresh food and water – are long gone. Chances of recovery have all but disappeared; chances of survival seem grim.

In a plan so backward, so unlikely to have any success, the militia of the Milwaukee area take a young nun, five teens, and a set of five “special packages” into the barren farmland of south-central Wisconsin. There, with little more than themselves for support, they are to live, to grow, and perhaps even prosper. Or maybe the militia has just removed a problem they chose not to deal with.

With the help of new – yet strange – friends, their journey begins. But trouble finds them, even against their greatest hopes and fervent prayers. Worse, the militia has purchased help from a drunken recluse who may prove to be their greatest trouble of all.

The second book of our greatest war, our battle for survival, begins: WWIV – Kids at War.

@TheSeriousReadr and/or the author at @ealake5 for retweets!
Purchase on Amazon


Excerpt:
The five teens, clutching five babies, stood nervously in the far end of the front bedroom. Theresa eyed them cautiously. “We need to keep the babies as quiet as possible for the next little bit,” she said. “Hopefully this danger will pass quickly and we can get on with our day.”
The girls snuck peeks at one another as Theresa went amongst them with words of encouragement. Reaching Sarah, Theresa whispered in her ear. “Is the back door still locked?”
Sarah’s eyes instantly filled with tears as she gave a small shake of her head. “I unlocked it to get some wood for the fire in the dining room. I’m so sorry, Sister.”
Theresa stroked her arm gently. “It’s okay Sara. All will be fine.”
Theresa listened carefully for what seemed to be an hour, but likely was only a minute or two. From the far lower end of the house they heard the back door creak loudly as it opened. Raising a single finger to her lips, she reminded the girls to keep quiet.
“Hello?” boomed a male voice from the first level. “We know you’re all here somewhere. We saw the lot of you yesterday.” Most of the teens’ eyes filled with tears hearing the baritone voice. Theresa remained strong and gave the group a reassuring nod.
“All we want is some food and company. Really,” the same voice sang out once more. Theresa listened carefully for any other conversation, hoping to stay a step ahead of the pair.
The group waited as they heard doors being opened, drawers pulled out, and loud plodding footsteps from the men below. For once, only by God’s grace in Theresa’s mind, all of the babies laid quietly next to their mothers. Theresa’s quaking right hand covered her mouth as she tried to steady her breathing. She prayed fervently the men would not come upstairs.
Only another slow moment passed before she heard the door of the stairway open. Turning to her group, she again pressed the same finger to her lips. Several heads nodded their agreement. Emily sat on one of the beds, face pointed down, clutching and rocking Cal. Theresa softly touched her shoulder hoping to calm the young girl.
“We know you’re up here somewhere. Pretty sure you didn’t all just disappear on us,” the same man called again with a noticeable laugh in his tone. “We just want some food, darlings.” The creaking of the old white painted stairs caused Theresa to flinch. She needed a plan, badly, but none came to mind as she scanned the room for a weapon.
The sound of Karen’s door being torn open caused Sheila, and then Sara, to scream. Theresa glanced back at the frightened pair, both in tears. Flashing a quick stern look, she turned as footsteps came closer. After a brief moment of silence, she drew a sharp breath as the door handle spun.

Throwing the door open, the first man stepped inside grinning. Tall and heavy, he eyed the group with great anticipation. Theresa was about to say something when the second man entered behind the first. This man was tall as well, but thinner than the first man. Much thinner.
After mustering all the courage she could find, Theresa stepped forward to stop the men’s advance. The leader eyed her lewdly. Still in her nightshirt and sweat pants, Theresa crossed her arms to cover her chest. The man’s eye finally came back to hers.
“Well hello there, darling,” he said in an almost sweet tone. “Why’d you make it so hard for me and Johnny to find you all?”
Theresa stared down at the blade in his hand.
Noticing her eyes, he held the knife up for everyone’s inspection. “This is just to make sure no one does anything stupid. Right Johnny?” he said to his partner.
Johnny’s smirk made Theresa wince. His dry lips and dull gray teeth displayed his months and years of life on the road. “That’s right, Randy,” he replied, holding his larger knife up as well.
Theresa took another smaller step forward. “I’m going to have to ask you men to leave,” she said as forcefully as possible. “We have babies here that are being taken care of by my group. There’s no room or time for this. Please, be decent and just leave.”
The nasty pair smirked at her words.
“Really, I am Sister Theresa of the order of …”
The leader raised his hand, cutting off her words. “I don’t care who you are lady. What we want is food,” he demanded. Licking his chapped lips he gazed past Theresa at the younger girls. “And a couple of you to keep us company while we get that food. You…” He pointed at Theresa then at Karen. “…and you. Come downstairs and make us some breakfast. The rest of you stay up here. We have, ah…” He winked at his partner. “…adult things to discuss. It doesn’t pertain to a bunch of little girls. Just these two.” He waggled his knife between Theresa and Karen emphasizing his point.
Theresa slowly raised her folded hands toward the man. “I beg of you, please. This isn’t what you want. We can give you food and then you can be on your way. Please, don’t harm any of my girls.”
The leader leered deep into Theresa’s pleading eyes and drew a long deep breath. “Sister, it appears you need to understand the situation a little better. We want food and some adult entertainment. We have knives, you…well, you see what you’re up against. Don’t make us hurt one of those babies to convince you what you need to do otherwise.”
Tears filling her eyes, Theresa approached dangerously close to the man. “Please sir, please,” she begged. “Just take me then. Leave the others alone. I’ll give you food and whatever else you want. Just don’t harm any of the others.”
The man’s eyes steeled as his face drew tight. “Sister,” he began in a quiet ominous tone. “We make the rules. We have the knives.” The knife’s sharp edge drew near to her face. She tried to speak again but nothing came out. Trying to make a quick decision, her thoughts left her as another voice came from the hallway.
“And I’m the guy with the gun.” A lone man stepped forward with a barrel trained on the pair of road ruffians. “And I think she said she wanted you to leave.” The man’s dead eyes bore into the knife-wielding pair. No emotion crossed his face as he remained fixed on the two. 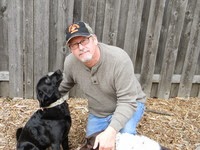 I write dystopian. It's dark, yet fun to play with.

WWIV - In The Beginning is my debut novel.

Trying to get this junk in my head, down on pages. Those pages become chapters. The chapters become a manuscript. The manuscript becomes a novel. Sounds easy enough.

I am an author and my pen name is e a lake. The e and the a mean nothing. So please just call me lake.

Not everything in dystopian writing has to be dark and dreary. I try to create post -apocalyptic situations that will challenge the reader to really believe that the events in my novels could happen.

The best part of my genre? Who needs antagonists when the landscape surrounding my protagonist is so bad. You just have to love this stuff.

I'm not all that scary. Father to three, grandfather to two (three in April 2014). Just a regular guy.

Brought to you by Worldwind Virtual Book Tours
Posted by Reese's Reviews at 12:56 AM