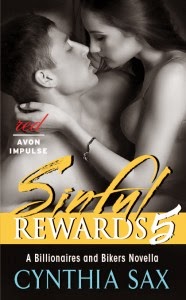 Both men want her with a thrilling intensity. Neither her billionaire nor her biker wishes to share her affections. Is today the day Bee is forced to choose?

Reese's Review:
Bee wished she couldn’t be happier now that her billionaire Nicolas has decided to pay her a visit with twenty free minutes and a hot kiss. Except something is holding her back, her sexy tattooed biker to be exact and now she doesn’t know which man she wants. To make matters worse her favor for Lona may have just ruined any chance she has with ever being with Nicolas. When the power goes out in a big storm she knows whom to call to keep her safe, but she doesn’t know if she wants to give him her heart.

Bee doesn’t want to be her mother. While she’s realizing her mother isn’t who she always thought, she has a hard time letting go of what she thinks is her only option. Hawke and Nicolas are vying for her and despite not wanting to be her mother she wants Hawke.

It’s a constant back and forth between Nicolas and Hawke and while it seems repetitive I love it. Sinful Rewards has so much character growth potential that Ms. Sax plays up in every book. I love Bee’s character as well as both men, although I am crossing my fingers that Bee ends up with Hawke.

Speaking of mystery we still haven’t found out who the mysterious gift giver is and I am hoping this next upcoming installment will reveal all the goodies to me.

Sooo excited about the next book, I know it’ll be great.

Excerpt:
“Do you want twenty minutes of my time?” Nicolas asks. “I’m not a nice person, Bee.” The anguish in his voice makes my heart twist. “You heard what I did.”

I release his hand and slide my palms over his chest, the fabric of his suit luxuriously soft under my fingertips. “Yes, I heard what you did.” I’m not certain of the details, knowing only that Nicolas made a mistake, the consequences were terrible, and he’s been living with guilt since that day. “A truly bad man wouldn’t care about his actions.”

“A good man wouldn’t have made that decision.” Nicolas plucks on his shirt cuffs, clearly agitated. “How can you forgive me?”

He asks this because he can’t forgive himself. I read this truth in his dark eyes. Is this why he hasn’t yet formed a lasting romantic relationship—he doesn’t think himself worthy of love, doesn’t believe a woman can accept his past?

I wish I could tell him I loved him but I don’t, not yet.

“You’re not perfect, Nicolas.” I rise onto my tiptoes and press my lips against his chin. The phone on my right hip hums as Hawke, my possessive former marine, tries to interrupt the embrace. I ignore the call, focusing on my upset billionaire. “I knew that before I met you, before I decided to be your friend.”

“You are a terrible friend,” I admit and a gold sparkle returns to his brown eyes. “But you have potential. I believe, after two or three years of constant training, you could progress from being a terrible friend to being a really bad friend.”

Nicolas’s lips twitch. “How many years will it take me to become a great friend?”

“More years than you have.” I laugh, skipping away from him. “You’d have to be immortal to achieve great-friend status.”

My smile wavers. Hawke used priceless to describe me when he presented his report to Nicolas. I yearn to ask my billionaire what he thinks about me.

“If one lunch can destroy their relationship, Jacques doesn’t deserve her.” The echoing stops and my body hums with excitement. “Anything worth having is worth fighting for.”

My former marine would fight for the woman he loves. I hear this in his voice, know this in my soul. I open the door, tilt my head back, and gaze upward at Hawke. His chest rises and falls. His scent engulfs me. There’s a gleam of intent in his pale blue eyes.

He wants me and I want him. If I allow him inside, we’ll kiss, touch, do things we shouldn’t. Nicolas deserves my loyalty. I should tell Hawke to go away. I should—

Hawke captures my lips with his, the force of his embrace driving me backward. I reach for him, clasp his broad shoulders. He hooks his arms around me, securing me to him, as he kicks the door shut. Our tongues tangle and twist, dancing to the rhythm of our hearts, his stubble teasing my chin, leaving a sensual trail on my skin.

He tastes of black coffee and man. His body radiates heat, a thin layer of moisture covering his big form. Everything about him, even his no-name T-shirt and seen-better-days jeans, appeals to me. I cling to him, losing myself in his kiss.

Hawke ravishes my mouth with fierce, hard strokes, cupping my ass with his massive hands, lifting me off the floor, pressing me into his muscular form. My feet dangle, my lips throb, and my heart pounds, my world narrowing to the two of us. This is how it always is with us, his touch eroding my reason, my control.

I rub against the hard ridge in his jeans, tormenting us both with more sweet sensation. He feels so good, so right. My pussy moistens and my nipples tighten, my arousal spiraling upward.

Hawke groans into my throat and his grip on my ass intensifies, his reaction thrilling me, making me crazed. I tug on his T-shirt, seeking his bare skin, needing to feel, to taste, to explore all of my huge man.

“Not now, love.” Hawke lowers me, sliding my curves against him until my feet touch the hardwood floor. “You have the lunch to prepare for.” He pushes a strand of my brown hair away from my face, his fingers rough yet gentle, his eyes a brilliant blue. “I vowed not to distract you.”

“To hell with your vow.” My bottom lip curls. “You being here distracts me.”

The damn man laughs. “Show me the clothes.”

About the Author:
Cynthia Sax lives in a world where demons aren’t all bad, angels aren’t all good, and magic happens every single day. Although her heroes may not always say, “I love you”, they will do anything for the women they love. They live passionately. They fight fiercely. They love the same women forever.

Cynthia has loved the same wonderful man forever. Her supportive hubby offers himself up to the joys and pains of research, while they travel the world together, meeting fascinating people and finding inspiration in exotic places such as Istanbul, Bali, and Chicago.