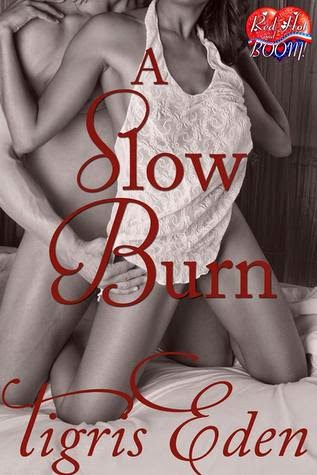 Blurb:
In the Fictional town of Beauville, anything is possible.

Annabelle Macon left home to become somebody. When fired from her job in New York, she’s anxious to come home. Home is where the heart is, and her heart has always been set on Jackson Storme. But when opportunity presents Anna with an exciting new job back in New York, she doesn't know what to do.

Sheriff Jackson Storme is happy being deemed a player. He hasn't found the one woman to call his own, and that’s okay with him. When his baby sister pulls up to the Fourth of July picnic and her passenger steps out, Jackson realizes his woman has made herself known.


Will Anna and Jackson’s fire only burn for one night, or can he convince her that the best burn is A Slow Burn…

Break out the fireworks and get ready to kick off your summer with this HOT new collection of stories. A Slow Burn is part of the Red Hot and BOOM! multi-author series! ( Stands alone for your reading enjoyment)

Reese's Review:
Annabelle was fired from her last job and forced to move back home with her mom. She isn’t expecting to stay home, not giving up on her dream. She doesn’t expect Jackson Storme to be even more gorgeous than before she left, or for him to show an exciting amount of interest in her. What Annabelle thinks will be one night of festivities and passion, but Jackson has other plans.

Jackson Storme is the sheriff of Beauville and the town man-ho. He’s been there and slept with that, sometimes twice. However, all that changes when Annabelle Macon comes back home. Now all he wants his her and he plans to get her on board.

Jackson and Annabelle’s story was cute and quick. I enjoyed the banter, the small town of Beauville we’re introduced to and the secondary characters.

Despite all that though I enjoyed A Slow Burn and am seriously drooling to get another installment of this series. I love Tigris Eden’s books and A Slow Burn is no exception. Her books always contain a diverse set of characters that I fall for every time I open one of her books.