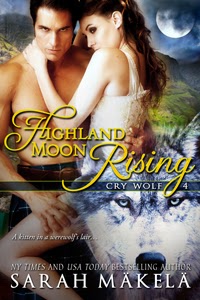 Book Description:
A kitten in a werewolves’ lair…

A Highland reunion...
After months of trying to rescue her werewolf half-brother Colin who was abducted by evil research scientists, wereleopard Caitlyn has come home to Scotland to console her sibling. But her problems are far from over...

Red in tooth and claw...
Still heady and wanton from the power of last night’s full moon, Caitlyn is in mortal danger. Werewolves have little respect for other shifters, and she’s trapped and caged at the Scottish Pack's HQ and at the mercy of Alistair—the vicious wolf who fathered Colin and abused her mother, and who’s capable of murder…

The sweet smell of arousal...
Her scent can save her, or kill her. Dougal, the Pack’s new Alpha, hungers to strip her naked and satiate his fiery lunar lust. But he also senses this beautiful feline with clover-green eyes that shine through the bars of her prison with burning desire is nearing the end of her strength. Will he deny his dominance, and the moon’s lingering power, to be the protector she needs?

Hinges squeaked on a door that hadn’t seen use in several months. Months I’d spent struggling to rescue my younger brother. My attempts had been in vain. Not only had the scientists who’d captured him discovered my existence and fervently chased me, but no matter what I’d tried, their research facility had been nearly impenetrable for a lone wereleopard. The tall fences and heavy-duty searchlights would have been challenge enough, but the plentiful armed guards that crisscrossed the compound had made it impossible to proceed.
Fortunately, the werewolf Pack he’d transferred to had broken him—and the other shifters—free with their numbers and brute strength. However, I could only wonder how Colin had fared after all he’d been through. From the brief phone call we’d shared yesterday, I barely recognized him. He didn’t sound at all like the easygoing guy I’d known. He was weary and solemn.
But that was understandable. Whatever had been done had changed him and his beast.
With each minute, hour, day, I neared the brink of complete exhaustion. Sooner than later, I needed to rest up. The scientists had stayed so close on my tail for so long that I remained vigilant at all times. It was so hard to let my guard down.
While I was in Scotland to support Colin, I craved the comfort of home and the ability to run in my feline form without having to keep constant watch over my shoulder. Och, to feel the lush grass and dried leaves beneath my padded feet and to smell the forest air mixing and lingering with the soft undertones of early morning rain. My beast stretched lazily inside my chest, eager to unsheathe her claws and return to nature. But there was no luxury for that yet.
Colin would be arriving back any day now, and I wanted to clean the place up before his return. His absence had made the house a dusty mess. However, this provided me with a temporary place to stay, since I’d given up my flat and the majority of my belongings shortly after he’d gone missing.
Now that he was safe, I looked forward to rebuilding my life and getting back into a comfortable routine.
Tossing my duffel bag on the floor, I took a deep breath, trying to push aside the stress weighing on me. My brother’s scent still lingered in the air after all this time. However, I wasn’t alone. Another musky smell—of a wild beast—urged me deeper into the apartment, calling to me from just out of reach.
As far as I knew, Colin wasn’t expecting company.
A loose floorboard groaned behind me. I spun around, slinging my fist at the intruder as instinct took over. But the hulking man looming over me easily dodged my punch and landed a hard kick to my outer thigh. I stumbled into the living room’s leather armchair but jerked back to my feet, quickly regaining my balance. My cat-like reflexes suffered from being so bone-weary, but I needed to persevere.
Sucking in a deep breath, I scented my attacker’s lupine odor and my blood chilled. Shite.
Werewolves weren’t exactly fans of other shifters, especially felines. The dog and cat politics between us were as hairy as our domestic counterparts’ at times.
“What are you doing here, kitty?” The man snarled the words, sounding every bit the hungry wolf. Dark brown hair swept across his forehead, and he brushed it back with the swipe of his meaty hand. He stalked closer, invading my personal space. I didn’t dare to move away and show weakness.
Questions raced through my head. Who was he? Should I answer him? Something about him seemed familiar, but I couldn’t put my finger on it. Keep the secret safe.
He slid his blue-eyed gaze down my body, pointedly lingering on my curves. His momentary distraction was exactly what I needed to attack.
I leapt into the air, slamming both feet against his chest to knock him down in a fierce hit. My plan nearly succeeded—even if his massive chest was as solid as a brick wall—but he grabbed my ankle at the last minute, dragging me down with him. I twisted, struggling to land on my feet. Unlike my feline counterpart, I wasn’t that agile. Not with a werewolf holding onto me.
Air burst from my lungs as I smacked the floor with bone-rattling force. I gasped, struggling for each breath after the hard blow. A gentle gust of wind made the open front door creak a little. My gaze rose to the lush green outdoors. If I could just make it there, then I could outrun this wolf. Leopards were quicker, so I’d be safe from him.
Shame forced its way inside my chest. My life had become one giant race. Constantly running from one problem to another. That wasn’t me. The fact this wolf had even managed to gain an advantage over me showed just how desperately I needed to rest. If I were at the top of my game, he would be running from me.

About the Author:
NYT & USA Today bestselling author Sarah Mäkelä loves her fiction dark, magical, and passionate. She is a paranormal romance author, but she’s written all over the romance spectrum with cyberpunk, sci-fi, fantasy, urban fantasy...even a sweet contemporary romance!