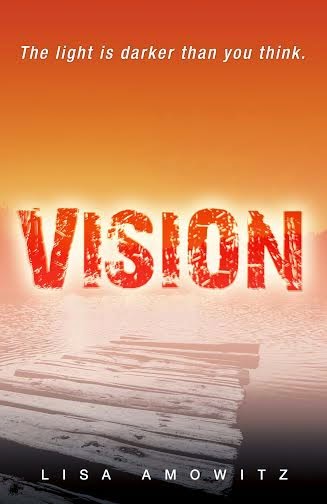 Blurb:
The light is darker than you think…

High school student Bobby Pendell already has his hands full—he works almost every night to support his disabled-vet father and gifted little brother. Then he meets the beautiful new girl in town, who just happens to be his boss’s daughter. Bobby has rules about that kind of thing. Nothing matters more than keeping his job.

When Bobby starts to get blinding migraines that come with scary, violent hallucinations, his livelihood is on the line. Soon, he must face the stunning possibility that the visions of murder are actually real. With his world going dark, Bobby is set on the trail of the serial killer terrorizing his small town. With everyone else convinced he’s the prime suspect, Bobby realizes that he, or the girl he loves, might be killer's next victim.


Reese's Review:
I received an ARC of Visions for an honest review.

Author Lisa Amowitz definitely just took me on the ride of a life time. Never before have I read a story so full of mystery, magic, and beauty before.

Bobby’s life wasn’t perfect. He worked, cooked, cleaned, went to school and took care of his crippled father and younger brother. He had friends and life wasn’t too bad. He knew his life wasn’t going anymore fast and he never expected much out of life. Then everything changed the day he met Gabe. She was everything he could ever want and never have. Working for her father he can’t afford to lose his job. Except life became a whole lot more complicated because Bobby is having visions of people dying and the victims are becoming closer to him. Everything along with these visions is making his life more and more complicated because with each passing vision he begins to lose his sight. Now Bobby must find the killer with no sight before the next victim is Gabe.

Bobby was an amazing character. He cares about the people around him and always does whatever he can to help them. He did have issues with accepting help; viewing it as charity rather than people actually caring about him but I enjoyed his character. He was sweet and so cute when dealing with Gabe. He always tried to take care of her and I loved their encounters after they first met. Bobby was definitely shy and I loved how Gabe teased him often. Another aspect about Bobby I really enjoyed was how he never gave up. He remained strong and while not completely optimistic he never gave up trying to save those he cared about even at the expense of himself.

Visions was definitely an original book. This novel was definitely unique in plot, characters, and the entire story line. Nothing ever seemed to go the way I predicted. The murderer was definitely not who I expected in the least. I wasn’t sure if Gabe and Bobby were going to work out or if the father would approve. Everything was as cloudy as Bobby’s vision became.

Visions left off on a bit of a cliffhanger which honestly fit this fantastic story rather well. I am so happy I got to read this story. I wasn’t sure what to think when I got my copy and I wasn’t sure I would like how it wasn’t written in third person. I usually don’t take to those types of stories written in that sort of fashion. However, I really took to this story. I couldn’t put it down for a minute and honestly read it in one sitting.

Overall, I really enjoyed Visions and would highly recommend it. The mystery kept me guessing. The romance was sweet and helped character development and the story line was unique and unpredictable. Really enjoyed this and am definitely excited to continue reading more of Lisa Amowitz’s crafty writing.

Giveaway Details:
2 Signed copies of Vision and swag for 2 winners US ONLY.
Rafflecopter Code:
a Rafflecopter giveaway

About Lisa:
Lisa Amowitz was born in Queens and raised in the wilds of Long Island, New York where she climbed trees, thought small creatures lived under rocks and studied ant hills. And drew. A lot.

Lisa has been a professor of graphic design at  Bronx Community College where she has been tormenting and cajoling students for nearly eighteen years. She started writing eight years ago because she wanted something to illustrate, but somehow, instead ended up writing YA. Probably because her mind is too dark and twisted for small children.
BREAKING GLASS which was released July 9, 2013 from Spencer Hill Press, is her first published work. VISION, the first of the Finder series will be released in 2014 along with an unnamed sequel in the following year. LIFE AND BETH will also be released in the near future. So stay tuned because Lisa is very hyper and has to create stuff to stay alive.