Elizabethan glamour and intrigue abound in this heart­pounding follow­up to MAID OF SECRETS, which Kirkus Reviews called “lively and fast­paced” with “plenty of action and plot twists.” 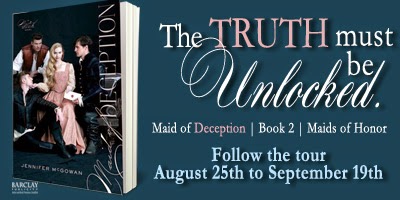 Want to get to know Jennifer better? Check out this exclusive interview! 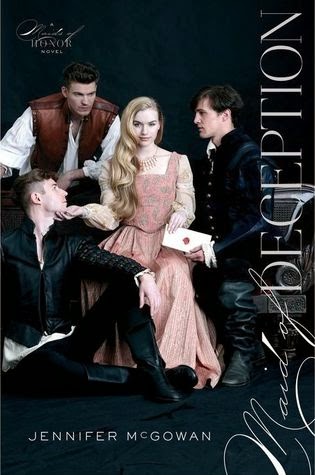 About Maid of Deception:
Love may be the most dangerous weapon of all.

Beatrice Knowles is a Maid of Honor, one of Queen Elizabeth I’s secret protectors. Known for her uncanny ability to manipulate men’s hearts, Beatrice has proven herself to be a valuable asset in the Queen’s court—or so she thinks. It has been three weeks since the Maids thwarted a plot to overthrow the Queen, and Beatrice is preparing to wed her betrothed, Lord Cavanaugh. However, her plans come to a crashing halt as rumors of a brewing Scottish rebellion spread among the court.

Beatrice’s new assignment is to infiltrate the visiting Scottish delegation using her subtle arts in persuasion. The mission seems simple enough, until the Queen pairs Beatrice with the worst of the lot—Alasdair MacLeod. Beatrice cannot help but think that the Queen is purposefully setting her up for failure. But Alasdair could be the key to unlocking the truth about the rebellion...and her heart. Caught in a web of ever­more­twisting lies, Beatrice must rise up among the Maids of Honor and prove what she’s known all along: in a court filled with deception and danger, love may be the deadliest weapon of all.

Also in the Maids of Honor series: MAID OF SECRETS by Jennifer McGowan!


Reese's Review:
I received a copy of Maid of Deception for an honest review.

I was definitely nervous starting this series since I hadn't read the first book but from what others have said this book could be read as a stand alone. That being said I definitely agree with that. I enjoyed Maid of Deception from start to finish. There was no part where I was left feeling confused and I definitely know I am going to reread this story as soon as I read the first one.

I have to say this book started off a little iffy for me. I wasn't completely in love with Beatrice's character and the way she was so back and forth with her emotions. She grew on my throughout the story forever and I enjoyed her honesty and strength.

Alasdair was amazing and honestly such a perfect mach for Beatrice. I enjoyed his character from the first encounter with his character. He was a very special guy who definitely put himself out there even when he could have been hurt and he was definitely someone who Beatrice could rely on which had me loving their relationship all the more.

Maid of Deception was a fast paced story that kept me interested the whole way through. There was a lot going on and it definitely kept me glued to the pages the whole way through. I'm really excited to read the next book but sadly I know that won't be for a while. That being said I know Jennifer McGowan's books are totally worth the wait! 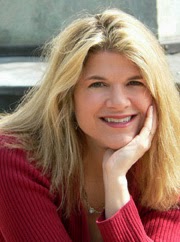 About Jennifer McGowan:
Jennifer McGowan was born in Ohio, grew up in Montana, and studied in Paris. She fell in love with the Elizabethan era as a college student and is now an unrepentant scholar of that period, happily splitting her time between the past and present. An RWA Golden Heart Award winner and multiple finalist, Jenn is the author of the Maids of Honor series, which currently includes Maid of Secrets (2013), the novella A Thief Before Christmas, and the forthcoming novel Maid of Deception (2014). She lives and writes in Ohio, and you can connect with her online at JenniferMcGowan.com, find her on twitter via @Jenn_McGowan, or visit her Facebook page at https://www.facebook.com/AuthorJenniferMcGowan.