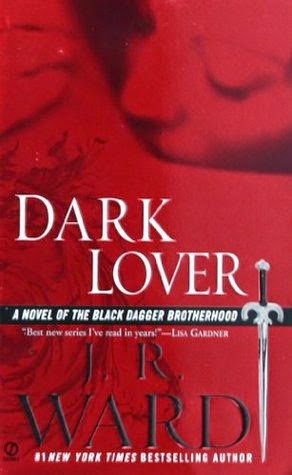 Blurb:
In the shadows of the night in Caldwell, New York, there's a deadly turf war going on between vampires and their slayers. There exists a secret band of brothers like no other-six vampire warriors, defenders of their race. Yet none of them relishes killing more than Wrath, the leader of The Black Dagger Brotherhood.

The only purebred vampire left on earth, Wrath has a score to settle with the slayers who murdered his parents centuries ago. But, when one of his most trusted fighters is killed-leaving his half-breed daughter unaware of his existence or her fate-Wrath must usher her into the world of the undead-a world of sensuality beyond her wildest dreams.

Thoughts:
One of the Brotherhood’s members was just killed. Before he died though, Darius asked his King and brother for help. He has a daughter, a daughter who grew up alone without a family. Darius knew there was a chance she might go through the transition and so he asked Wrath the strongest of all of them to see her through it. Before he died Wrath said no, but now that he’s dead he can’t leave his brothers dying wish open-ended. When Wrath meets Darius’s daughter Beth he wants her more than anything he’s ever wanted. He knows she’s going to change and he knows he needs to help her. Despite all that though he wants her as his as well, he wants her by his side forever.

Beth lives a normal life. She’s a journalist at a small time newspaper she has a cat, and has some close friends on the force. When she meets Wrath she knows something is different. She craves his body like she’s craved nobody else’s and after meeting they spend the night together. Beth has never had a one night stand but she knows Wrath is different. She wants him. When he tells her he knows her father and then gets arrested she leaves with him to avoid danger.

Beth never expected to be told that she would be becoming a vampire. She never expected to ever have a family, and she never expected to be kidnapped by lessers so they could kill Wrath. The lesser will stop at nothing to kill every single vampire there is. Wrath doesn’t know how to be someone’s mate. Wrath is blind and while he is a fighter he is also the ruler of his people. He doesn’t want his title at all.

There are so many characters in this book I can’t wait to meet. I loved each and every character differently except for the lesser who is as evil as they come. The action scenes in this book were amazing. Tragedy, guns, explosives and more all play a role in this story and it was awesome.

I loved Beth and Wrath’s characters the best. Beth is strong and caring and while Wrath is strong and controlling sometimes Beth doesn’t put up with his crap. I love when they butt heads and Beth wins or lets Wrath thinks he won. It’s honestly great. While sometimes she’s scared of him, when everything is revealed she takes things as they come and I loved her character for that. Beth was definitely an awesome character who cares about everyone in her life and is extremely polite to everyone she cares about.

Wrath is a bit different. He’s blind but doesn’t want anyone to know. He doesn’t want to be anyone’s King especially after hiding when his parents were killed and he didn’t try to help them. He lives to kill and doesn’t know how to care for anyone.  All he knows is how to destroy lesser. Beth really changes him and it’s funny to read while he struggles with learning how to deal with his head-strong woman and jealousy. He’s honestly a funny character and ubber alpha male.

Other characters that give their pov are Butch a cop who cares about Beth and becomes swept up in the lives of the brotherhood. He can never go back and after meeting a special someone he definitely isn’t signing up to do so any time soon.

I freaking loved this story and I totally need to get my hands on the rest of the novels. Super excited and I honestly can’t wait to read the next couple books. Wrath’s and Beth’s story is hopefully not over and I can’t wait to see which other characters I get to read about in the upcoming novels. So much awesome!

Teasers:
"An alley. They were taking her into an alley.
Her stomach heaved, bile stinging in her throat, and she jerked her body around furiously, trying to get free. Panic made her strong. But he was stronger.
He pushed her behind a dumpster and pressed his body into hers."

Swoon:
"He dropped a soft kiss to the healing bruise and then drew his tongue down her neck. This time when she thrust her breast out , he slid his hand under her thin shirt and onto her smooth, warm skin."

Jessica Rowley Pell Bird was born on 1969 in Massachusetts, USA. She is the daughter of Maxine F. and W. Gillette Bird, Jr. She began writing as a child, penning her thoughts in diaries as well as inventing short stories. She read her first Harlequin Presents novel in a rose garden when she was in her teens. She was hooked immediately. By the time she went to college, she had boxes and boxes of Harlequins and Silhouettes. Every year, her mother would ask why all those books had to live in the house and Jess would reply that if even one of them disappeared she would know. (She'd catalogued them.)

Jess finished her first romance manuscript the summer before her freshman year of college. She attended Smith College and graduated with a double major in history and art history. She then received a law degree from Albany Law School. Shortly after that, she began working in the healthcare industry in Boston. She spent many years as one of the premier medical center’s Chief of Staff. While working as a lawyer in Boston, she completed two novels more and started a number of partials. In 2001, Bird married John Neville Blakemore III. Both her mother and her new husband kept telling her to send something in to an agent, a publisher, the Tooth Fairy, anyone. She thought they were nuts, but eventually got her nerve up and bought a lot of stamps. Since getting published, she has written contemporary romances as Jessica Bird and paranormal romances as J. R. Ward. She has been a Rita Award finalist, received two Romantic Times Reviewer's Choice nominations and has been a HOLT medallion finalist.

New England born and bred, Jess is surprised to find herself living south of the Mason Dixon line. (But that's what happens when you marry a Southern gentleman.) She and her husband live with their golden retriever, who oversees her writing in a supervisory role.

Have any of you ever read any of the Brotherhood books? What did you think?
Posted by Reese's Reviews at 1:00 AM