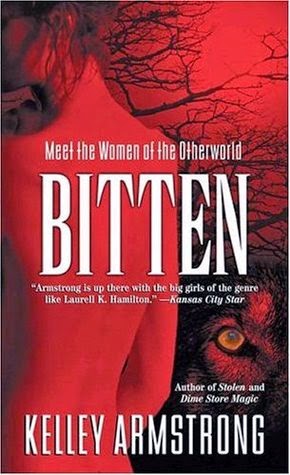 Blurb:
Elena Michaels is the world’s only female werewolf. And she’s tired of it. Tired of a life spent hiding and protecting, a life where her most important job is hunting down rogue werewolves. Tired of a world that not only accepts the worst in her–her temper, her violence–but requires it. Worst of all, she realizes she’s growing content with that life, with being that person.

So she left the Pack and returned to Toronto where she’s trying to live as a human. When the Pack leader calls asking for her help fighting a sudden uprising, she only agrees because she owes him. Once this is over, she’ll be squared with the Pack and free to live life as a human. Which is what she wants. Really.

Thoughts:
Elena Michael’s is trying to move on with her life. She’s trying to be human, but being human isn’t as easy as it once was. Especially since she’s hiding the fact that she’s a werewolf and every week the Change takes over and she needs to turn and run. She tries to be normal around everyone at her work, and at home with her boyfriend and his close nit family. Nothing ever seems to go as planned though because soon she’s getting a call from home, from her pack and she has to go. Now members of her pack are being attacked and killed along with other members of the town, and her family is the suspects, mainly her ex-fiancé Clay who hasn’t let her go. Now Elena must decide who she really is and who she wants to be; a werewolf with a pack or human.

I wasn’t sure what to expect from Bitten. I have read all of Kelley Armstrong’s Young Adult books and I loved those so I had to try Bitten her adult novel. I thought there would be a little more heat but it wasn’t anything special. Clay and Elena’s chemistry is off the charts. They constantly butt heads and I could tell that despite what Elena said or thought she loved Clay.

Elena wants a normal life but she loves her pack which is the only family she’s ever had. Elena is more or less stuck and being constantly pulled back and forth between human and pack and the life she wants and the life she thinks she wants. She does cheat on her boyfriend with Clay which is really not cool but then afterwards she gets super mad at herself and at Clay. She doesn’t want to want Clay and Clay is one of the only reasons she and the pack are at such ends with each other. So it was a constant back and forth which I enjoyed at times but then at other times I wish she would just make up her mind.

Overall Bitten was enjoyable and I think I would read the other books but I’m in no rush. There was some nice action scenes and mystery that I enjoyed and the characters were all fun. Elena’s strong willed and fierce loyalty to those she cares about was definitely the best aspect about this book and I really enjoyed reading it.

Teaser:
"No wonder I was anxious to get back to Toronto. Spend too much time around these guys and you become a little too nonchalant about blood-soaked clothes and bodies in the trunk."

Favorite Quote:
“What's this?" Nick said. "Bedtime?"
No one answered him. I kept my eyes closed.
You look positively content, Clayton," Nick continued, thumping down on the floor. "That wouldn't have anything to do with the fact that Elena is cuddled up with you, is it?"
"It's cold in here," I murmured.
"Doesn't feel cold."
"It's cold," Clay growled.
"I could start a fire."
"I could start one too," Clay said. "With your clothes. Before you get them off.”

Kelley Armstrong has been telling stories since before she could write. Her earliest written efforts were disastrous. If asked for a story about girls and dolls, hers would invariably feature undead girls and evil dolls, much to her teachers' dismay. All efforts to make her produce "normal" stories failed.

Today, she continues to spin tales of ghosts and demons and werewolves, while safely locked away in her basement writing dungeon. She's the author of the NYT-bestselling "Women of the Otherworld" paranormal suspense series and "Darkest Powers" young adult urban fantasy trilogy, as well as the Nadia Stafford crime series. Armstrong lives in southwestern Ontario with her husband, kids and far too many pets.

Thoughts on the Women of the Otherworld Series?
Posted by Reese's Reviews at 1:00 AM