Synopsis
I wasn't planning on falling for Ethan Jamison, hell I wasn't planning on our paths ever crossing. He’s the most popular guy at school and a complete player. Me; I’m the perpetual good girl, trying to carry out one last request. But when you make a promise, how far do you go to see it through?


It’s a running joke that I’m a terrible liar, if only people knew the truth. My whole life has been spent making excuses and deflecting questions. I was pretty good at it until Blair Thomas entered my world. She saw through the mask that everyone is so willing to accept. She makes me want to tell her all my secrets, but can she promise to keep them? 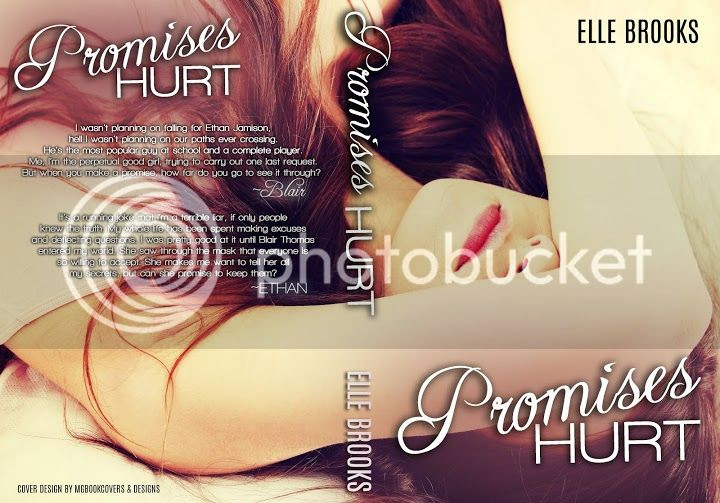 Excerpt
I look down at my cell and it’s 4:54pm. No sign of Ethan. No text to explain. What a douche. I mean, okay so I needed to be here anyway to collect books, but that’s not the point. He didn't know that. I can’t stand people that make plans and then break them without warning. It takes two seconds to send a text.
I’m packing up my things when Ethan Jamison barges through the library doors. He’s panting like he’s out of breath and his eyes are frantically scanning the almost empty room. Then they land on me. I stand completely frozen, mouth gaping like a total moron. Of freakingcourse it has to be that Ethan. He makes his way over, and the sound of his boots echoing through the otherwise silent room awakens me from my dumbstruck state. Emily’s letter flashes in my mind and I feel instantly embarrassed. Like, somehow he knows about it, which of course, he can’t, but I’m still panicking.
He stops a few feet short of my table and looks a little unsure. This isn't the cocky Ethan Jamison that struts around school thinking he’s god’s gift. It’s thrown me a little.
“Hey, um…I’m Ethan,” he says, looking down at me. He lays his guitar case down at his feet and then adjusts his backpack on his shoulders. “Are you the tutor, I mean, sorry…are you Blair?”
I never realized how tall he actually is up close and personal. I’ve seen him play at a gig for about two seconds once, but he was on a stage, so of course he’s gonna look taller than everyone else. Emily and I have only stalked him at a distance. His blue eyes are boring into mine and I'm just standing there. Staring. Like an idiot. He shifts his weight and I realize he’s asked me a question. I still haven't replied. Shit.
“Er…yeah, I’m Blair, nice to meet you. I was just about to go, I thought you weren't coming. You’re late.” The last part comes out all pissy like I'm mad at him.
An amused grin starts to form; his mouth pulling up slightly at one side and the boy has dimples—real life honest-to-god dimples.
I shake my head and practically bark out, “I’ve been waiting for you for almost a half hour. If you’re gonna be late when we meet, you could at least give me a heads up?” Oh my god, why the hell am I telling him off?
His smile widens and he’s not even trying to look sorry. He drops his backpack on the table and takes a seat.
“Yeah, I had practice and it ran over. Steve has a no phone rule, so it’s kinda hard to let you know when I don't have my cell.”
Steve is the music professor; he’s got the new age hippy vibe going on and makes all his students call him by his first name. I pull my chair back out and take a seat. “Okay. Well, um, let’s just get started then.”
I look up and his eyes are zeroed in on my chest. What a complete douche, he’s already ogling my boobs. I cough twice and raise my eyebrows in a ‘what the hell, my eyes are up here’ stare, and his cheeks immediately redden.
“Shit, no, I wasn't checking you out! I mean…um, I wasn't staring at your…fuck, well I kinda was but I mean, shit; I was just trying to read what your shirt says.”

Holy crap, this guy’s more awkward than I am. 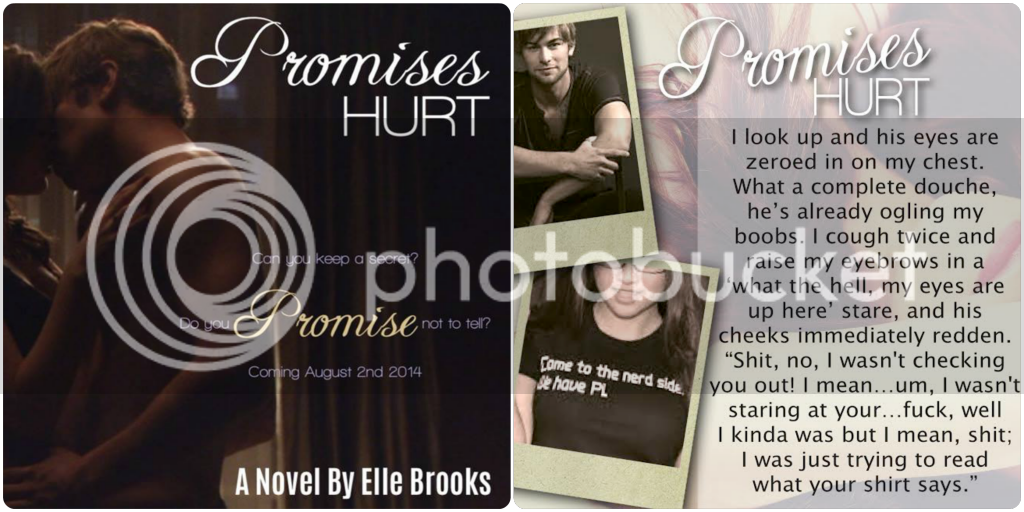 I received an ARC of Promises Hurt for an honest review.

I wasn’t sure what to expect when I started reading Promises Hurt. From the title it seemed the story was going to be a tragedy but that is definitely not what I got; at least for the most part. Instead I got a cute love story and I have to say while the whole “insta-love” was kind of lame I really enjoyed Promises Hurt.

Blair just lost her best friend Em to cancer. Now she has to return to know sans a best friend and a bucket list to finish as her best friends dying wish. Blair never expects to finish all of them, especially not the one that say to “lose her V card to Ethan” but life is taking an unexpected turn. Now Blair is tutoring Ethan and he’s nothing like she expected.

Ethan’s home life is complicated. His father beats him, and his mother lets him. He goes to school with bruises but he keeps it all hidden under a cocky self-assured persona. That is until he meets Blair who to him is as real as it gets. Ethan likes Blair right off the bat and their connection is instant.

Blair was a cute character. I loved all the flashbacks there were between Em and her. They really made this book for me in that it made Blair and Em’s friendship play a more prominent role in this story. Em and Blair’s flashbacks really bring to life who Blair is and why her relationship and the bucket list is so important. Blair is instantly smitten with Ethan from their first tutoring session. While like I said I wasn’t a huge fan of the insta-love I did think their relationship was amazingly authentic.

Ethan while he seems a bit like he would be douche-y he totally isn’t. Yeah he’s popular and extremely talented but his home life really makes him have a more sensitive side. He doesn’t share his home life with anyone except after he meets Blair. He confides in her and falls for her hard and fast. He’s waiting for the day he can get away from his dad and he hopes his mom will leave when he does. His friends a super funny and I just loved his interaction with them.

Ethan’s and Blair’s relationship while it started out rocky for me I really loved it. While there was the whole sexual tension thing Ethan and Blair actually go on real dates and hang out with friends and it’s a cute real relationship that I sometimes miss. Ethan even helps out Blair with finishing Em’s bucket list in more ways than one which (spoiler alert) leads to some issues later. They fight, and get jealous, and tease each other and I honestly loved everything about their relationship.

That ending was just….wow. I am honestly dying to know what happens. The last page left me with such a heart and gut wrenching, I almost cried. I kept trying to go to the next page positive there had been an error because there was no way it could have left off like that. No freaking way. Alas it did end that way and now I am left waiting for the next book.

With all that I conclude that I really fell in love with Promise Hurts. I didn’t think I would but from the first couple pages I couldn’t put it down for a moment. I honestly read this book in one sitting. I seriously enjoyed this first book and I can’t wait for the next. Elle Brooks is definitely on my list as an author I must read all her books.

Teaser:
“When he loses it and ends up in a blind rage, I shut down. I’ve prayed so many f**king times that this will be it, that this will be the time he takes it too far. Throws one punch too many, kicks that little bit too hard, and just finishes me. At least then it would be over.”

Favorite Quote:
“Are you staring at my chest, Jamison?” I ask in mock disgust.
“I’m aloud to ogle your beasts now, you’re mine,” he says, winking and pulling me into his side. Kissing my temple.

Swoon:
“A throaty groan escapes my chest and he lets his teeth nip my lower lip before sucking it and then plunges his tongue back in my mouth.” 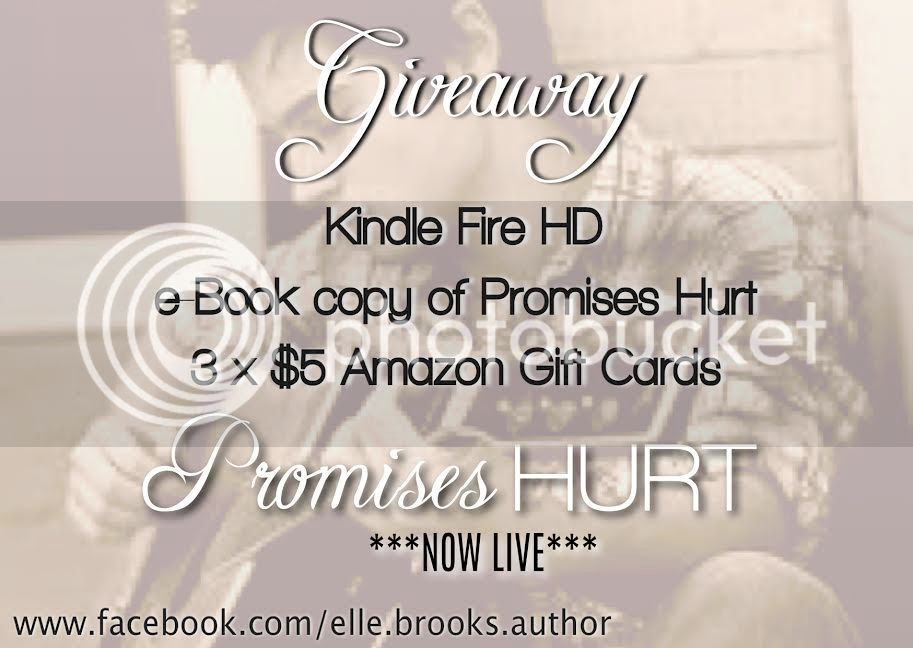