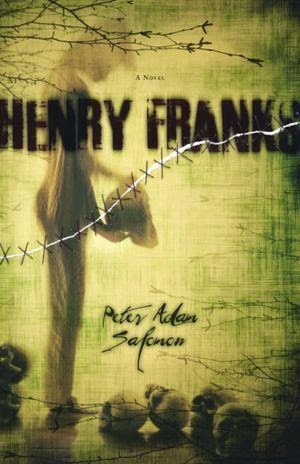 Blurb:
A dark, psychological thriller about a boy's search for himself

Four thousand, three hundred and seventeen stitches, his father had told him once. All the King's horses and all the King's men had put Henry Franks back together again.

One year ago, a terrible accident robbed Henry Franks of his mother and his memories. The past sixteen years have vanished. All he has now are scars and a distant father—the only one who can tell Henry who he is.

If he could trust his father.

While a serial killer stalks their small Georgia town, Henry unearths the bitter truth behind his mother’s death—and the terrifying secrets of his own dark past.

Sometimes, the only thing worse than forgetting is remembering.

My Review:
This book has been on my tbr shelf since I won it in 2012. Yeah I know it’s amazing how a book can sit on a shelf for so long. Honestly though Henry Franks held absolutely no appeal to me at all. I really wanted to get this book of my to-read shelf and into my read pile so I finally buckled down and read it.

To say this book was confusing would be sugar coating it. Throughout 80% of this book I had next to no idea what was going on. This isn’t a long book but still I mean that’s a long time.

The main characters name is Henry Franks and he has scars covering his entire body and he has no memory of who or what he is. He doesn’t feel pain and he has memories of a different life with a different name. Henry sees a psychologist to talk about himself and his dad gives him medicine that makes him have nose bleeds. His father leaves food outside the door and people are dying. To top it all off Henry finally has a friend and a crush on the girl across the street, and she likes him too.

That is sort of what goes on throughout the book. It’s confusing but basically Henry is like Frankenstein’s monster but he has no memory. The ending is freaky freaky freaky but this book leaves you with the feeling of being underwhelmed.

This book really did nothing for me. I didn’t care for the characters and it was all just very messed up. So if you like messed up creepy books that may or may not give you nightmares this is the book for you.

Peter Adam Salomon graduated Emory University in Atlanta, GA with a BA in Theater and Film Studies in 1989.

He is a member of the Society of Children’s Book Writers and Illustrators, the Horror Writers Association, the International Thriller Writers, and The Authors Guild and is represented by the Erin Murphy Literary Agency. His debut novel, HENRY FRANKS, was published by Flux in September 2012. His next novel, ALL THOSE BROKEN ANGELS, a ghost story set in Savannah, GA, is scheduled for publication in Fall 2014 by Flux.

His short fiction has appeared in Demonic Visions I , II, and III and he was the featured author for Gothic Blue Book III: The Graveyard Edition. His poem ‘Electricity and Language and Me’ appeared on BBC Radio 6 performed by The Radiophonic Workshop in December 2013.