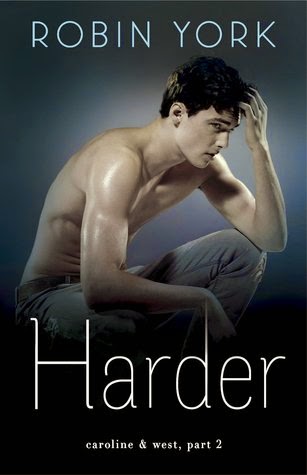 Blurb:
In Robin York’s provocative new novel, two young ex-lovers find themselves together again in the shadow of tragedy—and an intense, undeniable attraction.

Caroline still dreams about West. His warm skin, his taut muscles, his hand sliding down her stomach. Then she wakes up and she’s back to reality: West is gone. And before he left, he broke her heart.

Then, out of the blue, West calls in crisis. A tragedy has hit his family—a family that’s already a fractured mess. Caroline knows what she has to do. Without discussion, without stopping to think, she’s on a plane, flying to his side to support him in any way he needs.

They fought the odds once. Losing each other was hard. But finding their way back to each other couldn’t be harder.

My Review:
West broke up with Caroline after he left to save his family. Caroline has been trying to move on but without West it’s like there is no air. Then he calls, after weeks and months with no contact he calls and Caroline starts running. Being in Wests’ home town isn’t easy. His family is cruel and manipulative. They take and take from West and never give him anything. All West wants is his sister safe, but how can he keep her safe in their world? When Caroline comes West doesn’t want her there, he thinks the town and the people will taint her. So he does something so terrible she leaves. Caroline doesn’t think she’ll ever see West again until he tells her he’s back in town going back to school with his sister. He doesn’t want anything to do with his friends or Caroline but Carline isn’t taking no for an answer she never has and she won’t start now.

Holy smokes I swear I love West and Caroline’s story. Caroline is the epitome of awesome. She’s strong willed and dreams big. She is one of the best female characters ever. Even after everything West has done and honestly it was terrible she makes sure he’s ok and living a happy life. She’s been hurt and beaten down and she never gives up. If you’ve read the first book you know that she dealt with a lot after her pictures were posted on the internet. Harder has her dealing with the court trial and everything that comes with it. She hates the trail and it really puts a rift between Caroline and her father. Still she stays strong and I loved that about her.

West wanted for himself and that turned to crap. He got arrested, he let his family down, he had to leave school and he left Caroline. When he went home he thought he could save them, but he’s drowning himself. When Caroline comes he can’t stand her there because he thinks it’ll ruin her so her pushes her away. He thinks it’ll make her hate him but it’s worse because she proves even more that she understands him. When he finally realizes what he has to do, he goes back to school but decides he can’t go to school and be happy. West has a really hard time with letting people in and not being a jerk. After Caroline buts her way in though West begins to become the guy we fell in love with in Deeper. He starts getting into art and I honestly loved him a whole lot if not more in this book.

While Deeper dealt a lot with Caroline’s issues and things Harder deals with West and how he’s coping with everything. I have to say I enjoyed and loved seeing a more vulnerable side to West and a more feisty side to Caroline. Even as they changed throughout both books they were still so perfect for each other. Now you may be asking what about the sexy good times. There are still sexy good times, lots of hot sexy sweaty good times. I loved Harder so much and am so happy I took a chance on the first book.

Harder is not a sweet book, it’s not a true love story, and it’s not for the faint hearted I don’t think. Harder is definitely one of those books where after you put it down it will have your mind thinking but will leave you in a book coma from the depth and the awesomeness that is Caroline and West’s story. Robin York is a writing genius. I love these stories and I can’t wait to see what she writes next.

Teaser:
“Because I love you. I don't want to, okay? I think there are some things that are so hard, you shouldn't have to do them, only no one can take them from you. There are feelings so sick, so obviously unhealthy, you shouldn't have to feel them. But there they are. I still love you, and I'm not ever going to see you again, not ever. You did that to us. Not your dad or your family. just you."

Swoon:
"When she steps toward me, I grab her at the waist and pull her in. I get her right up against me, get my hand in all that hair, and I kiss her as if I'd never stopped. As if we can start right up again, right now, and pretend everything in the middle never happened. She tastes like she always did. How and eager, wet and sinuous. Amazing."

Robin York grew up at a college, went to college, signed on for some more college, and then married a university professor. She still isn’t sure why it didn’t occur to her to write New Adult sooner. Writing as Ruthie Knox, she is a USA TODAY bestselling author of contemporary romance, including RITA-finalists About Last Night and Room at the Inn. She moonlights as a mother, makes killer salted caramels, and sorts out thorny plot problems while running, hiking, or riding her bike.
Check out Robin York here: Website| Blog| Twitter| Facebook| Goodreads