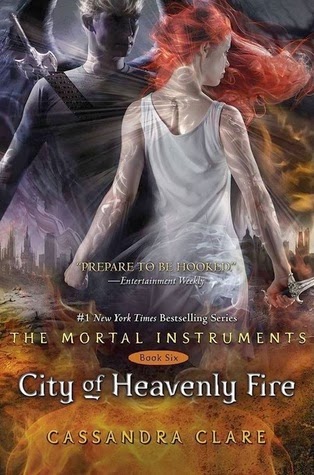 Blurb:
In this dazzling and long-awaited conclusion to the acclaimed Mortal Instruments series, Clary and her friends fight the greatest evil they have ever faced: Clary's own brother.

Sebastian Morgenstern is on the move, systematically turning Shadowhunter against Shadowhunter. Bearing the Infernal Cup, he transforms Shadowhunters into creatures out of nightmare, tearing apart families and lovers as the ranks of his Endarkened army swell.


The embattled Shadowhunters withdraw to Idris - but not even the famed demon towers of Alicante can keep Sebastian at bay. And with the Nephilim trapped in Idris, who will guard the world against demons?


When one of the greatest betrayals the Nephilim have ever known is revealed, Clary, Jace, Isabelle, Simon, and Alec must flee - even if their journey takes them deep into the demon realms, where no Shadowhunter has set foot before, and from which no human being has ever returned...

Love will be sacrificed and lives lost in the terrible battle for the fate of the word in the thrilling final installment of the classic urban fantasy series The Mortal Instruments!

My Review:
Holy crap it’s over. Like legitimately over. I could cry right now because it’s over. The end of this series I swear I was wishing for this book since I started the series, wondering how it would end and now it’s over. It’s one of those things where you’re wishing to know what happens but you really don’t want to know. Yeah that is definitely how it feel right now to know that a book that a friend loaned me on a whim my freshman year of high school, that I grew to love is now over.

The amazing characters we fell in love with are finally back in the conclusion of the Mortal Instruments series and they need to stop Sebastian from destroying the world. To do that they have to go to Hell to save everyone that was taken and destroy him. They lose some people and we meet a new cast of characters but all in all everything comes down to a battle against good and evil.

Clary, Jace, Simon, Isabell, and Alec are on a mission to save the ones they love and destroy the one who took everything from them. The trip to Hell is life changing for all of them. Dreams of what they want the most plague them and love is lost.

This story was freaking fantastic!!! I had never laughed so hard in my life. I swear to goodness I cried because I was laughing so hard. City of Heavenly Fire was honest to goodness never boring. How someone could do that for an almost 800 page book I have no idea but it was fantastic. The action, the humor, the romance, the raw emotions, and the story were all absolutely phenomenal. I can’t believe how fabulous this story was. I could read this series over and over again because this series was amazing and the finale was pure perfection.

I’m going to say a couple things that may or may not get me stoned to death but here is goes. I honestly was hoping but not hoping for more people to die. All the deaths in this story I felt were unimportant. I’m not saying I’m not happy everyone got a happy ending for the most part it’s just….I didn’t care really about the characters that died and I felt the deaths were brushed over.

Another thing is that the ending of this book really didn’t feel like an ending. Possibly because they introduced new characters that are going to be continuing in their own series but I honestly didn’t feel like I was saying goodbye. Whether that’s good or bad I don’t know I’m just commenting.

Teaser:
“Alec looked down at the shattered pieces in disbelief. “You BROKE my PHONE.”
Jace shrugged. “Guys don’t let other guys keep calling other guys. Okay, that came out wrong. Friends don’t let friends keep calling their exes and hanging up. Seriously. You have to stop.”

Swoon:
“There are a hundred trillion cells in the human body, and every single one of the cells of my body loves you. We shed cells, and grow new ones, and my new cells love you more than the old ones, which is why I love you more every day than I did the day before. It’s science. And when I die and they burn my body and I become ashes that mix with the air, and part of the ground and the trees and the stars, everyone who breathes that air or sees the flowers that grow out of the ground or looks up at the stars will remember you and love you, because I love you that much.”

Cassandra Clare was born overseas and spent her early years traveling around the world with her family and several trunks of fantasy books. Cassandra worked for several years as an entertainment journalist for the Hollywood Reporter before turning her attention to fiction. She is the author of City of Bones, the first book in the Mortal Instruments trilogy and a New York Times bestseller. Cassandra lives with her fiance and their two cats in Massachusetts."