Hi everyone!!! So I have an awesome author I asked for an interview and she was great enough to say yes!!! Yay yay yay!! So without further ado here is my author interview with Tera Lynn Childs!! 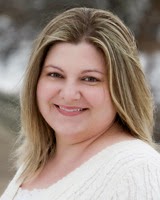 1. What made you decide to become an author? Did you always want to be a writer or did you ever want to be a firewoman of pole dance?

I grew up wanting to be anything and everything BUT a writer. Architect, veterinarian, teacher, marine biologist, actress, lawyer, and yes dancer. I finally found writing after graduate school (where I got a Masters in Historic Preservation) and discovered my love for reading. With free time on my hands, I began obsessively reading historical romance and eventually decided to try writing one myself.

2. I know you've written multiple series, which series required the most research and which one did you have the most fun or difficulty writing?

The answer to all of the above is probably the Sweet Venom series. I actually took two week-long research trips to San Francisco (such a hardship!) to make sure I nailed the city in the story. And the process of writing a trilogy with three first-person points of view... well, it was a tremendous challenge. There might have been tears.

3. What motivates you to write every day? I know it's your job but I love going to school and sometimes don't feel like going so what gets you through those days?

Deadlines. Usually deadlines are my primary motivation. But when I'm working on something new or uncontracted (aka without a deadline) it's usually the magic of the story, the promise of figuring out who these characters are and how their adventures are going to play out that gets me excited about writing.

4. When you aren't at home and have inspiration for a story what do you do?

Well, I almost never write at home anyway. Most of my first drafts are written in coffee shops and cafes, with an Alphasmart on my lap and a playlist in my ears. But as for idea capture, I've recently refined my process from scribble-it-all-in-a-notebook to using Evernote. It makes a really easy (and searchable and taggable) way to just get down those initial thoughts. I have an Inspiration notebook for things that might lead to an idea some day, and an Ideas folder for actual seeds that I might want to grow into a full story.

5. Are there any of your characters that you have based them on someone in your life?

No. Besides the fact that knowing another person well enough to create a fully-fleshed character of them would be nearly impossible, there's also the squidgy thing that something you view as flattering might seem less so to the person being written. That could lead to awkward situations. But there are definitely elements of real people (friends, enemies, family) in many of my characters.

6. I've read your Fins trilogy and I have to wonder what in the first book made you decide that Lily shouldn't end up with her crush and instead with a boy who couldn't swim?

Oh, when I very first started the book I totally thought she was going to end up with Brody. That was the plan... but any writer will tell you that our plans often go awry. Once Quince was on the scene, it was clear that the sparks between them were way more real than the ones Lily only imagined with Brody. Besides, anything that adds conflict (aka a mermaid falling in love with a boy who can't swim) makes it a better story.

I had several, but I think my all time favorite growing up was From the Mixed-up Files of Mrs. Basil E. Frankweiler by E.L. Konigsburg. Okay, maybe that and Logan Likes Mary Anne in the Baby-sitters Club series because it was my first romance. My adult all time favorite is (and forever will be) Pride and Prejudice by Jane Austen because... Darcy.

8. What do you do when you're not writing?

Travel. Graphic and web design. Watch TV. Way too much TV. And, honestly, think about writing. Once you're a writer, your mind is always tuned to that channel. You never know where you're going to find your next idea or what situation is going to spark the answer to the plot knot you've been trying to unravel.

9. If you have any advice for early authors and writers what would it be?

10. If you could be any mythical creature which creature would you be and why?

Easy-peasy: A mermaid. Because water. Because under the sea. And because hot merboys.

Thank you for taking time out to do this for me!

Thanks for having me!


Squeee wasn't that absolutely awesome? What did you think? Have you read anything by Tera before? if so what's your favorite?
Posted by Reese's Reviews at 1:00 AM