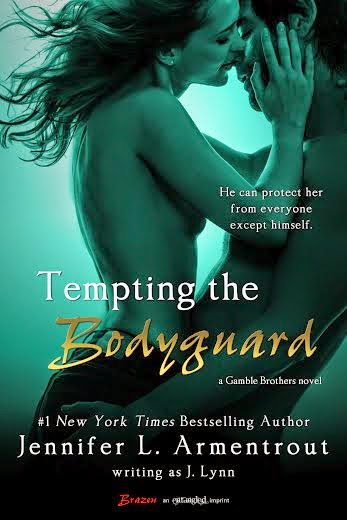 He can protect her from everyone except himself.

Alana Gore is in danger. A take-no-prisoners publicist, her way with people has made her more than a few enemies over the years, but a creepy stalker is an entirely different matter. She needs a bodyguard, and the only man she can ask is not only ridiculously hot, but reputed to have taste for women that goes beyond adventurous.


Chandler Gamble has one rule: don't protect anyone you want to screw. But with Alana, he's caught between his job and his increasingly hard libido. On one hand, Alana needs his help. On the other, Chandler wants nothing more than to take the hot volcano of a woman in hand. To make her writhe in pleasure, until she's at his complete mercy.

She needs protection. He needs satisfaction. And the moment the line is crossed, all hell will break loose...

My Review:
Ho-ly-freaking crap! I swear just when I thought JLA’s books couldn’t get any better and that I had read it all she blows me out of the water with yet another amazing book. I honestly can’t get over just how absolutely phenomenal and breath taking and totally hot book.

Ms. Gore as we knew her in Tempting the Player is totally revamped in my eyes. Alana is in trouble. She’s receiving death threats and she doesn’t know who it is. She knows she’s been cruel sometimes to get results but not enough to warrant the death threat letters she’s been receiving for months on end now. Seeking out help from the only person she thinks of she comes face to face with Chandler her soon to be personal bodyguard.

Chandler is in a sexual rut. After coming face to face with a certain publicist he hasn’t been able to be with anyone else. When she walks in on him in a compromising position claiming she’s being threatened and stalked Chandler doesn’t believe her until he comes face to face with her busted car and violated apartment. Now he knows he has to keep her safe and to do so he has her move in with him. He knows he shouldn’t but his rules fly right out the window when he realizes just how much she wants him too.

Honestly after Tempting the Player I thought there was no way I could possibly like Alana. I was so wrong. I loved her character a whole heck of a lot. She hides a lot of insecurities underneath her cool and uncaring demeanor. She’s very proud of her job and loves the work she does even though people don’t always appreciate her. However, on the inside she’s scared of being close to people and of making connections with people. Alana overcame her fears and I thought she had a lot of character growth. Another thing I absolutely LOVED about her character was her thoughts and reactions to things. She was honestly the most hysterical character I’ve read in a long time.

Chandler is a total hunky hunk-master. Chandler is completely and totally yummy. He’s got abs, he’s got sexy swoon worthy fantasies, and he is a sweetheart. He sees through all of Alana’s insecurities and uncaring demeanor and into the amazing woman Alana actually is. He’s very protective of the people he cares about and I totally enjoyed reading from his perspective. I honestly was a little worried about Chandler having daddy and mommy issues but I needn’t worried. Chandler was honestly the most out of all his brothers.

I loved Tempting the Bodyguard. I loved that all my favorite characters made an appearance and that they had some surprises waiting for us that I wasn’t expecting. I honestly can’t decide if this one was my favorite but I am definitely sad that the Gamble brother stories have come to an end. Tempting the Bodyguard is another amazing book by the even more amazing JLA.

Teasers:
“You have a gun?” she hissed, eyes wide.
He shot her a droll look. “My job sort of requires that, and I said, stays by the elevator.”
She opened her mouth, but then clicked it shut as she backed away, holding that damn file to her chest. He sent her a look of warning and then edged into her apartment.”

Swoon:
“Alana’s eyes were wide as he pulled back, and he knew in that moment, he had to be careful around her, because she was the kind of chick who could steal his heart.
Thing was, he wasn’t sure he wanted to be careful.”

Favorite Quote:
“Damn it, you’re annoying.” She huffed, catching up to him. “Pain in my ass.”
His lips twitched as he fought the smile. “I would love to be in your-“
“Don’t even finish that statement,” she snapped.”

# 1 New York Times and International Bestselling author Jennifer lives in Martinsburg, West Virginia. All the rumors you’ve heard about her state aren’t true. When she’s not hard at work writing. she spends her time reading, working out, watching really bad zombie movies, pretending to write, and hanging out with her husband and her Jack Russell Loki.
Her dreams of becoming an author started in algebra class, where she spent most of her time writing short stories….which explains her dismal grades in math. Jennifer writes young adult paranormal, science fiction, fantasy, and contemporary romance. She is published with Spencer Hill Press, Entangled Teen and Brazen, Disney/Hyperion and Harlequin Teen. Her book Obsidian has been optioned for a major motion picture and her Covenant Series has been optioned for TV.
She also writes adult and New Adult romance under the name J. Lynn. She is published by Entangled Brazen and HarperCollins.
Check out Jennifer at these sites: Wesbite/  Blog/ Facebook/ Twitter/ Goodreads