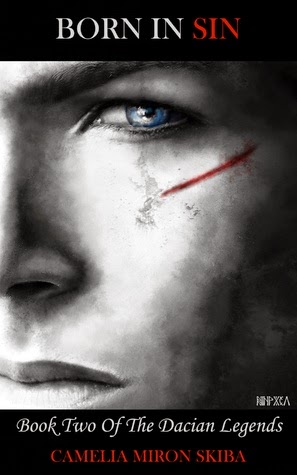 Blurb:
Loathing the thought of his beloved Oriana in the arms of another man, fearless Zyraxes delivers death upon the Roman enemy. With only the rugged land as his bed and the sky as his blanket, trouble finds him often.
Summoned to aid Oriana’s father in the war against two powerful enemies—one of them Oriana's savage husband—Zyraxes proves himself worthy of more than just noble titles and coin. But he wants none of it. What he wants is her.
When Zyraxes discovers a broken and nearly dead Oriana, though forbidden, he disregards her father's orders to leave her to her death, and instead chooses to protect and conceal her. Will saving her be enough to win her heart? Will his part royal lineage make him worthy of her love?


My Review:
Born in Sin is the continuation of the Dacian Legends with  Zyraxes being the narrator.

Zyraxes is a warrior. He lives to fight and avenge the death of the Dacians and to protect his king Ilia so he may one day be the future king. His brothers and he are now locked in a war fighting with their sworn enemy the Romans. When they learn of the Romans trying to take over their allies the Roxolanis they must act fact to warm them of the impending Roman army.

Zyraxes love of his life Oriana was given to another and is now lost to him. When he returns to Roxolanis he doesn’t expect to find his beloved broken and beaten. Oriana has been banished by her father and returned to her homeland to die. Zyraxes has other plans. Meanwhile he must prepare his soldiers and the Roxolanis for war.

Born in Sin is a full length novel and is a continuation on Born in Vengeance. There are a lot more action, violence and battles in this novel than the first.  Born in Sin explains the situation between the Dacians, the Romans, and the Sarmatians in more depth than we received in the first novel which helped this story a lot.

Zyraxes was an interesting character to read about and he had a lot of stories to tell about his past, his brothers, and Oriana. Zyraxes is a healer and he cares a lot about taking care of injuries and the sick. While he is a fierce warrior he was very compassionate towards people.

All in all, I would have to say I enjoyed Born in Sin more than I did Born in Legend. The detail and historical information was fascinating. As well as all the details of training and the actions scenes were quite enjoyable.

Who I was yesterday … I’m no longer today, nor will I be tomorrow. Each day I grow a little. I stumble, get up, and learn something. I wish and dream and want and look to the future. Who I am is not important, but what I leave behind is.