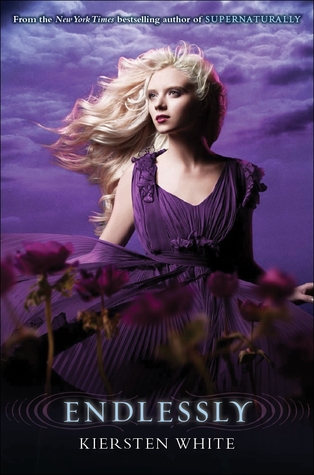 In Endlessly, pink-loving, butt-kicking Evie has way too much on her to-do list. Paranormals are begging her to open a faerie gate so they can leave the human world, something Evie’s not sure she has the power to do. The Dark Queen is torturing humans and must be destroyed.

On top of all that, Evie’s prom is coming up. She’s not sure what to wear, and, oh, yeah, her shape-shifting boyfriend, Lend, has been cursed so that he falls into an enchanted sleep whenever he and Evie are in the same room…and even Evie’s ex-boyfriend, the faerie Reth, can’t reverse the dark magic.

An epic battle is looming, and the choices Evie makes will determine the fate of whole paranormal world—and her own life.

My Review:
So I finally read Endlessly. I know it came out two freaking years ago and I am just getting to it but honestly I was putting off ending this series. I am so proud of myself for finally reading this freaking book after two flipp’n years of it being on my shelf.

Evie’s story has finally come to an end in Endlessly and she has a new job, send all the creatures that used to belong to the world of the Fae back to their world. Opening this portal could cost her her own life but what other choice does she have? Especially since after Lend gets kidnapped by the Dark Fae and cursed to pass out every time they’re in the same room as each other she sets of to save the world and fix lend.

Endlessly really flowed I thought. Evie and Lend have friends and are having a great life until one day they’re knocked back into the world of the supernatural. I enjoyed how fast paced the book seemed to be. Everything was wrapped up really well from all the books and Evie’s character made great developments over the course of the book. She still loved Tasey, and all things pink and glittery. She hadn’t changed in the two years since I read her character and I really enjoyed almost everything about her.

So I loved book one and two and I sped through this book as well but Evie’s character really ticked me off in this book. I hated how when she had everything she could ever want she refused to help anyone but herself. She only did things when there was something in it for her which was irritating beyond belief. I am come on? I like my characters to believe in butt kicker-y and saving the world is important. Not: well it doesn’t affect me so oh well.

In the end everything works out but not without a little heart break and loads of action and surprises. Evie finally gets the family she’s always wanted.

I highly recommend this series if you haven’t read it yet. There’s lots of secrets, evil government agencies, supernatural creatures, soul suckers, and high school prom. What more could you want out of a YA book?

Kriesten White did an amazing job crafting Evie’s world and I am so happy with how everything ended.

“Reth looked exasperated. “When is something ever not wrong in your life?”
I frowned. “That’s my line.”

Hi! I'm the New York Times best-selling author of Paranormalcy and Supernaturally. I also give the most awkward hugs in the world. You should probably opt for one of my books over one of my hugs, but then again, maybe you like awkward hugs.
As for me, I like writing flirting scenes, and fighting scenes, and sometimes I write scenes that fall somewhere in between the two, but only if I can't avoid it.
Find Kiersten White here: Blog/ Goodreads/ Twitter/ Facebook
Posted by Reese's Reviews at 1:00 AM