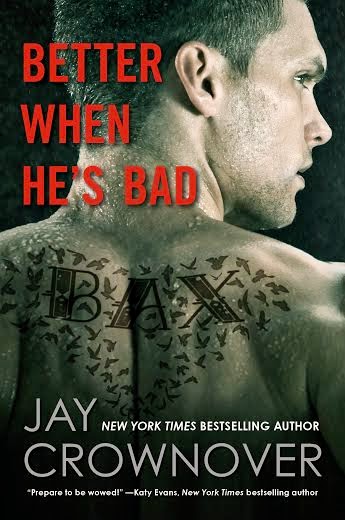 There’s a difference between a bad boy and a boy who’s bad . . . meet Shane Baxter.

Sexy, dark, and dangerous, Bax isn’t just from the wrong side of the tracks, he is the wrong side of the tracks. A criminal, a thug, and a brawler, he’s the master of bad choices, until one such choice landed him in prison for five years. Now Bax is out and looking for answers, and he doesn’t care what he has to do or who he has to hurt to get them. But there’s a new player in the game, and she’s much too innocent, much too soft…and standing directly in his way.

Dovie Pryce knows all about living a hard life and the tough choices that come with it. She’s always tried to be good, tried to help others, and tried not to let the darkness pull her down. But the streets are fighting back, things have gone from bad to worse, and the only person who can help her is the scariest, sexiest, most complicated ex-con The Point has ever produced.

Bax terrifies her, awakening feelings she never thought she’d have for a guy like him. But it doesn’t take Dovie long to realize . . . some boys are just better when they’re bad.

My Review:
Holy sex on toast that book was made of fantastical magical things. For fans of the Marked Men series if you think you loved Jay Crownover’s books before you haven’t seen anything yet. Better When He’s Bad is a phenomenal story with that definitely had me craving more long after I finished reading.

Shane has been in prison for five years after being set up and now he’s out and needs answers. Getting back to the Point he realizes he isn’t the only one looking for the one person who needs answers. His best friend has stirred up trouble and now Bax needs to figure out what went down then and why his friend has come out of hiding only to disappear again. In looking for his best friend he runs straight into Dovie his best-friends secret half-sister.

I am honestly in love. I didn’t think it could get better than the Marked Men series but holy smoked unicorn it totally CAN and DID! Bax and Dovie were absolutely amazing characters. They both has a great sense of humor and pasts they can’t get rid of. They both grow a lot throughout this book and I can honestly say they start off as amazing and only get better. Shane(Bax) is a total badass who doesn’t take crap from anyone. He doesn’t believe he’s a good person and he’s very cynical of everyone and everything. He’s a total dick when he firsts sees Dovie and I don’t know if this means I suck but I kind of liked that. Every reaction he had to things seemed to be realistic and I totally loved that. Dovie is just so freaking adorable and honestly she totally kicks ass too. She seems to have an innocence about her that is almost untouchable, but when shit gets real she’s strong and does what she needs to do to protect the ones she cares about.

Better When He’s Bad is action packed with fights, guns, cops, and sexy times. Of course it wouldn’t be a bad boy story from Jay without the fantastical sexy scenes. I mean they are hot too! They do it a lot of places too just saying you will be jealous of Dovie because Shane(Bax)  is a totally hottie mc sexy pants.

So anyone who loves bad boys with tats who are sexier than life than you need to pick up Better When He’s Bad by the amazingly talented Jay Crownover. Better When He’s Bad will have you grabbing your B.O.B.’s and a fan because the scenes with Bax in them are seriously that hot. Expect to be taken on an emotional rollercoaster that will have you crying, laughing, and questioning everything you know about bad boys.

Teaser:
There are very few things that can kill the buzz of postsex mellowness. Getting coldcocked in the side of the head by a pair of knuckles that felt like they were encased in steel ranks right at the top of the list.”


Swoon:
“I wasn’t into all that power and domination crap, but with her, man, I could play lord and master all day long if she was into it.”

The golden bat which is better than a 5/5 for me!

GIVEAWAY:
There is a Blog Tour giveaway. It includes 5 prizes for 5 individual winners! 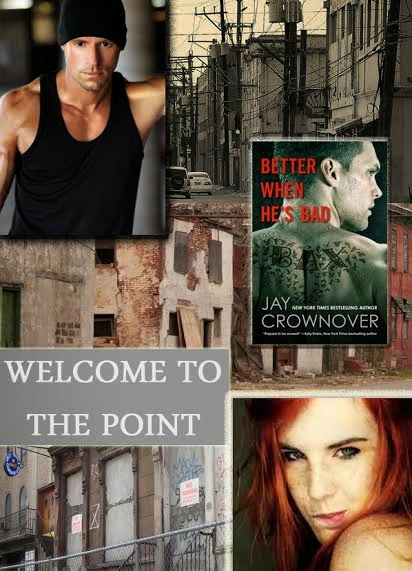 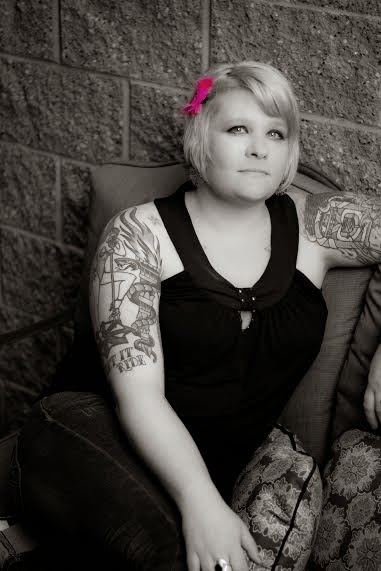 About Jay Crownover:
Jay Crownover is the New York Times and USA Today bestselling author of the Marked Men series. She will also be introducing the dark and sexy world of The Point in a new series this summer starting with Better When He’s Bad. Like her characters, she is a big fan of tattoos. She loves music and wishes she could be a rock star, but since she has no aptitude for singing or instrument playing, she'll settle for writing stories with interesting characters that make the reader feel something. She lives in Colorado with her three dogs.