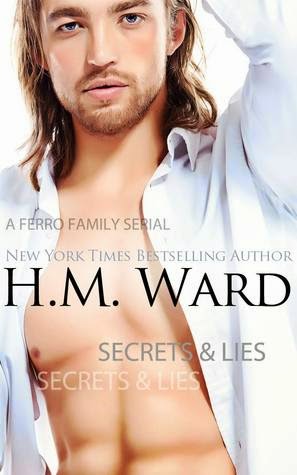 One night, one time. That's all. I'll have a clean slate.


A guy with a sketch pad, sitting alone, catches my eye. I'm a sucker for the artistic type with dark hair and bright blue eyes. Soon we're in his hotel room doing things I've never done. His smoldering body, perfectly toned with hot skin and a firm touch, has my mind reeling with the things to come. We're both naked and glistening with sweat, breathless.

And then he darts, right before doing the deed, abandoning me in his room. He doesn't return.

A week later I see him again, and realize that he wasn't just a random guy. My heart clenches at the massive mistake, and I still don't grasp the extent of it. I should have run and never looked back.

My Review:
Wow, just wow! I am in love with the Ferro family ok? They rock with their hotness and emotional baggage. You just can’t beat it. Secrets and Lies honestly isn’t much different than H.M. Wards other stuff. Hold the flame thrower ok? Not dissing just give me a second. Secrets & Lies reminds me a lot of Damaged which let me just tell you made me want to do a happy dance because I loooved Damaged. However, it wasn’t the same. Just to get that out there.

Kerry’s luck really sucks so much in this book I honestly almost died from laughing. I know laughing at other peoples misfortunes or whatever but seriously I almost died. Let me just say feral raccoons, buses, and no clothes. P.S. Those did not happen at the same time. Anyway Kerry is all kinds of adorable. She isn’t the jaded comes from crap family or no family thing you usually get in a Ferro story and I have to say that was sort of refreshing. Kerry is just a normal college freshman with a craptastic roommate and bad luck.

Okay now my favorite part: Beth! I honestly loved Beth. She reminds me so much of myself (not the complete reason I love her but added bonus) and she is just hilarious. She befriends Kerry on her first day and I can tell that in the next six installments she’s going to be lots of fun.

So Kerry as I stated has bad luck and when she goes one night to have a one night stand she ends up getting hot and heavy and then dumped when a phone rings. I know douche moves. So Kerry tries to move on and she meets some people who end up to be friends in the making all the while having even more bad stuff happen to her when Bam out pops Mr. Douche who happens to be friends with her friends. Whoops!

So needless to say I need some more of this. Honestly I love Mrs. Wards stuff. She’s fantastic and so I will wait “patiently” for parts 2-6 I know they will be worth it and angst ridden. Can’t go wrong with  Ferro…just saying!

Favorite Quotes:
“You can’t ask her that! I met her, like, an hour ago and you’re already asking if her ex satisfied her sexually? God, Josh! Go to the store and buy some manners.” H.M. Ward is a NEW YORK TIMES bestselling New Adult author, having sold over 5 million books since her debut in 2011.
This NEW YORK TIMES, WALL STREET JOURNAL, USA TODAY, and Amazon #1 bestselling writer's series include: THE FERRO FAMILY: DAMAGED, THE ARRANGEMENT, and STRIPPED; as well as SCANDALOUS, TRYSTAN SCOTT, and SECRETS. Ward was recently featured in FORBES, the WALL STREET JOURNAL, and the WASHINGTON POST
Check Ms. Ward out at these sites: Website/ Blog/ Facebook/ Twitter/ Goodreads/ Pinterest