Review: The Hunt by Stacey Kade 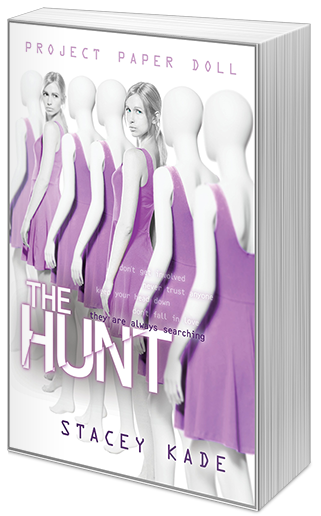 Blurb:
Ariane Tucker has finally escaped GTX, the research facility that created her. While on the run, Zane Bradshaw is the only person she can trust. He knows who-and what-she is and still wants to be part of her life.

But accepting Zane's help means putting him in danger.

Dr. Jacobs, head of GTX, is not the only one hunting for Ariane. Two rival corporations have their sights set on taking down their competition. Permanently. To protect Zane and herself, Ariane needs allies. She needs the other hybrids. The hybrids who are way more alien and a lot less human. Can Ariane win them over before they turn on her? Or will she be forced to choose sides, to decide who lives and who dies?

My Review:
I had super high hopes for The Hunt since I loved The Rules so much. Stacey Kade did not disappoint with this amazing sequel and I am now officially ready for the third book.

Arianne and Zane are on the run after Arianne broke out of GTX to save Zane. Zane is looking for his run away mother and Arianne is struggling with what to do. She has money, passports, and all the skills to stay hidden for a long time but, she wants Zane and Zane doesn’t want to leave her despite the risk. Meeting up with Zane’s mother opens a whole new can of worms and Arianne finds out she is very close to her rivals. On a mission to save Zane’s brother she teams up to break the other alien-hybrids from their addiction so they can help, and that’s when everything goes wrong.

Arianne and Zane had a very different feel to them in this book. Zane and Arianne are both scared and dealing with an identity crisis. Arianne is constantly being told in this book she doesn’t belong and the little self-esteem she has is constantly being ripped on. She becomes defensive about things that don’t matter and is fighting within herself to see the right thing to do. I really didn’t like how she refused to talk to Zane about anything. I felt he deserved more credit than she gave him since he did run away with her. It made me sad because I felt I would see a more vulnerable side of Arianne than I had previously seen in the first book and that just didn’t happen.

Zane was the once confident one. He used to think all he was dealing with was high school drama and now after getting a glimpse at Arianne’s world he feels inadequate. He really cares for Arianne and it really shows in this book what lengths he is willing to go to, to stay with her. His issues that were glazed over in The Rules is really put in the forefront of this book as he struggles with the issues of his mother and his family. He is constantly scared that Arianne will leave him or that people are trying to betray them.

The Hunt definitely had the feel of set up for the next book. The Hunt introduced new characters, new Institutes, and a whole set of new problems Arianne and Zane will have to face. There were a lot more slow parts I felt in this book than the last book and the whole book just had the feel of trying to set up for the next book, a transitional book.

All that being said I truly did enjoy this book. The writing was just as phenomenal as the first book if not better. I could feel what the characters feel and even with all of Arianne’s b.s. I really do still love her as a character and I understood why she felt the way she did even if I didn’t like it. Zane is still an amazing character too and he always puts Arianne before everything else because he knows she puts herself last. The action didn’t really happen until the end but it was well worth the wait.

That ending truly blew my mind. I honestly cried and threw the book on the ground. Major intensity and I cannot wait for book three. The ending killed a little part of me and I need to find out what happens next.

All in all: Get this book asap if you have read the first book. If you haven’t (what are you waiting for???) you need to get your copy soon. Thank you Stacey Kade for producing another heart racing, gut wrenching book.

example, example, exampleAs a former award-winning corporate copywriter, Stacey Kade has written about everything from backhoe loaders to breast pumps. But she prefers to make things up instead.
She lives in the Chicago suburbs with her husband, Greg, and their two retired racing greyhounds, Tall Walker (Walker) and SheWearsThePants (Pansy).
Find Stacey Kade here: Website/ Twitter/ Goodreads/ Facebook