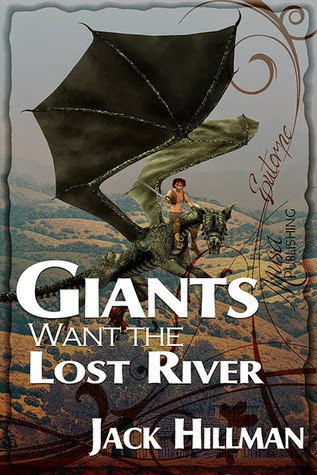 Blurb:
It's up to Eric Johnson and his friends to stop the Frost Giants from taking over Enigma Caverns. But when Eric is thrown in the Lost River, he takes a trip much farther than anyone could plan.

When Eric Johnson moved from Philadelphia a year ago, he didn’t have any friends in the Lehigh Valley. Now he has a lot of them, just not the usual sort for a twelve-year old boy. Aside from Tommy Kuhns and Stephanie Fuller-two young children his own age-Eric’s house is often visited by Norse Gods, Rock Dwarves, Valkyr, and unfortunately the occasional Frost Giant. And most teens aren’t caught up in a war that crossed multiple dimensions.

Now the Frost Giants are trying to get access to Enigma Caverns and the Lost River, so they can continue their battle against the Aesir and conquer the people of Earth as well. Eric, Tommy and Stephanie have to find out why the Giants really want the Lost River and stop the Giants from taking control of Enigma Caverns.

When Eric is thrown into the Lost River and disappears, things really start to get strange!


My Review:
Wow. What a wild ride. I enjoyed the first book There are Giants in this Valley and so I just had to grab the sequel and I was pleasantly surprised the sequel was as good as the first book.

Eric in the last book battled Frost Giants and bullies and met the Norse Gods and is now home after that exciting journey. But the adventure isn’t over yet. Eric and the Frost Giants go to battle once more over a powerful river.

I liked this sequel a lot although some parts dragged for me. Other than that Eric was a funny character to read about and I liked that he finally got to have some friends instead of always being lonely. Giants Want the Lost River was a fun all day read for me and Jack Hillman definitely does an amazing job writing these stories.

I would suggest these two books to middle grade readers simply because of Eric's age.