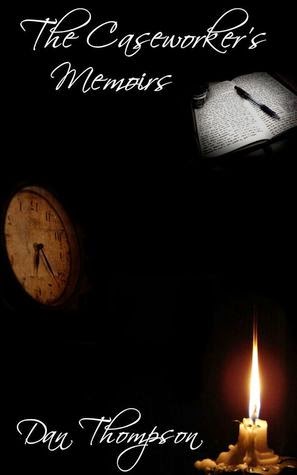 Blurb:
"I feel old. Terribly old. I no longer recognise the man, whose face is filled with such sadness and unfulfilled ambitions, glaring back at me. It's the shadow of me; a darker, duller shade that shells inside a lonely old man."

... And so begins The Caseworker's Memoirs. Malcolm was losing touch with the world; a retired counsellor and recently widowed, he lived each day sat at his desk, watching the world pass him by. That’s until his daughter gave him a leather-bound notebook. She encouraged him to write about times long past that he shared with his loving wife, but as dreams of his previous patients take hold of him, he has no choice but to share his experiences and thoughts.

This is Malcolm’s attempt to rid himself of his pent-up guilt, his emotional involvement with the people he feels he has failed, but perhaps most of all, his attempt to have a purpose in life.

From the rational fear of heights to the peculiar fear of time, from the obsessive fear of terrorism to the psychological ignorance of homophobia, The Caseworker’s Memoirs is not only a tale of one man’s grief, but also the tale of seven other people that are affected by real phobias. This is a modern contemporary drama that will pull on the heartstrings as well as capture your imagination.


My Review:
I received a copy of The Caseworker's Memoirs for an honest review.

I wasn’t expecting to enjoy this book at all if I am to be completely honest. After putting this book off for so long I finally read it and what a pleasant surprise it was that I could barely put it down.

The story starts off with how Malcolm came to write about his story and the story of those he helped. He is lost and alone after his wife died and his daughter wanted him to write down his stories.

Honestly the writing style of a journal has never really pulled me in like this book has. I felt connected to the character more than if it were written differently. The stories he tells deal a lot with fear and how his patients dealt with it.

All in all, I actually enjoyed this story a lot more than I thought. The different stories and the different lives of all the characters felt so real. Dan Thompson did a great job at writing this story. If you are into memoirs this is the book for you.

He is the Author of the charity poetry book Life is all but a vast array of Colours and phobia Novella The Caseworker's Memoirs. His first full length novel, A YA Fantasy entitled The Black Petal will be available soon. Also in 2014, a dark young adult / new adult novel will be released.

A lover of YA and fantasy fiction, you can often find him writing on his blog, writing book reviews and connecting online with other writer-type people and interviewing authors. Dan grew up reading Enid Blyton's The Famous Five series, secretly coming up with his own inventive adventures, and R.L Stine's The Goosebump series, before turning to the works of Philip Pullman, Eoin Colfer and Marcus Sedgwick and slipping away into alternate realities. He also loves a good Historical Thriller too.