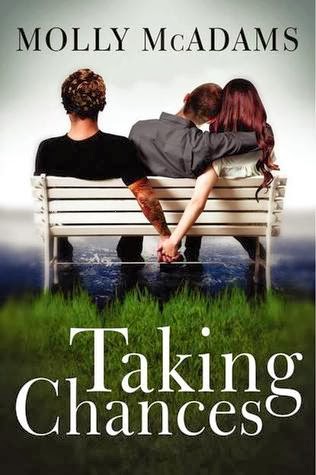 Blurb:
Her first year away is turning out to be nearly perfect, but one weekend of giving in to heated passion will change everything.

Eighteen-year-old Harper has grown up under the thumb of her career marine father. Ready to live life her own way and to experience things she's only ever heard of from the jarheads in her father's unit, she's on her way to college at San Diego State University.

Thanks to her new roommate, Harper is introduced to a world of parties, gorgeous guys, family, and emotions. She finds herself being torn in two as she quickly falls in love with both her new boyfriend, Brandon, and her roommate's brother, Chase. Despite their dangerous looks and histories, both men adore Harper and would do anything for her, including taking a step back if it would mean she'd be happy.

My Review:
Ok first let me start out by saying that after reading Between the Covers and having the three chapter excerpt of Taking Chances I was super excited to read it. Molly McAdams is an amazing writer who truly makes the characters feel alive. That is the only reason this book has a rating at all because the rest of this book was…well not okay with me.

First off let’s start with every character surrounding Harper. Why did everyone like her? I’m not saying she sucked or anything but she had no interests, no hobbies, and no real personality besides in her head. What was portrayed to everyone else? I don’t know because I feel maybe Molly McAdams skipped out on writing it in there. Every freaking person that met Harper was like “oh I would so have your babies!” Why though? I think I’m pretty freaking awesome and nobody treats me the way they treat Harper.
Take for instance Brandon her boyfriend whom Harper cheats on twice, has another mans baby and yet he STAYS WITH HER! WTF!

I guess my problem with that is maybe this book is too realistic for me. I know people like that who cheat and are still going back to their partner at home. That’s not cool and you are a horrible person.

I have been cheated on before and you want to know where that guy is? Living in in parents’ basement working at Menards, which is exactly what should have happened to Harper. I get living a little, honest I do, but that does not mean spread your legs for just any ol’ body. Yeah sure she knew Chris for around the same amount of time she knew Brandon but that doesn’t mean sh*t because YOU ARE WITH SOMEONE ELSE!!!

Honestly I think I just covered this entire book….

I don’t know honestly if I hadn’t of enjoyed Molly McAdams writing so much I would NOT have finished this book and that is the truth. The storyline sucks major monkey balls. I hate cheaters. I hate that Brandon the nice guy basically got craped on and was still happy to do it because he “loved” Harper so much. What is there to love about her? I don’t get it.

Let’s move on to Chris. He claims to be madly swooning for Harper even though he treats her like crap and bruises her. After the two of the get in on like donkey kong and he acts like it’s the best sex ever and you know what it probably was. Why? Because he had to wait for it. The entire book all he wants to get have sex with Harper and be with Harper and from a playboy who isn’t used to hearing no? Well then he decides Harper is EVERYTHING he wants. Yeah I’m shocked. It’s like waiting for a piece of pie, the wait sucks so when you finally get it it’s a very happy day indeed and it will taste better than if you had pie just sitting in the fridge waiting for you.

Poor pathetically sexy Brandon who I promise you is everything you could ever want in a boyfriend and he is manipulated, used, and played for a fool. He gets cheated on and then still decided he wants to marry Harper. First of all little boy how old are you? I think maybe you should finish college first but whatever.

I honestly when I found out about this book at a signing I was put off by it because Molly McAdams said she didn’t like reading and only started reading because of Twilight. Yeah that was kind of disappointing to hear. Am I saying she’s a bad writer? No. Neither author is question sucks at writing but honestly? How seriously can I take you when you say you hate reading and writing? I guess it is what it is but I don’t think I will ever touch another molly McAdams book again.

All in all the bad truly outweighed the good in this novel. I just can’t condone cheating. It’s not okay and the only message that I got from Taking Chances what that it was. Harper took all the chances she wanted ended up getting knocked up, she cheated on her boyfriend, killed someone, and yet still got a happy freaking ending. Not okay with me at all. So am I saying this book is horrible? No. I’m saying it wasn’t for me. I like my characters with more depth than a piece of paper.

Molly grew up in California but now lives in the oh-so-amazing state of Texas with her husband and furry four-legged daughters. When she's not diving into the world of her characters, some of her hobbies include hiking, snowboarding, traveling, and long walks on the beach … which roughly translates to being a homebody with her hubby and dishing out movie quotes. She has a weakness for crude-humored movies, fried pickles and loves curling up in a fluffy comforter during a thunderstorm ... or under one in a bathtub if there are tornados. That way she can pretend they aren't really happening.