Review: The Edge of Never by J.A. Redmerski 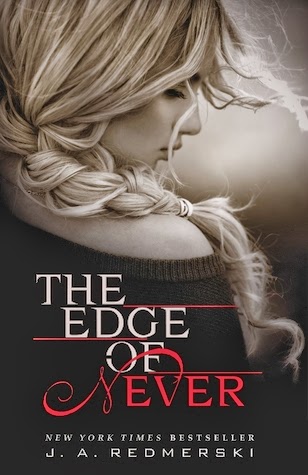 Blurb:
Twenty-year-old Camryn Bennett had always been one to think out-of-the-box, who knew she wanted something more in life than following the same repetitive patterns and growing old with the same repetitive life story. And she thought that her life was going in the right direction until everything fell apart.
Determined not to dwell on the negative and push forward, Camryn is set to move in with her best friend and plans to start a new job. But after an unexpected night at the hottest club in downtown North Carolina, she makes the ultimate decision to leave the only life she’s ever known, far behind.
With a purse, a cell phone and a small bag with a few necessities, Camryn, with absolutely no direction or purpose boards a Greyhound bus alone and sets out to find herself. What she finds is a guy named Andrew Parrish, someone not so very different from her and who harbors his own dark secrets. But Camryn swore never to let down her walls again. And she vowed never to fall in love.
But with Andrew, Camryn finds herself doing a lot of things she never thought she’d do. He shows her what it’s really like to live out-of-the-box and to give in to her deepest, darkest desires. On their sporadic road-trip he becomes the center of her exciting and daring new life, pulling love and lust and emotion out of her in ways she never imagined possible. But will Andrew’s dark secret push them inseparably together, or tear them completely apart?
Due to sexual content and language, this book is recommended for 17+ – Adult Contemporary Women’s – New Adult Fiction

My Review:
The Edge of Never while enjoyable I wasn’t in love with it. I’m not sure what it was about the book, but I just wasn’t drawn into it.

Mini Blurb:
Camryn Bennett has been coasting through life for the last year in a sort of fog. Her family and her friends seem to have moved on with their lives, but Camryn is stuck in the past. When something really craptastic happens with her friends Cam has decided she’s had enough. She packs few essentials and high tales it to a bus heading to Idaho. It’s on the bus she meets Andrew who is on the way to see his dying father. When Cam gets in trouble he brings her with him on a journey that changes their lives.

Likes:
So The Edge of Never is hilarious. I cracked up during so many of these scenes especially the one in Wal Mart. The humor in this novel was fantastic and I definitely think that helped this book out for me in the end.

Andrew! I loved Andrews’ character from his first appearance to his first chapter with his pov in it. You know I love books with dual pov so that really made me love this book since Cam was not really my favorite character. Andrew definitely has the vulnerable bad boy persona that I love with my book boyfriends. He’s a risk taker and takes Camryn on the adventure of a life time simply because he likes her and wanted to keep her safe. Total swoon worthy guy.

The adventures that Cam and Andrew went on were so adorable and fun. I enjoyed seeing them both take risks and just enjoy being alive and the amazing scenery they got to see was a real upside to reading this book.

Dislikes:
I think the aspect of this book I had a hard time connecting to was Camryn. I honestly felt absolutely nothing for her as a character. I’m not sure why but she just fell flat to me. I didn’t care about her past, her in the present, or even when at the end of the book and tragedy stuck I couldn’t care less about her. Like I said I don’t know why, but I honestly felt nothing for her.

The sexy time scenes were lack luster to me. Honestly for all the big game both of them talked and thought about when thinking about “doing each other” when they finally did all I could think was “oh, that was it?” It just fell flat to me because they totally had the makings of a dom sub relationship that could have been really hot and Andrew totally topped off my imagination when he says “If you were to let me f**k you, you would have to let me own you.” I know where is the fan right? But then when they finally did the deed it was in a nut shell (some hot kisses and bam it was over). Hello but uh what happened to “owning” the only owning was “hey I’m going to do all the work and you just need to stay quiet until I tell you not to.” I just feel like there was such a great build up that could have been there and all it did was womp womp womp.

Lastly, the ending was irritating.  Alright so there is this huge thing that happens at the end with Andrew and then we find out that Camryn is pregnant. *sigh* I just find that so freaking stupid. I know people get pregnant all the time which is absolutely 100% awesome for them, but really? I mean come on neither of you finished college. Camryn doesn’t have a freaking job. I mean if what happened to Andrew had ended up differently? It just seems like a crap ending.

I guess what I'm saying is after all the hype I was super excited and now I'm just left disappointed and sad I have the second book.

Teaser:
“A smile warms my face and I glance away and say “Well everybody needs help feeling alive again every once in a while.”
“No,” she says seriously, and my gaze falls back on hers, “I didn’t say again, Andrew; for making me feel alive for the first time.”


Swoon:
“My tongue moves against hers slowly, tasting it first, feeling the warm wetness of it as it begins to tangle with mine. We breathe deeply into each other’s mouths and, unable to resist her or deny her this one kiss, I grab each side of her face and press her forcefully against me.”

Born November 25, 1975, J.A. (Jessica Ann) Redmerski is a New York Times, USA Today and Wall Street Journal bestselling author. She lives in North Little Rock, Arkansas with her three children and a Maltese. She is a lover of television and books that push boundaries and is a huge fan of AMC’s The Walking Dead