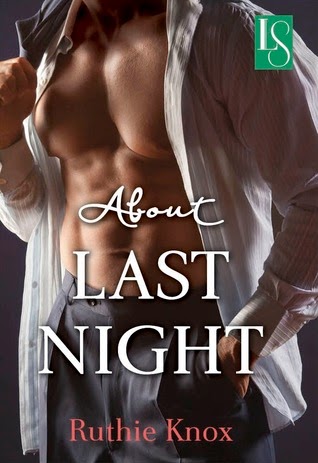 Blurb:
Sure, opposites attract, but in this sexy, smart, eBook original romance from Ruthie Knox, they positively combust! When a buttoned-up banker falls for a bad girl, “about last night” is just the beginning.

Cath Talarico knows a mistake when she makes it, and God knows she’s made her share. So many, in fact, that this Chicago girl knows London is her last, best shot at starting over. But bad habits are hard to break, and soon Cath finds herself back where she has vowed never to go . . . in the bed of a man who is all kinds of wrong: too rich, too classy, too uptight for a free-spirited troublemaker like her.

Includes a special message from the editor, as well as excerpts from these Loveswept titles: Because of You, Ride with Me, and Midnight Hour.

My Review:
Cat and Nev couldn’t be more different. Nev has class, money, and talent. Cat has a horrid past that holds nothing but pain. Cat has only known Nev as City since she first saw him on and she never expected to find out his name or anything else about him, but one drunken night on the train and she wakes up in his bed.

Waking up in a strange place isn’t a new experience for old Cat but new cat is appalled that she doesn’t know where she is, whom she was with, or how she got there.  When she realizes it is City the man she’s been lusting over when she sees him on the train she realizes he isn’t what she expected.

About Last Night is filled with loads of steamy scenes, an adorable pampered Brit, and a feisty female character from the wrong side of the tracks. After spending one day together all Nev wants is to be with Cat but Cat keeps pulling away.

Cat has never made the right decisions when it comes to men and even after meeting Nev and seeing how perfect he is she doesn’t trust herself after her colored past. Nev is persistent however and when her job falls through and Nev is the only one who can help her he strikes a deal: go home with him for one weekend so he can keep his job and he’ll get the money she needs for her to finally be published.

About Last Night is a tangled story of a controlling family a American woman trying to keep her head up and a man who finally realizes what it means to stand up for what he wants.

I have to say I was kind of disappointed with About Last Night. I expected Cat to be I don’t know, such a stronger less dodgy character. All she did the entire book was knock herself for her mistakes years ago and that got old fast.

Nev was adorable and sexy and I loved his character. While he was a little wimpy when it came to standing up to his family he made up for with everything else. I really loved reading from his perspective and I think that’s what saved this book for me.

Overall the storyline was predictable but enjoyable. A quick read with humor, steamy romance, and self-discovery. The characters did grow a lot and I had to say that’s another reason About Last Night wasn’t bad, the characters grew.

Bottom line is if you’re looking for a quick fun easy read About Last Night is one you may enjoy. Happy to say after being on my tbr pile for 3 years or so I am so glad it’s finally off!

Teaser:
He traced the shape of the bird, wondering what she could have done to merit writing herself a memo on her body.
“It’s a very permanent sort of reminder.”
She raised herself up slightly, catching his gaze and holding it. “They were really bad mistakes.”


Swoon:
You brought me here with impure motives?” The idea gave her a stupid thrill.
He shook his head. “No. I developed them after you arrived.”

USA Today bestselling author Ruthie Knox writes contemporary romance that’s sexy, witty, and angsty—sometimes all three at once. After training to be a British historian, she became an academic editor instead. Then she got really deeply into knitting, as one does, followed by motherhood and romance novel writing.

Her debut novel, Ride with Me, is probably the only existing cross-country bicycling love story. She followed it up with About Last Night, a London-set romance whose hero has the unlikely name of Neville, and then Room at the Inn, a Christmas novella—both of which were finalists for the Romance Writers of America’s RITA Award. Her four-book series about the Clark family of Camelot, Ohio, has won accolades for its fresh, funny portrayal of small-town Midwestern life.

Ruthie moonlights as a mother, Tweets incessantly, and bakes a mean focaccia. She’d love to hear from you, so visit her website at www.ruthieknox.com and drop her a line.

Check Ruthie out at these sites: