Behind the Wheel by N. Peligeiro 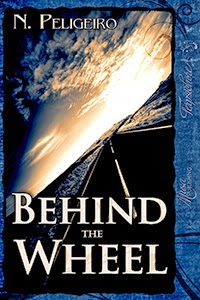 Blurb:
Behind the Wheel deals with Nick’s attempt at living the dream. What dream? Nick’s not real sure either, but it takes a job that turns out to be a little more than he bargained for to help answer that question.

Nick is part of a group of Americans and Canadians contracted to teach English at a distinguished bilingual private school in Northern Mexico. The principal is a clown and the students could benefit from summers spent at boot camp. Then there’s the insurmountable work load.

But things at school aren’t so bad when compared with the raging drug violence just down the block. No one is too sure why the cartels insist on cutting everybody’s head off. It seems like quite a laborious task for a body count currently around 55,000.

Nick suspects living the dream has to do with a job and a life that make a little more sense than what Colegio Munich and Torreon have to offer. He’s not sure where to go or what to do after leaving, but he knows what not to look for.

My Review:
I received a copy of Behind the Wheel for an honest review.

Behind the Wheel was definitely not what I expected. I thought the story would follow the main character Nick who would travel around the world to see many things. Boy was I wrong.

Nick is going on a journey to Mexico after getting a job offer and recovering from his illness. After bearing excruciating pain for a long time with no diagnosis he discovered he had Lyme disease. Now that he’s recovered he moved to Mexico to start a new life. However, he never expected what would happen when he started teaching. The students, the teachers, the principal are in a bad way as is the community he’s in. He struggles every day with disciplining his students as much as he can but it’s not enough. All Nick wanted was to find his dream but the dream seemed to becoming darker.

The story was interesting enough I guess, the only problem I had was that I really didn’t care. At all. The endless description, the boring characters, and the crap situation. I just couldn’t have cared less about it.

Behind the Wheel was well written, but it just wasn’t for me.

N. Peligeiro is still trying his hand at teaching and learns more as he goes. He doesn’t subscribe to that whole “those who can’t do, teach” theory and he repents for being less than a model student back in Minnesota when he was young and knew he knew it all.
Currently Mr. Peligeiro is probably somewhere in South America, but it’s hard to say because he moves around a lot and burns through money because he has a space between his two front teeth that he hasn’t gotten fixed yet even though an old Chinese sage told him it was bad physiognomy and he’d always have financial problems while the space remained.
He likes to write when he’s got something to say. When he doesn’t he keeps his mouth shut and his pen capped.
Behind the Wheel is available for purchase at Musa Publishing http://musapublishing.com/index.php?main_page=product_info&cPath=2&products_id=526

N. Peligeiro likes to think he writes travelogues. Tom Waits said his songs were travelogues. But he’s not a travel writer. Behind the Wheel deals with time spent in Mexico. It’s a tale of being had, drinking, debauchery, Mexican drug cartels, downward spirals, redemption (upward spirals), and dreams turning into nightmares. It’s personal but it’s also timely and deals with drugs, violence, and border issues. Behind the Wheel is available for purchase at Musa Publishing http://musapublishing.com/index.php?main_page=product_info&cPath=2&products_id=526