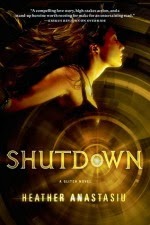 Blurb:
The battle is all but over, and hope seems to be lost. Zoe and her fellow Resistance fighters are on the run, having lost their home, their protection, and their leader. They are outnumbered and outmatched by the powerful corporation that controls the world, and the cruel Chancellor is inches away from completing a scheme that would kill most of humanity. Zoe's only remaining option is to chase the impossible dream of upending the Link system, freeing the world from the hardware that controls their thoughts and emotions, and hope it will trigger a revolution.
The plot requires a nearly impossible mission to infiltrate the dangerous Community, and it is a task that Zoe must unfortunately complete alone. With challenges and surprises at every turn, nothing goes according to plan. Adrien's visions of the future now show two possible outcomes: one in which they succeed, and one in which humanity falls. It all lies in Zoe's hands.
Full of romance, high-adrenaline action and shocking twists, Shutdown is a heart-pounding conclusion to an exciting sci-fi adventure trilogy for young adults.
The thrilling conclusion to an action-packed sci-fi trilogy.

My Review:
Oh my goodness it’s finally over. I honestly cannot believe it. I have been both dreading and craving this moment since Glitch first landed in my hands two years ago.

P.S.: DO not read this review if you have not read book one or two it will seriously spoil a whole boat load of things for you.

From the first vision Adrien had of Zoe they have been connected. Now after retrieving him from the Chancellors grasps it seems all hope is lost to recover the boy she once loved. In his place is someone who can hardly feel and sees everything technically no emotions added.

“So what if my allergies become too much of a liability? Then you’d just pack up your things, and, well…” I paused as I tried to wrap my head around his way of thinking, “I guess you’d take my things too at that point and leave me to die?”
He blinked a few times, a slight frown on his face. “I guess there wouldn’t be any logical reason for me to stay…”


To top that off after the last battle with the Chancellor Zoe is no leading the dwindling Resistance with everyone cowering in fear or wanting to destroy the world as they know it. Zoe is lost and alone. One night everything goes wrong and Zoe loses control of her powers, again, leading the Chancellor right to them. Many don’t escape and when everything comes tumbling down Zoe runs for Adrien and leaves. Now on the run Zoe is forced to spend time with this boy who she once knew, who she once loved and let me just say he is a real jerk. No lie he says some extremely hurtful things. It’s odd though because even different in a lot of ways I still liked him! Weird right? I honestly still liked his character and even though he was different I still loved him.

On their travels they both run into a problem Zoe has no air. Keeping them both moving with her powers for days on end with no sleep begins to wear on Zoe and she doesn’t think she’s going to make it.

Zoe is a very different character in this book than in the first book where we were introduced to her. She’s lost a lot and after losing Adrien and then getting him back different it changes her a lot even from book two to three.

Zoe and Adrien have a lot of baggage between them since everything happened. After spending time with him though and finally seeing him seeing him as a person and not a broken boy things really start to change for her. Zoe comes to terms with the fact that Adrien may be different but he’s no less of a person and I think that’s a huge part of this book that really can play into real life which makes that aspect of the book and Zoe and Adrien’s relationship stronger but also more relatable.

Shutdown was amazing. I could not have pictured a more perfect ending for this amazing trilogy. I am really sad to see my characters leave because I could read about them for a long time. Heather Anastasiu, great job. Shutdown did not disappoint at all with high action scenes, bloodshed, and the high emotional angst that comes with these novels. The Glitch Series is definitely a series I would highly recommend to YA readers. Amazing, beautiful, and I honestly couldn’t put this book down for a second.

Teaser:
“And that’s when I felt the obstruction a couple miles ahead. The whole tunnel caved in."


Swoon:
I dug my hands into his hair, and he suddenly flipped me so that I was on my back. He hovered over me, bracing himself with one hand on either side of my body. He dipped down and kissed me deeply again. Then he moved from my lips and kissed his way down my neck. I arched up to him.<>

I played the piccolo in my high school marching band.
I paint a little bit, mostly portraits in oils.
So, the last name, I know it looks like Anastasia, but it has a U on the end: Anastasiu (rhymes with 'so-nice-to-see-you'). It's Romanian in origin.
I like tattoos. I know, you're shocked ;)
I was in a wheelchair for a year during college because of health problems. Being wheel-bound and knee-high for a year certainly changed my perspective on life (pun intended).
Yes, I am a fan of cheesy puns.
I've wanted to be a missionary, a psychologist, a professional flautist, a college professor, and now I've ended up being a writer - the secret secret thing I always wanted to be but never told anybody because I thought it too much of an impossible dream!
My favorite book is East of Eden because it blew open my world when I first read it at age 20.
I read more than I do anything else. Like hours and hours a day.
Wanna know how I get my hair so pink? It's HARD and it took me a long time to perfect my system. Here's a step-by-step blog about the process :)