Blurb:
After a bitter marriage, Paxton seeks respite from his loss. Rediscovering his writing, he never expected creating a piece worthy of reading nor for two unsuspecting paths to cross in the most unconventional of ways.

Thousands of miles separated them, yet he'd never felt closer to anyone. Finding out that happiness and love was attainable again, was one thing. Having Alissa, was another.

When the two meet, sparks fly, chemistry is beyond explosive, and emotions reach a boiling point. Their brief love affair ignited the fuse but what Paxton neglected to anticipate was that his son would fall for the sweet, meek demurred woman in Alissa or the fact the woman would be their salvation; in more ways than one.

My Review:
Wow that was one steamy read! A mans POV, the written word, and a failed marriage you will never see what happens in this book coming.

The story is told from Paxtons' point of view and the story goes over his failed marriage with a wife who has been cheating on him, but still refuses to sign the papers for a divorce. Paxton loves writing and he meets Alissa on a writing website and after a year of messaging they decide to meet. The sexual tension between them is thick and it isn't long before the clothes go flying out the window.

Once Written, Twice Shy is a very original story and while I wish I could have gotten more into the story of their online romance it was very interesting to be thrown in the thick of their first meeting. A quick steamy read are the words I would use to describe this original novel!

One of Five e-book copies of Once Written, Twice Shy

The winner will be announced at the end of the tour. 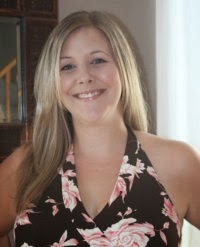 Born and raised in small town Northern Ontario, Canada, Carey Decevito has always had a penchant for reading and writing.

More than a decade later, with weeks of sleepless nights, where exhaustion settled into her everyday existence, she finally gave and put pen to paper (more like fingers to keyboard).

She submitted to the dreams that plagued her.  And the rest, as they say, is history!

Carey Decevito enjoys spending time with family and friends, the outdoors, travelling, and playing tourist in Canada’s National Capital region.  When life gets crazy, she seeks respite through her writing and reading.  If all else fails, she knows there’s never a dull moment with her prolific story-teller of a four-year-old daughter, her goofy husband and their two cats who she swears are out to get her.

With two published works under her belt, Once Written, Twice Shy is her second and the first book which is part of a five-book series entitled The Broken Men Chronicles.
Posted by Reese's Reviews at 1:01 AM