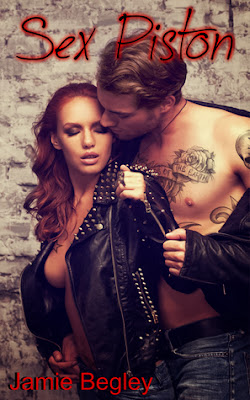 Blurb:
Sex Piston wasn’t about to apologize to anyone for her bitch attitude and certainly not the President of The Blue Horsemen, Stud. If he thinks he’s going to be able to control her and her crew then he has another thing coming. A lapse in judgment has him thinking that he’s won this battle of the sexes but a one-night stand isn’t about to bring this woman to heel.
Stud has to prove himself as the new President of the Destructors, and Sex Piston and her crew’s attitude isn’t helping. If he has to sacrifice his body to tame the bitch then that’s exactly what he’s going to do even if it means losing his heart in the battle.


My Review:
Sex Piston the book and the character were both a shock and I enjoyed the surprise I got after starting the book.

Sex Piston loathes Stud the new club leader. He affects her in ways she’s never been affected by any other man before. When she decides to not give an inch to Stud or any of the other men in the club Stud decides to take matters into his own hands.

I have to say there was a lot of stuff that happened in Sex Piston I didn’t see coming at all. I loved Sex Piston and her feisty attitude and how she didn’t take crap from anyone and didn’t allow people to do anything to her if she didn’t allow it. She’s super loyal and definitely a great character.

I had only one issue with this book and that was how it kept switching pov’s from Stud’s to Sex Piston’s without warning. It made me mad because I liked being in Stud’s mind and then suddenly I was reading from Sex Piston’s and I had no warning.

I highly suggest this book. It’s a quick read and will definitely take you on an interesting ride.

Check author out:
Posted by Reese's Reviews at 1:00 AM