Review: The Fantastical Life of Serenity 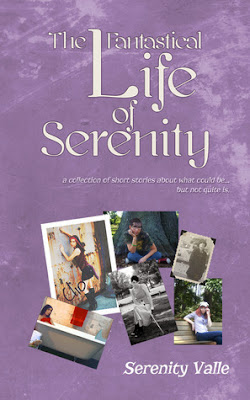 Book Info:
Title: The Fantastical Life of Serenity: A Collection of short stories about what could be...but not quite is
ebook
Published July 2nd 2013
Add to TRB Pile
Get Your Own Copy: Amazon

Blurb:
Serenity is your average, every day, somewhat nerdy young woman with a good job and a fairly non-existent social life. Though pretty, she hasn’t had a date in three years. She leads an overly mundane existence until, one night, a life-altering event shows her that maybe things aren't so boring after all. During her awakening, she meets an unlikely traveler to help her on her journey.

This anthology of five short stories unlocks doors hidden in-between worlds as it weaves a new perspective for Serenity to discover.


My Review:
I received a copy of The Fantastical Life of Serenity for an honest review.

Wow! I just can’t even express how awesome this story is. All of the short stories were completely amazing and beautifully written. This story is so uniquely written with such amazing and remarkable stories I couldn’t put this book down.

Each story had an amazing cast of characters and in each story a girl named Serenity who lives through these different lives which weren’t always perfect but some were filled with love, magic, and sometimes loss.

I have to say some of the stories ended in cliffhangers and when I would read the last line I would be like “NOOOOOO” The story was that good! While I wished I knew what happened it was super interesting to let me just read it and think of my own conclusion to the stories.

*sigh* Serenity Valle is an amazing author and I am so glad I had the opportunity to read this book. Great job Serenity! Can’t wait to read more from you!

I recommend this book to any and all who are looking for an great short story to read.

Serenity began writing short stories when she was 7 years old. She illustrated these stories as well, even though now she admits she can’t draw. Her parents would buy her extra school notebooks to write her stories in and her favourite place to write was under the carport during a rainstorm. She would sit at the picnic table and write for hours during summer storms. While still in high school, Serenity had nearly finished writing a full length novel. Unfortunately, the notebook fell out of her backpack during her Junior year (she believes on the bus) and was never found. Devastated, she turned from writing and threw herself into drama. For many years she participated in school musicals and community theater. She even had a very small (uncredited) part in the 2001 Tim Burton film “Planet of the Apes”. She did get to meet Burton though and said he was “eccentric but very nice”. She also did some modeling in the past few years and continues to pursue that venue as well.

During this time she began writing again for an online RPG game based on the show “La Femme Nikita” (one of her favourite shows of all time). Slowly, she began to have ideas for her own stories again but always found that the middle of the story was missing. She wrote the beginning and left it until her block was defeated. In 2013, Serenity started writing again full force.

Serenity is the wife of an author. She is mum to 3 boys, currently aged 20, 16 and 2. Serenity graduated from Cerro Coso Community College in 2002 with two Associates Degrees in Social Sciences and Humanities, then went on to graduate in 2005 from the University of California, Santa Cruz with a Bachelors in Psychology and a minor in Latin American/Latino Studies. She is a proud Banana Slug and a proud sister of Sigma Pi Alpha Sorority. In the little free time she has between family and writing, she enjoys gardening, reading, crafting things, henna art, and watching such shows as “Burn Notice”, “Covert Affairs”, “Warehouse 13″, “Law & Order SVU”, “Touch”, “Kitchen Nightmares” and others.


Check author out:
Posted by Reese's Reviews at 1:00 AM