The MARKED MEN are coming back on January 7, 2014, so get ready for the ride of your life with ROME (MARKED MEN #3) by the fabulous Jay Crownover.

You’ve met inked-up bad boy RULE (Marked Men #1) and have been swept away by the lyrical JET (Marked Men #2).  Now, get ready to be riveted by Rule’s older brother ROME.

Rome returns to Denver after serving his country and leaving a part of his soul, along with his blood, behind on the sands of the battlefield.   When he meets Cora, sparks fly and all bets are off in this steamy, heart wrenching love story.  Can two souls who have their own dark past survive the explosion of them coming together.  Find out in ROME on January 7th.

Be sure to join us (January 6th) when we are part of the Jay Crownover’s Rome Book Tour. 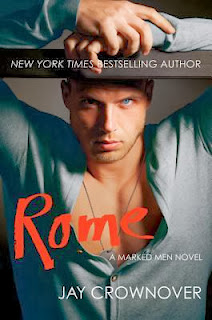 Synopsis
Cora Lewis is a whole lot of fun, and she knows how to keep her tattooed bad boy friends in line. But all that flash and sass hide the fact that she’s never gotten over the way her first love broke her heart. Now she has a plan to make sure that never happens again: She’s only going to fall in love with someone perfect.

Rome Archer is as far from perfect as a man can be. He’s stubborn and rigid, he’s bossy and has come back from his final tour of duty fundamentally broken. Rome’s used to filling a role: big brother, doting son, super soldier; and now none of these fit anymore. Now he’s just a man trying to figure out what to do with the rest of his life while keeping the demons of war and loss at bay. He would have been glad to suffer it alone, until Cora comes sweeping into his life and becomes the only color on his bleak horizon.

Perfect isn’t in the cards for these two, but imperfect might just last forever . . . 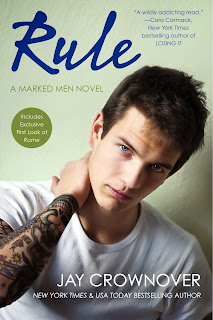 
Opposites in every way . . . except the one that matters Shaw Landon loved Rule Archer from the moment she laid eyes on him. Rule is everything a straight--A pre-med student like Shaw shouldn't want--and the only person she's never tried to please. She isn't afraid of his scary piercings and tattoos or his wild attitude. Though she knows that Rule is wrong for her, her heart just won't listen.To a rebel like Rule Archer, Shaw Landon is a stuck-up, perfect princess-and his dead twin brother's girl. She lives by other people's rules; he makes his own. He doesn't have time for a good girl like Shaw-even if she's the only one who can see the person he truly is.But a short skirt, too many birthday cocktails, and spilled secrets lead to a night neither can forget. Now, Shaw and Rule have to figure out how a girl like her and a guy like him are supposed to be together without destroying their love . . . or each other 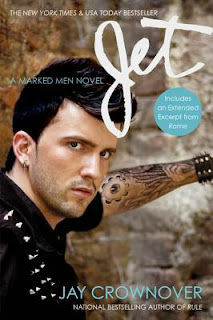 Synopsis
With his tight leather pants and a sharp edge that makes him dangerous, Jet Keller is every girl’s rock and roll fantasy. But Ayden Cross is done walking on the wild side with bad boys. She doesn’t want to give in to the heat she sees in Jet’s dark, haunted eyes. She’s afraid of getting burned from the sparks of their spontaneous combustion, even as his touch sets her on fire.Jet can’t resist the Southern Belle with mile-long legs in cowboy boots who defies his every expectation. Yet the closer he feels to Ayden, the less he seems to know her. While he’s tempted to get under her skin and undo her in every way, he knows firsthand what happens to two people with very different ideas about relationships.Will the blaze burn into an enduring love. . . or will it consume their dreams and turn them to ashes?