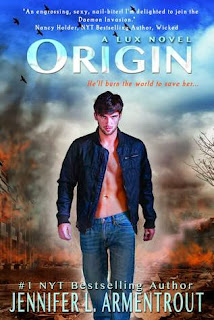 Blurb:
Daemon will do anything to get Katy back.

After the successful but disastrous raid on Mount Weather, he’s facing the impossible. Katy is gone. Taken. Everything becomes about finding her. Taking out anyone who stands in his way? Done. Burning down the whole world to save her? Gladly. Exposing his alien race to the world? With pleasure.

All Katy can do is survive.

Surrounded by enemies, the only way she can come out of this is to adapt. After all, there are sides of Daedalus that don’t seem entirely crazy, but the group’s goals are frightening and the truths they speak even more disturbing. Who are the real bad guys? Daedalus? Mankind? Or the Luxen?

Together, they can face anything.

But the most dangerous foe has been there all along, and when the truths are exposed and the lies come crumbling down, which side will Daemon and Katy be standing on?

And will they even be together?

My Review:
Holy mother of alien babies everywhere Just when I thought it couldn’t get any better Jennifer L. Armentrout came out with Origin.

Alien Babies:
There are actual alien babies out there! Who freaking new!?! I mean besides Luxen babies there are different alien babies out there. (Is this a spoiler?) The babies are super powered obviously because they’re freaking aliens and they are insane! Wow just wow. I didn’t think the Lux world could become any more complicated but BAM! A whole slew or the alien baby crazies came flying out.

Dual POV:
I am a huge fan of multiple pov books. I love reading multiple characters perspectives on things and Origin definitely is a great example as to why. Daemon and Katy as such a great duo and I think us as readers would have been really missing out if we didn’t get Daemons perspective as well. Definitely made the whole book more enjoyable and really made me love the characters even more.

Action Packedness:
Holy smokes there was action at almost everywhere point in Origin. Daemon, Katy, and some trusty alien sidekicks definitely know how to kick some major bootay and spin the world on its axis. I can definitely see an all-out war on the horizon. The humans had some awesomely destructive tech that readers I promise you that you will hate this technology…unless you don’t like aliens which if that’s the case don’t read this series.

The transformation of characters:
Wow, looking back to when I started reading the Lux series the characters have really changed and grown. I feel like in each book the characters grow more and more and I love it. If the characters would have stayed the same after everything that’s happened well they wouldn’t be likeable. Kat is strong and will do anything to protect her own. She is still that quick witted fierce character in the beginning just with more strength behind it. While she thinks in some ways she’s damaged I think she’ll realize she’s not. Daemon is still the arrogant, cocky, sexy character we fell in love with in the beginning. He’s got a heart of gold hidden under that sexy toned chest of his and he definitely shows his sensitive and caring side a lot more in Origin than anywhere else.

Evil Government set on Taking over Humanity!
Yup! I know the government has secrets and those secrets are aliens and weapons of mass destruction. They have cover-ups and secret facilities and go around the world stealing people and hoping they can make their own army of super soldier aliens. Be warned they are as evil as they appear.

Overall:
I loved it. I hated it. I laughed, swooned, and cried…sounds like the usual JLA book right? Origin is a deep emotional rollercoaster that only the strong can survive and will definitely leave you pleading for the next and final book in the series. If you enjoy any of Jennifer Armentrouts’ books you will enjoy the Lux series it’s action and emotion packed with an original story line and amazing witty characters.

I love teasers and quotes so here are some fantastic ones (with pictures) from Origin: # 1 NEW YORK TIMES and USA TODAY Bestselling author Jennifer lives in Martinsburg, West Virginia. All the rumors you’ve heard about her state aren’t true. When she’s not hard at work writing. she spends her time reading, working out, watching really bad zombie movies, pretending to write, and hanging out with her husband and her Jack Russell Loki.
Her dreams of becoming an author started in algebra class, where she spent most of her time writing short stories….which explains her dismal grades in math. Jennifer writes young adult paranormal, science fiction, fantasy, and contemporary romance. She is published with Spencer Hill Press, Entangled Teen and Brazen, Disney/Hyperion and Harlequin Teen. Her book Obsidian has been optioned for a major motion picture.
She also writes adult and New Adult romance under the name J. Lynn. She is published by Entangled Brazen and HarperCollins.